The columns discovered by Denem Orhun were part of the harbor of Atarneus, a city famed for its association with Aristotle.
By Joseph Golder February 11, 2022
Facebook
Twitter
Linkedin
Email 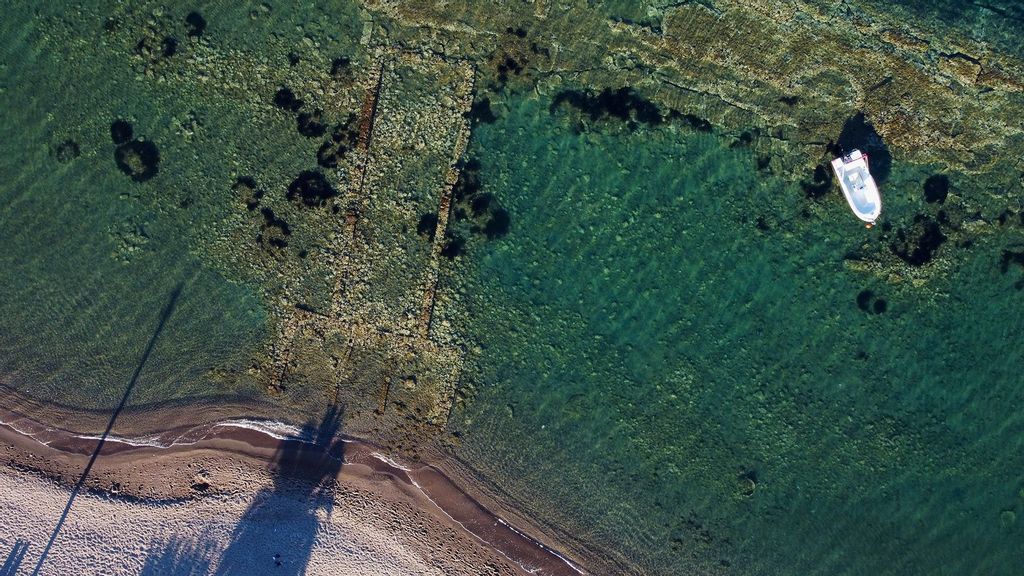 Denem Orhun found remains of a harbor belonging to the ancient city of Atarneus while diving in Izmir, Turkey. (Denem Orhun/Zenger)

A Turkish-American man on vacation in Turkey found the remains of an ancient, long-lost harbor, dating back thousands of years, while swimming in a bay.

The remains are part of the ancient Greek city of Atarneus, known as one of the locations where famed philosopher Aristotle once lived. Atarneus flourished in the 4th century B.C. under Hermias of Atarneus, Aristotle’s father-in-law.

The discovery was made nearly two years ago, but the find has just been revealed, after experts conducted year-long research.

Denem Orhun, who made the discovery while diving, told Zenger he had “chanced upon a round, sunken column amid some marble hewn by the ancients.” The discovery took place in shallow waters near a beach in the coastal town of Dikili, located in Izmir Province, in western Turkey.

Orhun, a software engineer working for the Brooklyn-based music company TuneCore, said he found multiple round columns while diving in the summer of 2020. They appeared to be part of a larger structure, so he launched his drone to get a bird’s eye view of the area.

Orhun, who now lives in Turkey, said: “I love to swim by my in-laws’ beach house in Dikili. There is a lengthy stretch of sand facing the Greek island of Lesbos, on the Aegean shore.

“There is a reef, which is referred to as the ‘King’s Road’ by the locals. Being unsure whether the reef was of natural or archeological origin, I frequently snorkeled around the area looking for clues. I chanced upon a round, sunken column.

“I waited for a calm day to investigate from a bird’s eye view, took some aerial imagery, which revealed the outline of a ruined building so covert, it was overt. The structure is not possible to apprehend from the shore, but some rocks are visible where the surf breaks.

“The beach venue nearby also displayed some columns and an ancient olive press strewn about its grounds.”

He later showed the images to Guler Ates, an associate lecturer at the Archeology Department of Celal Bayar University and of the Izmir and Bergama Museum.

Orhun thought the columns might belong to a historical structure, due to their resemblance to a second-century basilica he had seen near a lake in Iznik.

“My mom has a PhD in architecture from University College London. I grew up with an appreciation for and some knowledge of ruins, old towns and historical places,” Orhun said.

“I initially suspected a Byzantine basilica, based on the plan. I contacted the Bergama Museum and Dr. Ates. It was revealed the ruins were even more ancient: the Harbor of Atarneus.”

After experts from the Turkish Ministry of Culture and Tourism conducted their research, it was determined the large structure to which the columns belong was the ancient harbor of the city.

Orhun said: “Bergama Museum initially responded stating this was ‘the ancient Greek city of Kanei’, which is 30 kilometers [18 miles] away. I insisted this could not be correct, since the modern resort of Dikili is atop Atarneus.

“After a year of archeological surveys, my own drone footage and follow up, they came to the conclusion this is a pier belonging to the Harbor of Atarneus. The ancient city was abandoned, but the port seems to have been used until Byzantine days and possibly during the Turkish Beylik periods.

“The Bergama Museum has listed the sunken ruins as a Grade 1 archeological site, effectively placing them under its protection.”

Orhun said: “The structure is set to the east of the site, which is built on an east-west axis and consists of a portico with tripartite colonnades and an abscess on the open seaside. That’s why I thought it was a basilica. But the museum finally said this could be the harbor and the structure could be the pier structure.”

Atarneus has a storied history, particularly its association with Aristotle.

Aristotle was cared for and educated by Proxenus of Atarneus after the death of his parents. Proxenus might have been his uncle. While at the academy, the philosopher is said to have befriended Hermias, who would go on to rule Atarneus.

After the death of his most famous teacher, Plato (428–348 B.C.), Aristotle went to live with Hermias before marrying Hermias’ niece Pythia.