Rescuers reached the teens in seconds, but the fire department warns “not everyone is that lucky.”
By Lee Bullen February 11, 2022
Facebook
Twitter
Linkedin
Email 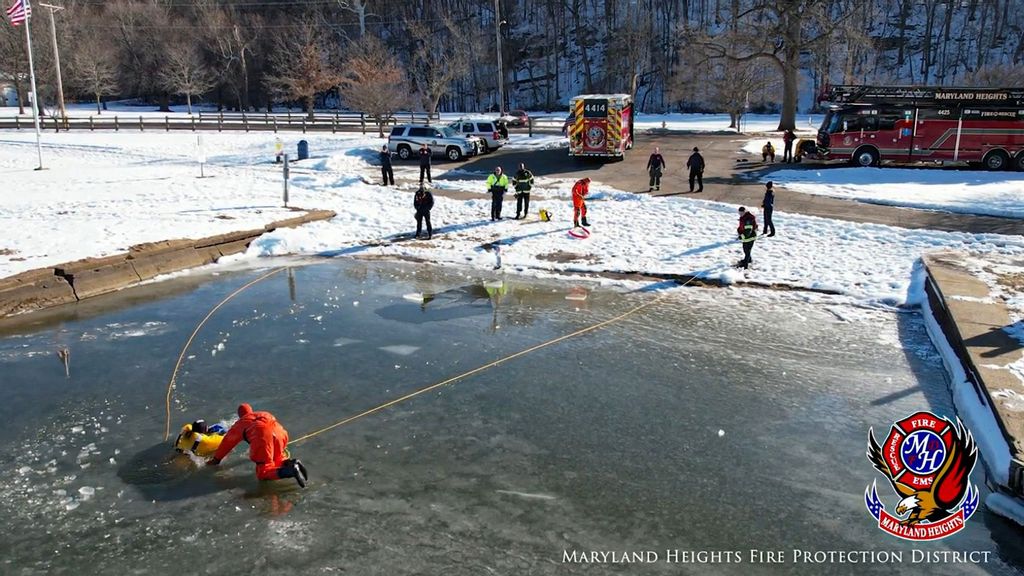 A firefighting training exercise turned into a real-life rescue when Missouri firefighters saved two teens who had fallen through the ice on a frozen lake.

The rescue took place at Creve Coeur Lake, in the St. Louis suburb of Maryland Heights on Feb. 8.

Maryland Heights Fire Protection District shared a video on social networks with the message: “What started out as a training exercise in Ice Rescue operations turned into a real-life emergency for two teens.

“The Maryland Heights Fire Protection District took advantage of the weather and the ice conditions at Creve Coeur Lake today. Training was wrapping up when one of our chiefs spotted two people running across the lake.

“In less than 15 seconds of the teens being spotted running across, the ice broke, and they were in the water. The crew that was still present went into response mode along with the two chiefs. A full response was requested.”

“Thank you to the Maryland Heights Police Department officers who assisted in the rescue.

“We ask one thing from everyone — stay off the ice! These two were lucky with their outcome because we had crews within seconds, but not everyone is that lucky.”

The boys, ages 17 and 15, were taken to a nearby hospital for medical exam and were later released.

One of the teens made it out of the water before Ogden Police arrived. Two officers fell in, and Weber County Deputies who arrived to assist also fell through the ice. Eventually, everyone made it out of the pond, and police said there were no significant injuries.

In mid-December 2021, Spokane County firefighters rescued a 19-year-old who fell through the ice at Fish Lake in Cheney, Washington, reported the Spokesman-Review. Fire Chief Cody Rohrbach said first responders tied a rope to a backboard and slid it out to him, then pulled the man to shore.

The teen was able to move 75 feet before the Fire District 3 firefighters got him to shore. His body temperature of 94 degrees indicated hypothermia, and he was taken to the hospital. Rohrbach said he believed the young man would be all right.