Over 1,000 manatees died of starvation last year due to the loss of seagrass, their primary food source.
By Martin M Barillas February 11, 2022
Facebook
Twitter
Linkedin
Email 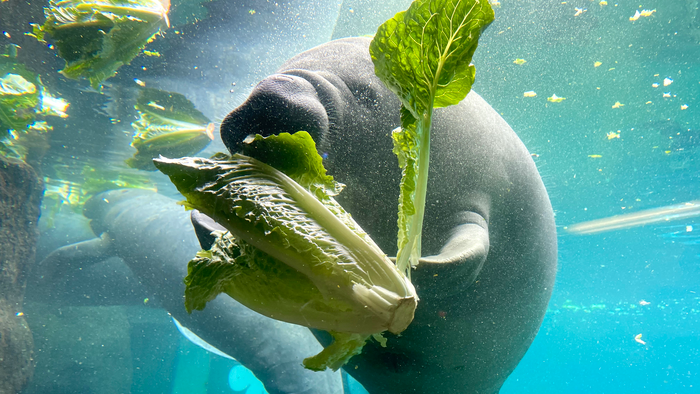 Manatees are given romaine lettuce to eat when algae is scarce in the winter. (Florida Atlantic University/Getty images)

Scientists are trying to understand why thousands of acres of seagrass have been lost after more than 1,000 manatees starved to death in 2021. In a study appearing in the journal Frontiers in Marine Science, they identified the culprit as phytoplankton blooms.

In 2021, a die-off of manatees (Trichechus manatus) was blamed on the scarcity of seagrass in Florida’s Indian River Lagoon, which is an estuary extending some 156 miles along the Gulf of Mexico shore. Seagrass is essential for the lumbering marine mammals’ diet. They eat at least 100 pounds of it every day.

They used large-scale maps that have documented the location of seagrass canopies since the 1940s in addition to surveys of fixed transects or paths that estimated changes in depths and the percentage of seagrass cover since 1994.

The researchers examined how the range of seagrass canopies or meadows in the Indian River Lagoon has responded to the availability of light, temperature and salinity. They found that between 1943 and 1994, about 7,400 acres of seagrass were lost. Between 2011 and 2019, approximately 58 percent of seagrasses were lost; their offshore margins moved toward the shore and became shallower.

The scientists found that this was because light was reduced during blooms of phytoplankton. These microscopic plants are individually too small to see with the naked eye. However, millions can bond together in huge swaths on the sea’s surface, darkening the water below and causing the loss of seagrasses.

Although temperature and salinity did reach stressful levels during the time observed, their effects would have been mitigated if there had been enough light.

“Light is mandatory for growth and [the] survival of seagrasses,” Hanisak said of his findings, adding that a reduction in light causes changes in seagrasses’ size and shape, as well as “decreased leaf length, leaf width, leaves per shoot and shoot growth.”

He noted that even though the plants can manage with reduced light for a little while, “once poor clarity becomes chronic or recurrent, detrimental effects on survival, resilience and recovery arise.”

To address the reduction in seagrass range, Hanisak and a team are growing it in onshore tanks and then transplanting it to restore the seagrass beds in the Indian River Lagoon.

“We are maintaining the seagrass nursery in a ‘ready mode’ so that we can readily partner with agencies and other interested parties in experimentation or pilot studies for seagrass restoration efforts,” said Hanisak.

In addition, the team is exploring the genetic diversity of seagrasses in the lagoon and how it can be harnessed in support of the restoration project. Part of this is the selection of strains of seagrass that grow rapidly and tolerate a broader range of environments.