Coastline erosion is a natural part of the lifecycle of barrier islands, but homeowners on these islands face an uphill battle.
By Joseph Golder February 11, 2022
Facebook
Twitter
Linkedin
Email 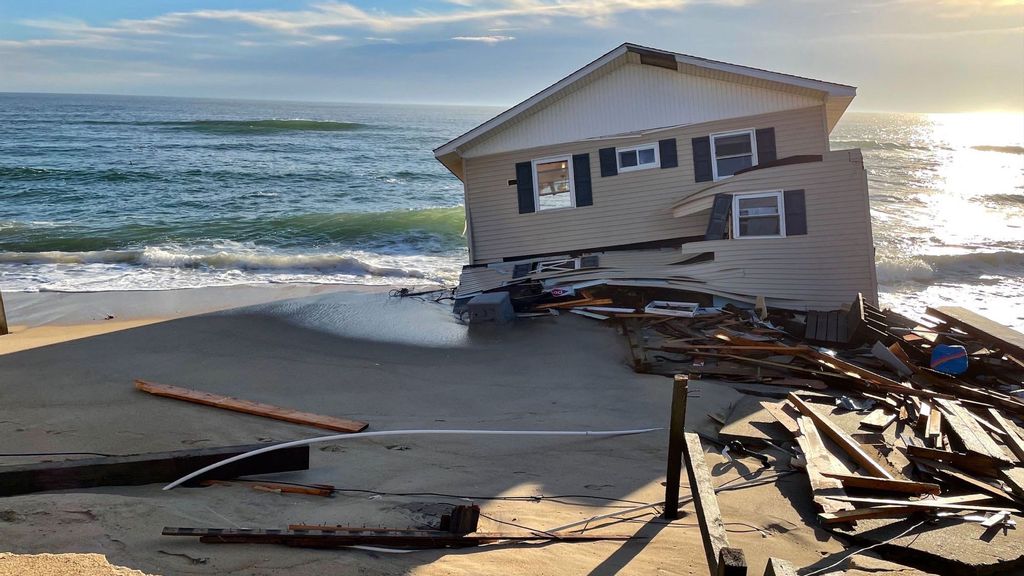 A home collapses into the ocean as rising seas eat away at the North Carolina coast, on Feb 9, 2022. (Cape Hatteras National Seashore/Zenger)

A home in North Carolina has collapsed into the Atlantic Ocean due to rising sea levels eroding the coastline, leaving piles of debris in its wake.

The incident took place in the unincorporated community of Rodanthe in Dare County, North Carolina. Sea levels in the state have risen progressively for decades.

The U.S. Geological Survey (USGS) website notes that Cape Hatteras, part of Hatteras Island, where the two-story house is located, is in a state of “constant flux — shaped by environmental and human forces including sea-level change, storms and infrastructure. Storms, shallow water and shifting sandbars have sunk over 1,000 ships off Cape Hatteras since 1600, giving this area the nickname the ‘graveyard of the Atlantic.’”

USGS scientists are working on a project to understand the dynamic sediment transport processes in effect around the barrier island of Hatteras and to assess the risks posed by storms and changing sea levels.

“Barrier islands are not static structures. They are extremely dynamic systems that are constantly changing and moving. Wave, wind and tidal energies are the primary factors that shape and regulate the barrier island ecosystem,” the Florida Oceanographic Society said in a report on barrier islands.

Administrators of the Cape Hatteras National Seashore, which is part of the National Park Service, shared images of the collapsed house on social media.

“Cape Hatteras National Seashore visitors should use caution when participating in recreational activities on the beach and in the ocean between the villages of Rodanthe and Salvo due to debris from a collapsed house,” the administrators said in the post.

The online post also warned locals that debris had been spotted far from the location of the collapsed building. “The bulk of the debris is at the site of the collapsed house, located at 24183 Ocean Drive, Rodanthe; however, smaller amounts of debris have been spotted as far south as off-road vehicle ramp 23, more than seven miles away.”

Vacationers who had rented the home as recently as 2019 left comments on the social media post expressing sadness over the loss of a beloved vacation home and all the memories it had contained. Others expressed concern that this was the latest in a series of collapses over the years due to shore erosion in the area.

Records show that the house was built in 1980 on flat sand among other single-family homes.

North Carolina first evaluated long-term average erosion rates for the state’s 300-mile coastline in 1979, the state says on its website.

“Barrier islands have always held a strong attraction to humans. Unfortunately, the nature of barrier islands is incompatible with our uses. As we build houses on the islands and use the inlets for navigation, we want the beaches and inlets to stay put, but the island moves. Our efforts to stabilize the islands have caused the loss of some of their natural defensive capabilities,” the Florida Oceanographic Society said in its report.