The duck had a fishing line and hook through its bill and tongue. It was saved thanks to quick-thinking volunteers.
By Joseph Golder February 10, 2022
Facebook
Twitter
Linkedin
Email 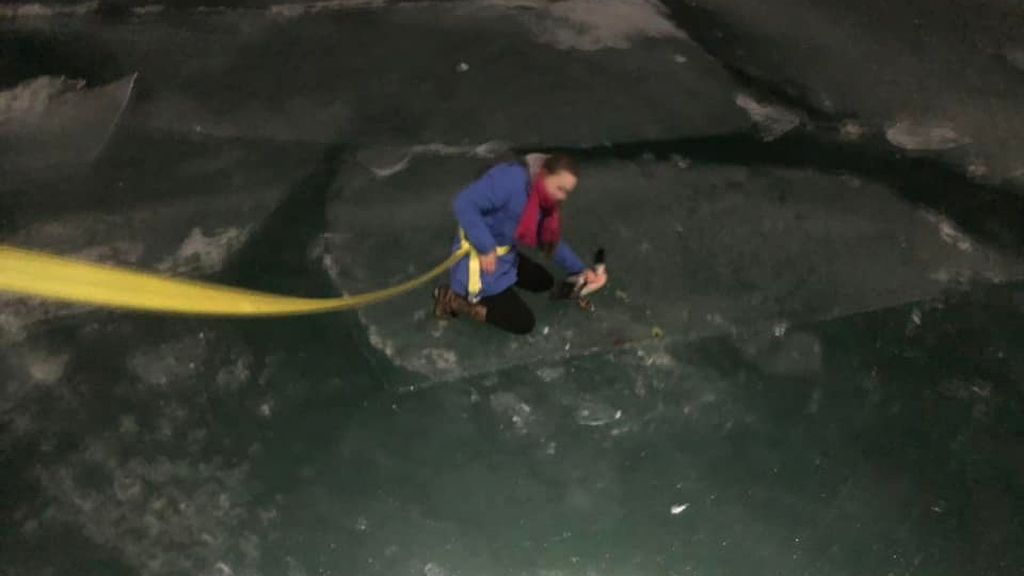 A duck was rescued from a frozen river in Detroit, Michigan, after it became stuck on the ice with a fishing line and hook through its bill and tongue.

The incident took place on the Detroit River in Michigan on Feb. 8.

The Michigan Duck Rescue and Sanctuary (MDRS), a nonprofit organization, shared the images online and said: “Team Duck, USA and what a wonderful night it was!

“Thank you all so much for the wonderful support and the sharing of the need for rescuing a little Goldeneye boy stuck on the Detroit River by a single strand of fishing line and a hook through the nare (the little slot opening on each side of a duck’s bill used for filtering their breathing) and then through his tongue.”

The rescue organization said the duck had luckily been spotted at about 4 p.m. on Feb. 8, stuck on the frozen ice.

It took three hours to rescue the duck. The MDRS said that it created a post on its Facebook page as soon as the sighting was reported. Within minutes, volunteers were on the road and heading out to save the animal.

The organization said the volunteers included locals named only as Mike, Angie, Todd, Zac and Kaitlyn.

The MDRS said: “We attached the tow-rope securely to the safety rail above the break wall and around Kaitlyn’s upper body. With a little hesitation on the first phase, Kaitlyn shimmied down the 6-foot wall and onto a firm piece of ice. Five feet away, where we first placed the ladder, she might have ended up in the drink.”

The group said the rescue was helped by the fact the ice had broken up a few days previously, with large pieces floating to shore and freezing again, solidifying the path on which the volunteers worked.

The rescue organization explained the risks involved for Kaitlyn, saying: “Once she shimmied down onto the first pane of ice, she became a little hesitant, but who wouldn’t, knowing what moved rapidly beneath in the Detroit River. I still had zero reservations about the ice failing. … If by some pure fluke she would’ve fallen through, we had between 500 and 600 pounds on the other end ready to pull her up quicker than a missile launching at Cape Kennedy.”

Kaitlyn quickly became more confident and got down on her hands and knees to spread her weight.

The MDRS said: “The ice didn’t even budge. She firmly secured the stranded angel in the comfort of her warm arms, then cut the line to freedom. She was much more confident and even quicker on her return to the ladder with all the guys holding it steady. As she got high enough, she handed me the freezing angel, and I then passed it off to Angie while Mike, Todd and Zac continued to get Kaitlyn back on solid ground.”

The volunteers removed the hook by cutting it and pulling it through the animal’s tongue.

“What an absolutely wonderful feeling knowing the baby would not die out on the ice because of a neglected fishing line left behind by a careless fisherman,” the organization said.

The rescuers said it appeared the duck had got into that predicament “when the ice was still soft in some spots” and “he went down searching for a winter snack, and came up hooked.

“Then he ended up on top of the ice as it slowly froze together. Even though he was spotted at 4 p.m., there is no doubt he had probably been out there for at least a few days at a minimum.”

The duck was handed over to the DAWG Rescue. The duck will be rehabilitated before being released back into the wild.