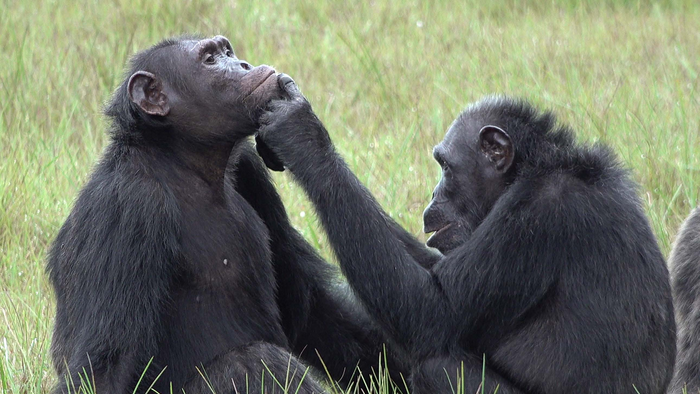 Roxy and Thea, who belong to a band of 45 chimpanzees living in Loango national park in Gabon, are being investigated by a team from Osnabrück University in Germany and the Ozouga Chimpanzee Project, led by cognitive biologist Simone Pika and primatologist Tobias Deschner. (Tobias Deschner)

Scientists observing chimpanzees applying insects to the wounds of their fellow apes have concluded that this previously undocumented behavior is proof that apes show empathy in the same way that humans do.

Researchers have been studying a specific group of chimpanzees, which share 99 percent of their DNA with humans, in the Loango National Park in Gabon for seven years.

In November 2019, Alessandra Mascaro and Lara Southern observed chimpanzees grabbing insects from the air and applying them to each other’s wounds. Mascaro captured the behavior on camera.

A year later, as the research team continued to monitor the chimpanzees, Southern observed a similar wound-tending event. She saw an adult female seize an insect and hand it to an adult male, dubbed Littlegrey, who had a deep open wound on his leg. After Littlegrey applied it to his injury, the female chimp was joined by two other chimps in touching the wound and rubbing the insect on it.

“The three unrelated chimpanzees seemed to perform these behaviors solely for the benefit of their group member,” said Southern.

The research team from Osnabrück University in Germany and the Ozouga Chimpanzee Project published their study in the journal Current Biology.

The team has focused for years on a band of about 45 chimpanzees at Loanga, examining their relationships, interactions and disputes with other groups, as well as their cognitive and communicative skills, hunting and tool use.

Study co-author Simone Pika of Osnabrück University called the wound-tending behavior clear evidence of prosocial behavior, or behavior invested in the interests of others, rather than just oneself.

“This is, for me, especially breathtaking because so many people doubt prosocial abilities in other animals,” she said. “Suddenly we have a species where we really see individuals caring for others.”

Wound-tending behavior was observed among chimps in the past but was limited in scope. “Self-medication — where individuals use plant parts or non-nutritional substances to combat pathogens or parasites — has been observed across multiple animal species including insects, reptiles, birds and mammals,” said Pika. Bees, bears and elephants are known to do it, too.

“Our two closest living relatives, chimpanzees and bonobos, for instance, swallow [the] leaves of plants with anthelmintic properties and chew bitter leaves that have chemical properties to kill intestinal parasites,” said Pika. In the past, chimps have been observed using twigs, for example, to extract tasty termites from rock-solid termite mounds. However, no one had observed chimps treating not only themselves but also others.

Humans are known to use several insect species to stave off sickness, Pika said, citing evidence dating back to 1400 B.C. She noted that insects can have antibiotic, antiviral and antiparasitic effects. The team theorized that applying insects to wounds may have an anti-inflammatory, antiseptic, analgesic or pain-relieving effect in the chimps.

An alternative explanation for the behavior is that if it has no beneficial effect, it may reflect the local chimpanzee culture in much the same way that human cultures do.

Going forward, the researchers want to identify the insects the chimps are using and observe which of them are applying the insects to others. “Studying great apes in their natural environments is crucial to shed light on our own cognitive evolution,” said study co-author and primatologist Tobias Deschner. Given apes’ importance to humanity, Deschner pleaded for their protection and the preservation of their habitats.

“We now aim to investigate the potential beneficial consequences of [their] surprising behavior,” he said.

“For me,” Pika said, “being interested in the cognitive skills of chimpanzees, it was particularly striking to witness that individuals not only treat their own but also the wounds of other nonrelated individuals. Such examples of clear prosocial behaviors are rarely observed in nonhuman species, but these observations may now also convince the skeptics.”

«Previous Post
Swiss Researchers Team Up With Lidl To Create Packaging Made Of Fruit And Vegetable Peels»Next Post
Boy On The Mend After Neighbor’s Dog Shook Him ‘Like A Chew Toy,’ Almost Killing Him