The beloved pet loves sleep, fish and attention. Its Canadian owner says there is nothing like the love she gets from her cat.
By Arian Movileanu February 8, 2022
Facebook
Twitter
Linkedin
Email 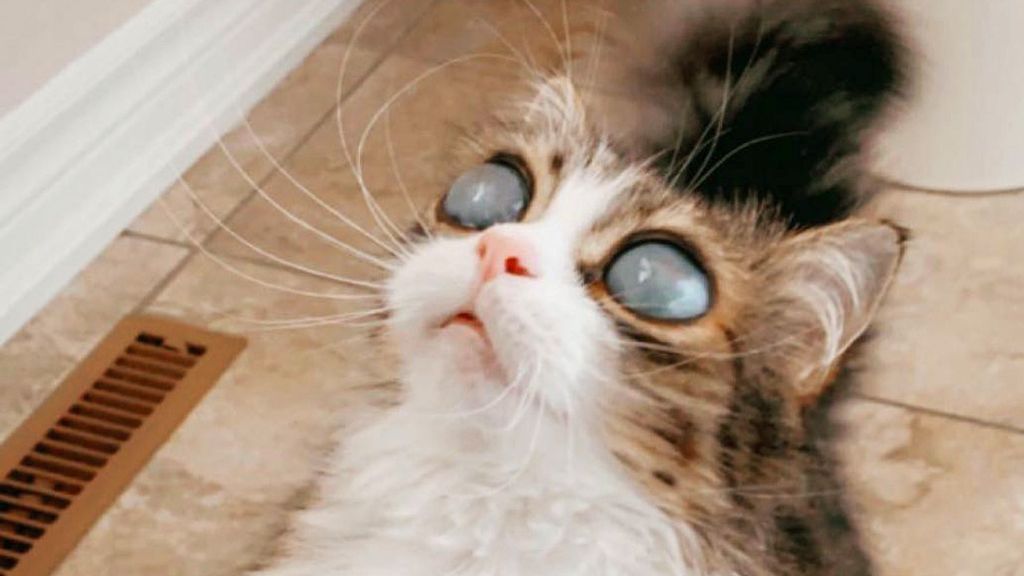 The blind cat from Canada, named Pico, has won the hearts of his teenage owner and an army of TikTok fans. (@pico_blindcat/Zenger)

A blind cat with two huge eyes like twin moons has amazed its owner by living life to the fullest, moving around the house and garden despite his disability.

Pico, who is nine years old, was diagnosed with bilateral glaucoma five years ago, when his eyes were bright green.

Monica, his teenage owner, said that as Pico slowly lost his sight, his eyes began to change color, acquiring a cosmic hue, which gave them a lunar look.

Still, Pico has won an army of TikTok followers, including 257,000 followers and 5 million likes on his page. They are amazed at his resilience, even if he no longer ventures too far from home.

Monica lives with Pico in Canada. She and her family adopted him after he was in a car accident. When not carefully exploring, his favorite pastime is sleeping.

“He also loves to eat soft food. He is very picky with his food, and it can’t be any sort of meat flavor — it either has to be tuna or fish.” If neither, Pico won’t eat it. “He also loves to have treats once in a while,” she said.

“He is obsessed when I brush him. He loves when I brush his under chin, and lastly, he loves attention. If no one is there, he will cry, so I always pet him and give him cuddles.”

Monica has been praised for caring for the disabled cat, but said it was really a two-way relationship. “Those who do not love animals are the people who have never experienced an animal’s love.

“If they have that one time when they can see or feel an animal’s love and appreciation toward them, they would change their minds.”

Having a disabled cat is a challenging task that includes keeping obstacles out of his way. Pico also needs daily medicine, including eye drops. “Apart from that, I love to take care of him, he is the most loving cat out there, and he follows me everywhere I go in the house,” she said.

“He’s cute, and I love him so much that I would never replace him.”

Monica says she always stays with him in the garden, but one time, when she got distracted, Pico vanished.

In a panic, friends and family joined in the search, without success. However, strangers turned up and told them there was a cat in a neighboring garden. The strangers were house-hunting at the time and eventually purchased the property, becoming Pico’s and Monica’s new neighbors.

“The couple bought the house because of Pico,” she said. “He was like a messenger who made us meet them and greet them, and they sensed a good vibe.”