Demolition of the tallest bridge ever taken down in Germany was a picture-perfect collapse.
By Joseph Golder February 8, 2022
Facebook
Twitter
Linkedin
Email 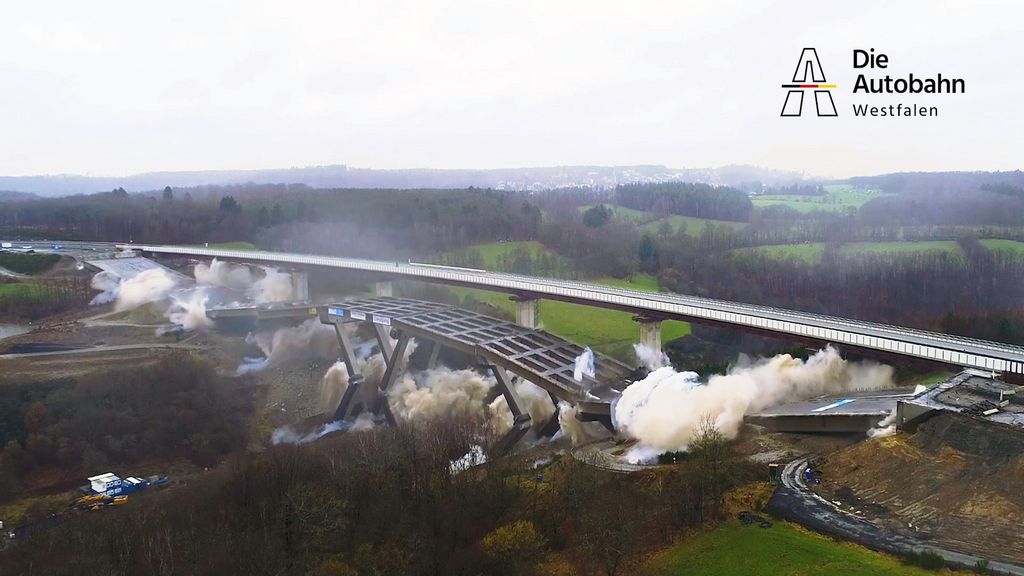 Dust rises after the blasting of the A45 Rinsdorf bridge in Rinsdorf, Germany, the tallest one ever taken down by demolition experts in the country. (Autobahn GmbH/Zenger)

A 1,640-foot-long bridge joining two sides of a German valley was blasted to smithereens as footage captured its 230-foot collapse to the ground, setting the record as the tallest bridge ever taken down by demolition experts in the country.

The demolition of the Rinsdorf viaduct, which allows the A45 freeway to cross the valley, took place near Wilnsdorf on Feb. 6 in North Rhine-Westphalia.

“Never before has such a high bridge been brought down in Germany. Now the bridge lies safely in its prepared fall bed. Eight pairs of pillars are folded like a folding rule, the superstructure has fallen vertically to the ground,” Die Autobahn GmbH, which since January 2021 has operated all of Germany’s motorways, said in a statement.

“It was a picture-book blast,” said demolition expert Michael Schneider, who oversaw the project.

The blast had to be carefully calculated so that the bridge would fall onto the prepared bed below without damaging the replacement bridge that can be seen in the footage next to the obsolete one shortly before it was blown up.

Numerous onlookers from the area reportedly showed up to watch the spectacle.

There are reportedly 15 viaducts now under construction in the country’s most populous state. Sixty bridges there are said to be need of replacement or urgent repair. Two more bridge demolitions are scheduled to take place in 2022.

“This was an extraordinary challenge given the special circumstances of the pandemic,” Oliver Luksic, parliamentary state secretary at the Ministry of Transport and Digital Infrastructure, said after witnessing the demolition. “It was something special to experience such a technically demanding blast. This is an important signal to speed up the road construction work, especially in North Rhine-Westphalia there is a lot to do. For us, the focus is on preservation and renovation.”

He said the German government would invest $5.13 billion in the area this year. The Westphalia branch of the federal Autobahn GmbH looks after about 860 miles of autobahn and is responsible for around 2,330 bridges and 11 tunnels, the agency’s statement said.