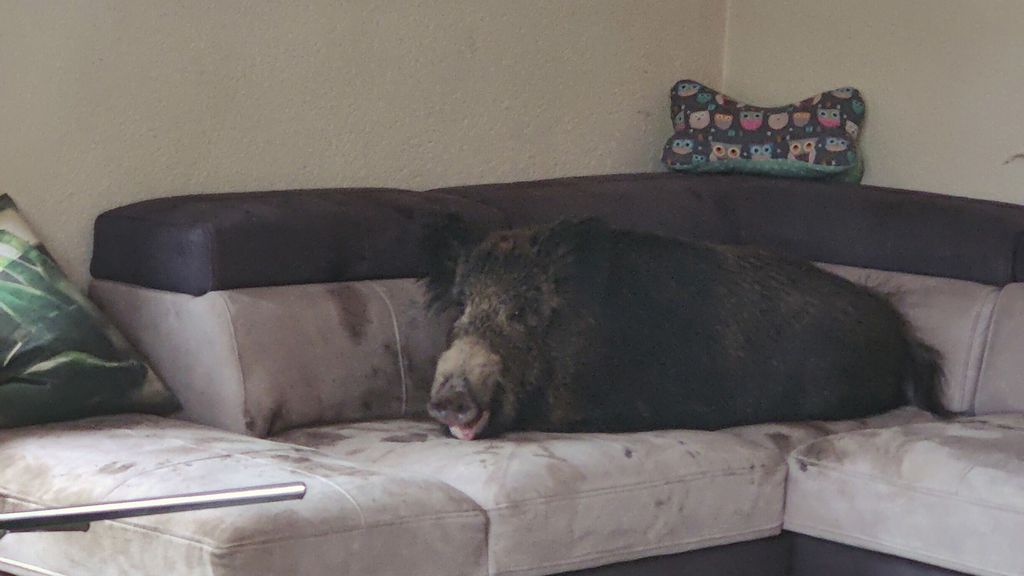 A wild boar destroyed a woman's home in Hagen, German, on Feb. 4, then took up residence on her couch. (Polizei Hagen/Zenger)

A woman got the shock of her life when she arrived home to find her house in tatters and a wild boar relaxing on her sofa.

The unnamed woman, who lives in Hagen, Germany, discovered the wild animal on Feb 4.

The wild boar was just 10 feet away from the woman, according to a police press release, but it did not notice her. Its head was turned away at the moment she opened the door to the living room.

The woman closed the living room door immediately and called the police, with a patrol car quickly arriving on the scene.

Hagen Police said: “The wild boar had wrecked the furniture and had made itself comfortable on the living room sofa. It probably entered the ground floor through a patio door. When the door shut, it got trapped.”

The officers, along with an authorized hunter, then worked out how to return the dangerous 132-lb animal back to nature without stressing it.

They eventually did so by a simple method: They opened the front door and let the wild animal find its own way out, which it did before exiting the woman’s property over a fence.

Hagen Police said: “At this time of year, wild boars protect their young ones from enemies. Do not approach young animals, keep them at a distance. And if one turns up in your living room, call the police!”

The wild boar, also known as the European wild boar, is the largest of the wild pigs. It is native to forests throughout the world, including Northern Europe. North Arica and China. The species was first introduced to the West Indies by Christopher Columbus in 1493.

Wild boars live in groups, and are notable for being swift, nocturnal, omnivorous and dangerous. Males usually don’t breed until 12 to 18 months of age. The average litter size is four to six babies, with a four-month gestation period.

Wild pigs have been listed as one of the top 100 worst exotic invasive species in the world. Some 14 species have been driven to extinction as a direct result of impacts from wild pigs, according to a 2021 study published in Nature. In addition to their destructive impact on wildlife and plant communities, they disturb the ecosystem structure with their rooting and digging behavior.

They are dangerous to humans in attacks, which can be deadly, and they spread diseases, such as tuberculosis, hepatitis E and influenza A.