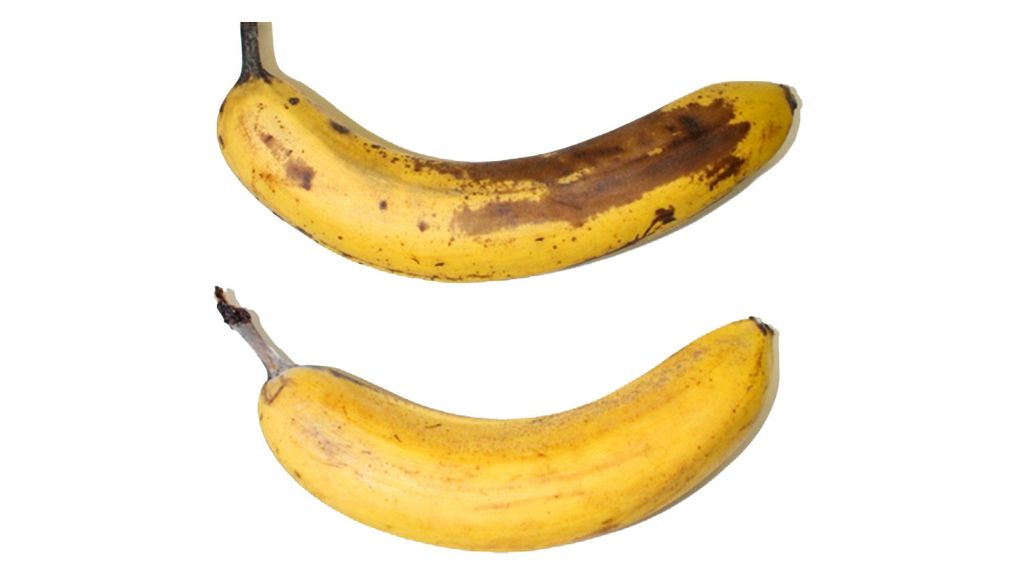 Two 10-day-old bananas; the bottom one is protected by a cellulose coating developed by the Empa research institute in Switzerland. (Manifesto Films, Lidl Schweiz, Empa/Zenger)

Swiss researchers have teamed up with supermarket giant Lidl to create packaging for fresh fruit made out of the peels of squeezed fruit and vegetables. The new packaging keeps fruit fresh longer, and its creators say using it can reduce plastic use in supermarkets and help curtail food waste.

Scientists at Empa, the Swiss Federal Laboratories for Materials Science and Technology, in collaboration with Lidl Switzerland, set out to create packaging from renewable raw materials.

Gustav Nyström, head of Cellulose and Wood Materials Lab at Empa, and his team spent more than a year developing the protective cellulose coating. Nyström explained that the idea was to use the solid residue left over from juice extraction, called pomace, which is routinely discarded, and turn it into fibrillated cellulose.

The fruit and vegetables coated with the material in tests remained fresh for significantly longer than those without. The shelf life of bananas with the coating was extended by more than a week, according to the researchers’ study, published in the journal ACS Sustainable Chemistry and Engineering.

According to lab, the cellulose is easy to wash off and can be used without causing harm to the consumer.

“The big goal is that such bio-coatings will be able to replace a lot of petroleum-based packaging in the future,” Nyström said. He noted that his team’s bio-coating comes from the same products to be protected and has to be washed, dried, ground and then processed into a material that forms a web-like mesh.

The coating can either be sprayed directly onto the fruit, or the food can be dipped into it.

“After drying, a film in the micrometer range forms that you can neither see nor feel,” Nyström said. “The elegance lies in the circular approach. We can still improve this value. However, the cellulose layer cannot compete with a performance like that of plastic.”

However, the researchers said that the potential of cellulose coating has not been fully unleashed, and they plan to enrich it further with vitamins and antioxidants.

After the completion of the research, the cellulose layer developed at Empa will be tested and further improved over the next two years in working with Lidl Switzerland and a fruit and vegetable supplier.

The Swiss authorities reportedly plan to allow the coating to be used in all 150 Lidl stores in the country following a successful main trial.

But until their new material can reach the broader market, the researchers say the plastic packaging used for cucumbers is still better for the environment than the food waste that might occur without it.

Empa researchers followed the path of a cucumber from the grower in Spain to a Swiss supermarket. The plastic wrapping accounted for only 1 percent of the environmental impact caused by production and transport. Overall, they found the positive effect on the environment from less food waste was nearly five times higher than the negative effect of the packaging.