Greenhouse growers could save millions on energy costs with a new system of sensors that predict weather and sunlight. 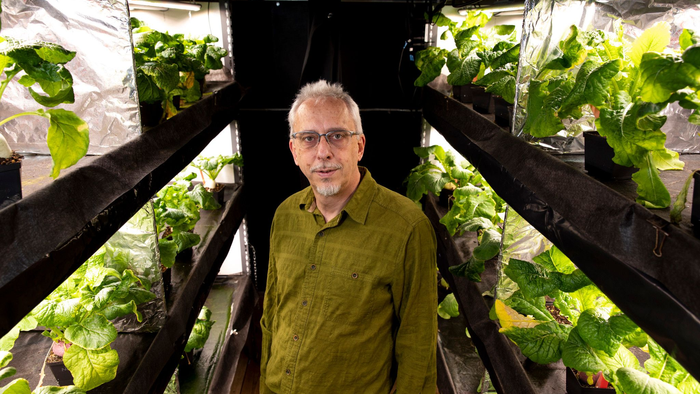 University of Georgia biologist Marc van Iersel among turnip plants in a grow room at his greenhouses, where he experimented with ways of lowering electricity costs by predicting plants' requirements for light based on the time of year. (Andrew Davis Tucker/University of Georgia)

A predictive lighting control system, connected to the internet, can predict sunlight and run electric lights in greenhouses in a way that will sharply reduce operators’ electric bills.

Researchers at the University of Georgia have published a study in the journal Plants that offers farmers a way to use electric lights only when needed and thus reduce costs by as much as 33 percent.

Plants receive additional lighting on rainy or cloudy days, which can be expensive and place a heavy load on the grid. Horticultural lighting consumes $600 million worth of electricity per year, according to a 2017 report from the U.S. Department of Energy.

LED lights, however, reduce costs. “When LED lights first came to market, they gave us an opportunity to control greenhouse lighting on a level that was not possible before,” said study co-author Marc van Iersel of the University of Georgia. “At the time, a lot of research was happening to optimize the lights themselves, but almost no one was working on smart control of the lighting system.”

The team built a system of sensors to monitor the weather and designed light-predicting algorithms. This enables them to predict the amount of sunlight that can be expected in the future to optimize the lighting.

The team studied greenhouses during the winter and spring months, which is when they are predominantly used. The results showed that plant growth was maintained while costs were reduced. During the spring, the team reduced costs by 33 percent, but the winter showed only a 4 percent reduction. The researchers found that energy costs drop during the spring when there is more sunlight, as opposed to during winter when more artificial light is needed to compensate for fewer daylight hours.

However, the team believes that actual future savings may be even greater as the study assumed a fixed cost for electricity. In reality, greenhouse farms can see varied prices for electricity. The system the team devised is programmed to take these variables into account. Future research could reveal the resulting savings.

Commercial cannabis growers may see the most benefit from this research. In Washington and Idaho alone, their electricity usage will grow from about 200 megawatts per year in 2022 to 300 megawatts by 2035, according to the Northwest Power and Conservation Council. Cannabis is legal to purchase in 33 states for recreational and/or medicinal use, while there are states that allow commercial growing.