The lack of ancient megalodon skeletons has led to conjecture about its size and shape.
By Martin M Barillas February 7, 2022
Facebook
Twitter
Linkedin
Email 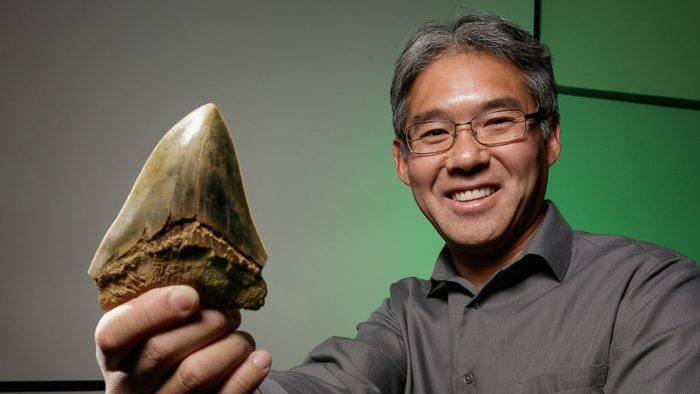 While megalodon sharks were indeed prehistoric giants, their shape may have differed from modern sharks, according to a new study.

Otodus megaladon hunted in the world’s oceans 15 to 3.6 million years ago. So far, they are known only by some vertebrae and enormous teeth, which resemble the smaller teeth found in modern great white sharks. Scientists have conjectured that the megalodon was 65 feet long, even though no complete skeleton has ever been found.

“The cartilage in shark bodies doesn’t preserve well, so there are currently no scientific means to support or refute previous studies on O. megalodon body forms,” said Phillip Sternes of University of California-Riverside. Sternes is the lead author of a study on the subject published in the journal Historical Biology. So far, paleontologists have inferred the body shape of megalodon from what they know about modern sharks.

Great white sharks (Carcharodon carcharias) are unlike other fish because they are partially warm-blooded. “Great whites are among the fastest swimming sharks, so Megalodons were likely also big, fast sharks you would not want to run into in the open ocean,” said Sternes. The megalodon, he believes, may have been similarly warm-blooded.

Great white sharks belong to the Lamnidae family, or lamnids, as do longfin and shortfin mako, porbeagle and salmon sharks. The new study examined whether these five species differ in shape from the rest of the order, which includes sharks that are cold-blooded. They also compared the five species to each other and to the rest of the Lamniformes order. Based on detailed drawings from the field, they made quantitative comparisons of their fins, heads and body shapes.

The authors did not find any general pattern among the body-shape differences. “Warm-bloodedness does not make you a differently shaped shark,” Sternes said.

“Any meaningful discussion about the body form of O. megalodon would require the discovery of at least one complete, or nearly complete, skeleton of the species in the fossil record,” study co-author Jake Wood said.

Instead of using actual organisms or photos to make comparisons, Sternes pioneered the use of two-dimensional drawings to compare specimens, some of which are hard to access.

“The purpose of field guides is to identify a species, so the drawings must be accurate representations,” he said. “It’s a technique widely used in biology and works well for sharks.” It can also be used to study snakes and birds, for example, and other specimens are difficult to collect.

The authors believe that, two-dimensionally, there is no relationship between warm- or cold-bloodedness and body form within the Lamniformes order.

“Although it is still possible that O. megalodon could have resembled the modern great white shark or lamnids, our results suggest that the two-dimensional approach does not necessarily decisively allow the body form reconstruction for O. megalodon,” said Wood.

“This study may appear to be a step backward in science,” said co-author and paleobiologist Kenshu Shimada of DePaul University. “But the continued mystery makes paleontology, the study of prehistoric life, a fascinating and exciting scientific field.”