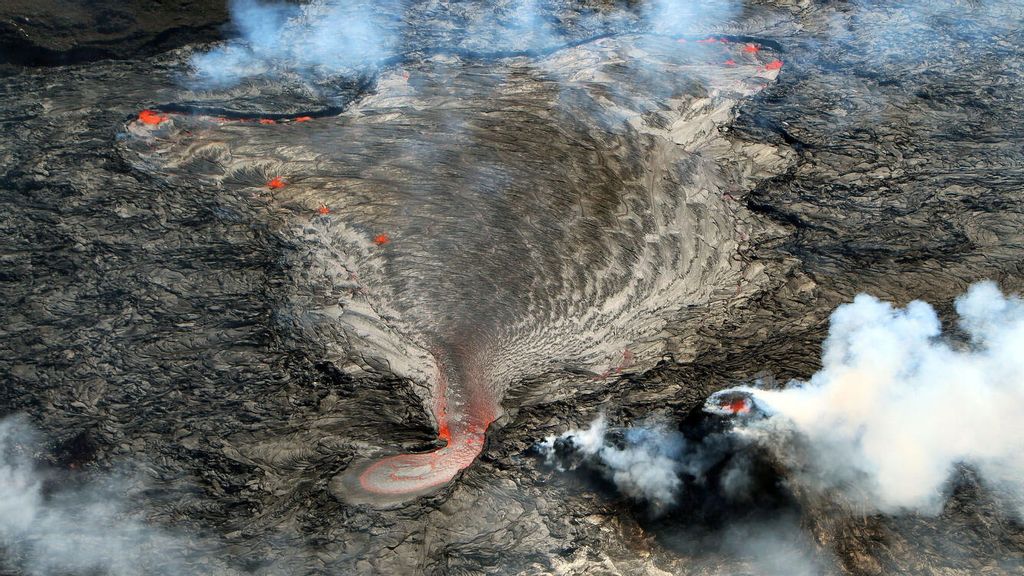 The western part of Kilauea's current summit eruption shows the active part of the lava lake in the Halema‘uma‘u crater in Hawaii on Feb. 1. (USGS, D. Downs/Zenger)

Lava spewed from the K&imacr;lauea volcano in Hawaii is still flowing like a river, according to a February assessment of the continuing eruption that began on September 29, 2021. Lava activity is now confined within Halema‘uma‘u crater in the closed area of Hawaii Volcanoes National Park, officials say.

The U.S. Geological Survey (USGS) shared images on social media on Feb. 3. The video clips depicted recent activity at the lava lake in Halema‘uma‘u crater at the summit of K&imacr;lauea.

“Lava upwelling at the western vent flows into the lake, where bubbling is commonly present. In the eastern portion of the crater, a steep spatter cone has produced vigorous spattering and small lava flows,” the USGS said in a statement.

“[Hawaiian Volcano Observatory] scientists collect detailed data to assess hazards and understand how the eruption is evolving at Kilauea’s summit, all of which are shared with the National Park Service and emergency managers.”

The USGS statement said Kilauea’s summit glow comes and goes frequently now due to a pattern of pauses in lava lake activity within Halema‘uma‘u crater over the last two and a half months. “Cycles last several days to a week and consist of a couple days of visible lava lake activity, followed by one to three days without lava,” the statement said.

Four main data streams are being monitored by scientists to help them and officials understand why K&imacr;lauea has been behaving the way it has.

“Tilt data records ground deformation of the volcano and is thought to reflect the pressurization level of Kilauea’s shallow summit magma chamber,” the USGS statement said.

”Kilauea’s summit region has remained relatively flat since mid-October, but superimposed on the flat signal are small, pronounced deflation/inflation events. This is the first monitoring signal to show change when the cycle is beginning.”

The Hawaiian Volcano Observatory monitors Hawaiian volcanoes K&imacr;lauea, Mauna Loa, L&omacr;ihi, Hual&amacr;lai, Mauna Kea and Haleakal&amacr;. K&imacr;lauea and Mauna Loa are the most active.  A 2018 eruption of K&imacr;lauea destroyed more than 700 homes as 13.7 square miles of land were inundated by lava.

“As a result of the activity from the 2018 eruption, Halemaʻumaʻu crater grew from 280 feet deep to about 1,600 feet deep, and the diameter more than doubled. By September the eruption had concluded. Though the drama of the 2018 eruption ended, K&imacr;lauea remains one of the most active volcanoes in the world,” the U.S. National Park Service says on its website.