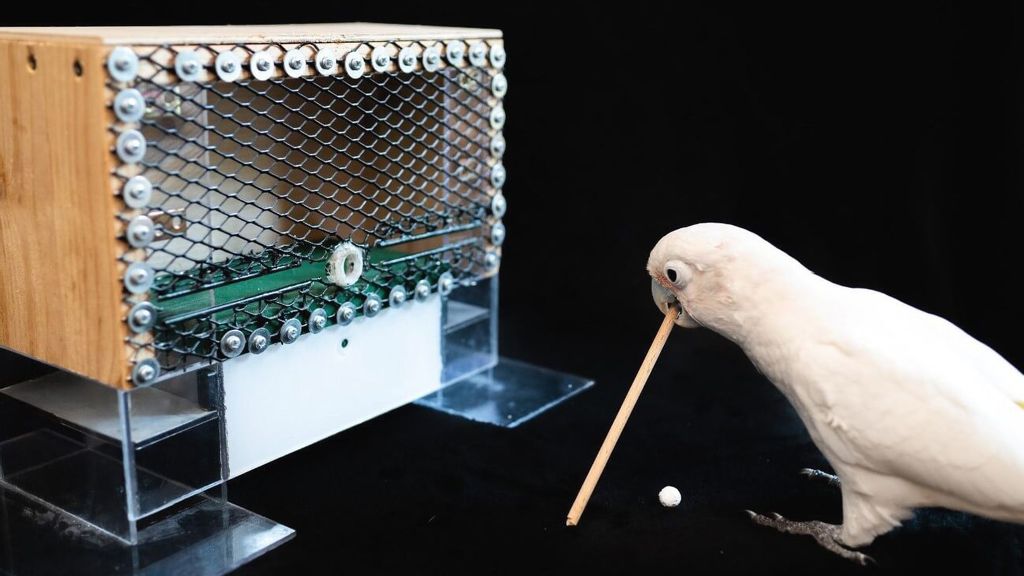 A cockatoo demonstrates the use of complex combined tools in an experiment conducted by researchers in Austria. (University of Veterinary Medicine, Vienna/Zenger)

Your newest golfers might be the only ones who truly play for nuts — cashews, that is.

In studying the problem-solving skills of Goffin’s cockatoos (Cacatua goffiniana), also known as the Tanimbar corolla, Austrian researchers tested whether the birds would push a stick to hit a marble into a hole that hid a cashew reward.

“I wanted to design an experiment to test the extent to which these amazing creatures pay attention to simultaneous actions when using tools,” Antonio Jose Osuna Mascaro of the Messerli Research Institute of the University of Veterinary Medicine in Vienna said.

Goffin’s cockatoos are considered a particularly tool-loving bird, and they learn how to use new objects through exploration and play, just like humans, researchers said.

“I couldn’t easily mimic the way other tool users like chimpanzees crack nuts with rocks because cockatoos don’t have hands, so I had to come up with a task that allows movements that are more natural for these animals. The answer was in front of me on my way to the lab: a golf course,” Osuna Mascaro said. “A golf-like task would allow me to test the animals’ ability to perform combined tool actions.”

The task consisted of a green-carpeted platform housed in a box with a latticed front. Each side of the green had a rectangular hole with a trap door underneath. During the experiment, one of the two trapdoors was baited with a cashew nut. In the front grille was a central hole through which a heavy white marble could be inserted. Using a stick positioned through the grate, the bird could push the ball into one of the holes on top of the trapdoor, releasing the cashew if chosen correctly.

“Three of our cockatoos managed to use the stick in such a way that they could hit the ball into the right hole and get the reward, a real demonstration of tool innovation at a very high level,” Osuna Mascaro said.

“One of the most amazing aspects of the exercise was watching these animals each invent their own technique for grabbing the stick and hitting the ball, sometimes with amazing dexterity.”

Osuna Mascaro said one of the birds held the stick “between its upper and lower jaws, another between the tip of the beak and the tongue and another with its claw, much like a primate.”

“This is the first example of the combination of these abilities outside primates and indicates that the cognitive preconditions for composite tool use have also evolved outside the primate lineage,” the researchers wrote in their study, published in the journal Nature.