The rare Goeldi's monkey is smaller than expected, weighing only an ounce at birth.
By Lee Bullen February 6, 2022
Facebook
Twitter
Linkedin
Email 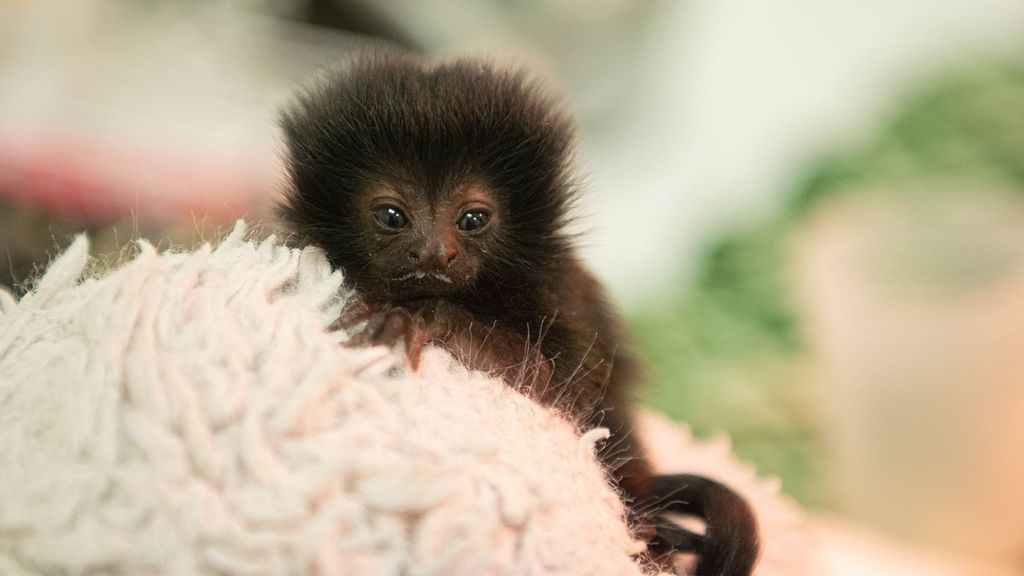 A tiny baby Goeldi's monkey at her enclosure in the Houston Zoo in Texas. (Houston Zoo, Jackelin Reyna/Zenger)

A monkey infant that weighs the same as a light bulb hugs a teddy bear and dozes off as a Texas zookeeper brushes its hair.

Betty, the Goeldi’s monkey, was born at Houston Zoo in Texas last month. The tiny animal is being raised by zookeepers, after it was rejected by its mother.

Houston Zoo said in a statement on Feb. 2: “On Jan. 15, 2022, the primate keepers at the Houston Zoo found a surprise waiting for them when they approached the Goeldi’s (pronounced ‘gell-dees’) monkey night house — a tiny baby hanging onto a branch in her enclosure.

“The team moved swiftly to reintroduce her to her mother, Kylie. The animal-care professionals found the infant to be significantly smaller than a typical Goeldi’s newborn. Usually, the primates are around 50 grams [1.7 ounces] or larger at birth, but this one weighed only 34 grams [1.1 ounce], about the weight of a standard light bulb.

“Unfortunately, attempts to encourage Kylie to take the baby, named Betty in honor of the late, beloved actress and animal lover Betty White, were not immediately successful. So the team made the decision to hand-raise Betty, while continuing to encourage parental bonding.

“Betty and both of her parents, Kylie, and father Opie, were moved to the zoo’s state-of-the-art Animal Hospital to further her care under the supervision of the veterinary staff.

“The Houston Zoo is following best practices established by the Association of Zoos and Aquariums Species Survival Plan for Goeldi’s monkeys, which has seen the successful raising of Goeldi’s monkeys in the past.”

The smallest to be raised to adulthood was 42 grams (1.4 ounces).

The zoo team anticipates the hand-raising process to take more than three months. During this period, Betty will spend as much time as safely possible with her family, who will always be within sight of their baby.

The Houston Zoo’s animal care team has extensive knowledge in hand-raising primates. Late last summer, the team spent months raising a ring-tailed lemur, Cleo, who was smaller than expected at six weeks. Cleo was not using her hind legs to grip her mother as tightly as she should, but has made great strides at rejoining her troop.

“Goeldi’s monkeys are small, predominantly black New World primates that weigh around a pound. They live in groups of two to 12 individuals in the Amazon rainforest and are mostly arboreal, meaning they can be found up in the trees.”

Houston Zoo said: “A female Goeldi’s monkey is pregnant for about five months, after which, she typically gives birth to a single offspring, who she carries on her back for about a month before allowing dad to take his turn carrying the baby.

“Baby’s size and strength is imperative to survival for infant monkeys, and if they are too small or cannot grip onto their parents’ fur, they will not survive un-aided by animal-care professionals.”

This rare monkey has a head-and-body length that ranges from 7.5 inches to 9 inches. Communication among Goeldi’s monkeys includes a wide range of vocalizations. Young infants use a whistle-like call to get the attention of their mothers.