Thurman announces “One-Time is back;” Shields declares “I don’t like” Marshall. 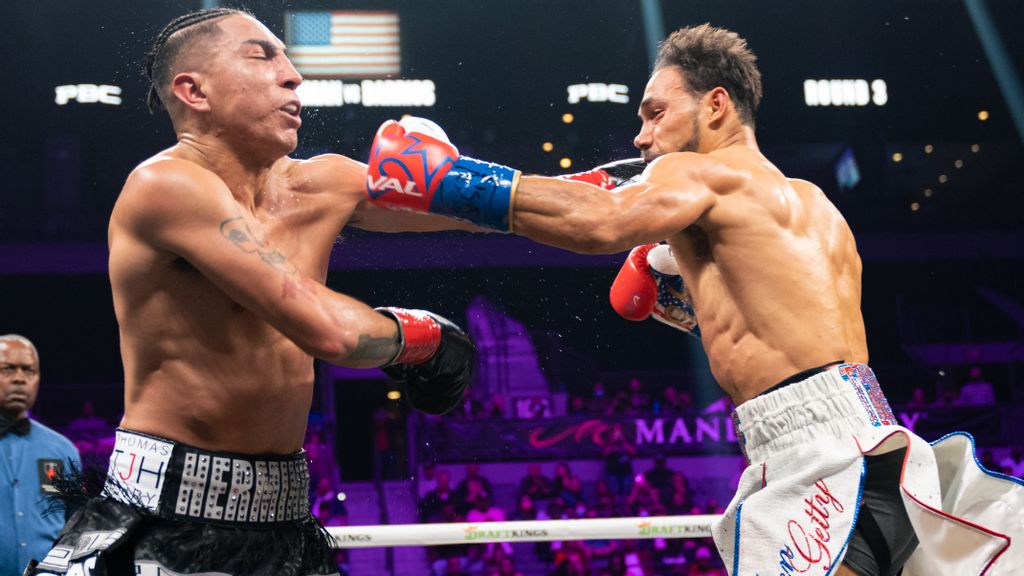 Keith Thurman returned in dominant fashion from his first loss and a 31-month ring absence with Saturday’s battering of Mario Barrios.

“One-Time” left “El Azteca” with a swollen face, blood streaming from his badly bruised nose, and a cavernous, leaking laceration over his left eye following a one-sided unanimous decision loss in their 147-pound clash of former champions at Michelob Ultra Arena in Las Vegas.

Despite injuring his left hand after delivering an apparent third-round uppercut, the 33-year-old Thurman (30–1, 22 KOs) displayed speed, double-fisted power and mobility throughout against Barrios (26–2, 17 KOs) in his first bout since being dethroned as WBA welterweight champion via one-knockdown, split-decision loss to eight-division title winner Manny Pacquiao in July 2019.

“It was a left uppercut. It bruised one of the knuckles and made me not wanna throw that punch anymore. But I was getting him with the right [hand.] I cut him with the right. I rocked him a few times,” said Thurman, who, nevertheless, had advantages in overall punches (181–105), power shots (135–82) and jabs (46–23) against Barrios.

“I said, ‘look, who cares about the knockout. We’re gonna box hard, we’re gonna box smart.’ We rocked him. We weren’t able to put him down and out, but we had a great performance. We had a great fight. He was a tremendous athlete in the ring and he was very poised. He has a good future ahead of him. Congratulations Mario Barrios. You couldn’t get One-Time, but you’re a great fighter.”

A 26-year-old who had gone 10–0 (9 KOs) at 140 pounds, Barrios had risen in weight since June, when he lost his 140-pound title via come-from-behind, 11th-round TKO loss to southpaw Gervonta “Tank” Davis, being dropped twice in the eighth and once in the final round.

“This was kind of the fight I was expecting. He was saying he was gonna knock me out and all of this stuff and that I couldn’t hurt him. But I think we all saw that I belong up here with all of the great fighters,” said Barrios, of San Antonio, Texas, who is trained by Virgil Hunter.

“We knew going into this fight he was going to be on his bicycle. Especially if I started to hurt him, which I believe I did several times. There were some adjustments I should have made better. Overall I felt stronger. There was nothing in there that really hurt me to where I couldn’t continue. I didn’t come out of here with the win, but I think I still gave the fans a great fight.”

Barrios had his best moment in the eighth round, where he backed up Thurman with a left hook to the body. But Thurman adjusted, ending with a fight-high 70 punches thrown in the final round on the way to winning, 118–110 on the cards of Tim Cheatham and Dave Moretti, and 117–111 on that of Steve Weisfeld.

“This was a comeback fight after two-and-a-half years away. I really grade this one a C-plus, B-minus for myself. But I knew that I was sharp from the sparring,” said Thurman, whose run of eight defenses (three knockouts) ended against the since-retired Pacquiao.

“[Barrios] was very poised. I showed him some movement. I saw some fundamental mistakes. He was crossing his feet over. So I was like, ‘Okay, I can treat this boy like some of my sparring partners and I can just school him a little bit. Get back on that jab more with him and land the better power shots like I did all night.’”

Pacquiao retired after losing his crown in August to Yordenis Ugas (27–4, 12 KOs), who is a future target for Thurman along with unbeaten southpaw counterparts Errol Spence (27–0, 21 KOs) of the IBF and WBC and Terence Crawford (38–0, 29 KOs) of the WBO.

“I want the belts, baby, I want the champions. I wanna be back on top, so whoever’s willing to send Keith Thurman a contract, let’s go, baby. Let’s go,” Thurman said.

“I’ve just got to get back into the gym and keep grinding and push that high intensity and high endurance. That’s what I’m missing right now. I’ve got the stamina, I’ve got the timing. I’ve just gotta go a little harder, and we’re prepared to do that a little later this year.”

Also a winner of third- and seventh-round stoppages of former champions Julio Diaz (April 2014) and Luis Collazo (July 2015), Thurman was forced to vacate the WBC title due to inactivity.

Before facing Pacquiao, he ended an injury-caused 22-month ring absence in January 2019 with a majority decision over third-time title challenger Josesito Lopez.

“This felt good. I still felt a little ring rust in there. But it was amazing. He was a great opponent. [Barrios] had more poise. He learned from his last outing,” Thurman said.

“I learned from my last outing. I was happy to be back in the ring. I look forward to having a better year later this year. In 2022, baby, One-Time is back.”

Claressa Shields vowed to make WBO counterpart Savannah Marshall “realize that her barking up the Claressa Shields tree was the wrong tree to bark up” before Saturday’s domination of Slovenian southpaw Ema Kozin in defense of her IBF/WBA/WBC middleweight titles.

With her one-time conqueror “The Silent Assassin” sitting ringside at the Motorpoint Arena in Cardiff, Wales, “T-Rex” Shields (12–0, 2 KOs) won every minute of a 10-round shutout unanimous decision (100–90 three times) against Kozin (21–1–1, 11 KOs) before engaging in a heated confrontation with Marshall (11–0, 9 KOs) during a post-fight interview.

Shields, 26, suffered her lone loss to the 30-year-old Marshall, being handled by “The Silent Assassin” in the 26th bout of an overall 77–1 amateur career.

But in victory over Kozin, Shields likely set up a winner-take-all unification with Marshall if the English woman successfully defends her crown against Femke Hermans (12–3, 5 KOs) on March 12.

But Marshall’s still believes her bite is worse than her bark after witnessing Shields’ effort against Kozin.

“I think if you perform like that against me, I’ll absolutely wipe the floor with you,” Marshall said during a ringside interview featuring both fighters when asked what she thought of Shields’ performance.

A still-perspiring Shields removed her three title belts from her lap, setting them aside before stepping forward and establishing a face-to-face posture with Marshall.

“Oh, beautiful, but guess what? You couldn’t wipe my drawers,” said Shields, whom Marshall called “pillow fists,” promising, “I’ll stop you” between the American’s taunts.

Arguably the most accomplished boxer in history, male or female, as well as the Greatest Woman Of All Time (GWOAT), Shields is the only American amateur boxer to earn back-to-back gold medals at the Olympic Games, doing so in 2012 in London and 2016 in Rio de Janeiro.

“I hope that Marshall does her job, because if that’s what they’re saying is the biggest women’s fight because she’s got some power and a little bit of height, and she can do what she’s gonna do, I’m gonna show them that Flint Town’s gonna put on the beat-down wherever. She’s gonna get it just like Ema Kozin got it — even worse, because I don’t like her.”

Shields expressed satisfaction with returning to the country where she was crowned an Olympic gold medalist a decade earlier.

“It was a 10-round shutout. I did everything I could to get Ema Kozin out of there, but when you have an opponent who has four to five months to get ready for you and she’s conditioned, she’s trained, I was still able to go out there and win every round,” said Shields, an amateur world championships’ winner in 2014 and 2016.

“Break her down with body shots, and I thought in rounds 5, 6 or 7, I thought she was about to either give up, or her coach was going to throw in the towel or the ref was about to stop it. She got checked by the doctors twice. I can only do my job. My job is to go out there, win the rounds, and hurt her. I hurt her a lot. I was happy with my performance.”

Marshall’s last victory in October was a second-round TKO of Lolita Muzeya, who entered at 16–0 (8 KOs) but who weighed 148 ¼ pounds for her previous bout in January 2021.

“I haven’t been impressed with any of Savannah Marshall’s fights,” Shields said. “She fights 147-pounders and knocks them out. When you’re actually fighting at the top, these girls don’t just lay down.”