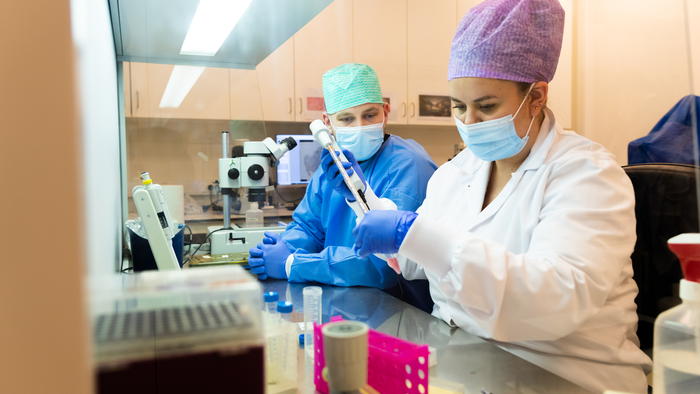 The Biology of the Testis lab at Vriej University in Belgium is conducting research on the feasibility of reimplanting testicular tissue in men unable to produce sperm after surviving treatment for cancer. (Vriej University, Belgium)

Researchers in Belgium are attempting to reimplant testicles in men who lost their fertility during childhood cancer treatment.

Ellen Goossens of Vrije University in Brussels (VBU) and her Biology of the Testis group have dedicated themselves to researching the loss of male fertility following cancer treatment. They are now the first group to have received the green light from an ethics committee to reimplant previously frozen testicular tissue in male cancer survivors. If successful, sperm cells will develop normally, restoring fertility to these patients.

Goossens said support from the Research Foundation – Flanders and the Kom op tegen Kanker (Stand up against Cancer) charity allowed the group “to develop a protocol for the preservation and transplantation of testicular tissue.”

Since 2002, 128 boys have had their testicular tissue banked

“A study is currently underway in which boys who have had tissue banked are further followed up [with] so that we can investigate whether their puberty is proceeding normally and whether they [will be] fertile in adulthood. This is important because too little is still known about the effects of cancer treatments at a young age.”

The team plans to complete its first transplant this year.

Commenting on the region’s investment in science, Flemish Minister of Science Policy Hilde Crevits praised the “ground-breaking cancer research by Flemish scientists.” She said that in concert with the cancer charity, her government is focusing “on better screening for skin and lung cancer and the effect of immunotherapy. We hope that these studies will also yield ground-breaking results in the future.” As part of that effort, Crevits has made an additional investment of $916,000 in cancer research.

Other research in Belgium is being conducted at the Catholic University of Leuven, Ghent University and Antwerp University. Researchers at these institutions are jointly probing how CT scans can be optimized to better screen patients for deadly lung cancer. Screening has already been shown to reduce the probability of death in men by 26 percent and by 41 percent in women, according to VBU. At the Catholic University of Leuven, research on immunotherapy is underway to determine why some patients respond better to immunotherapy than others.

Various forms of cancer therapy can be detrimental to testicular tissue at any stage of life, according to a 2014 paper appearing in the journal Translational Andrology and Urology. Cells that produce testosterone and sperm can be permanently damaged by the treatment. Cryopreservation of testicular tissue and/or semen are options for men to become fathers after cancer treatment. However, cryopreservation of semen from boys is not currently possible.

In 2019, a primate was born for the first time from sperm produced from testicular tissue that had been grafted onto an adult primate. Published in the journal Science, the resulting breakthrough is believed to be another step toward allowing men made infertile by cancer therapy before puberty to father children in adulthood.