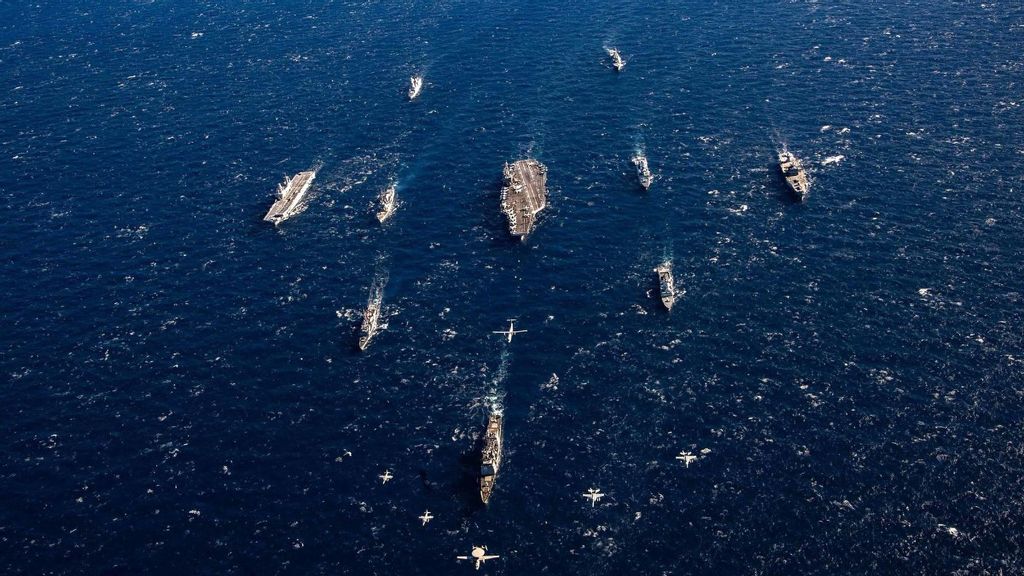 NATO warships sailing in the Mediterranean are being shadowed by Russian forces as the prospect of Russia invading Ukraine looms.

The footage, which was shared online by the U.S. Navy, was shot from a helicopter. It shows military vessels from NATO in formation in the Mediterranean, with fighter planes visible in the skies above them, also in formation.

The exercise was a tribute to the Neptune Strike 2022 exercises that end Feb. 5. NATO officials said it was a “vigilance activity” that “reflects routine deterrence activities aimed at ensuring peace and stability.”

All the military maneuvers come as Russia has amassed more than 100,000 troops along its border with Ukraine and NATO nations have sent warships, other military vessels and personnel to the region.

The United States has said Moscow was planning to fabricate an attack by Ukrainian forces in a false-flag operation designed to green-light its invasion of the country. Moscow has denied the allegations.

Putin has accused U.S. President Joseph R. Biden Jr. of escalating the situation by announcing that he planned to send 3,000 troops into Eastern Europe to support NATO allies. The first of those troops have arrived in Germany, the U.S. military’s European Command said.

“Obviously, these are not the steps that are aimed at deescalating tensions, but, on the contrary, these are actions that lead to an increase in this tension,” Kremlin spokesman Dmitry Peskov said of the U.S. troop deployment.

As for the naval activity, Lt. Cmdr. Karl Schonberg of the U.S. 6th Fleet said American vessels were regularly shadowed by Russian forces in the Mediterranean due to the constrained waterways in the Black Sea, the Mediterranean Sea and the Adriatic.

The exercises were geared toward “overcoming the complexities of integrating command and control of a carrier strike group to NATO,” the alliance said in a statement.

NATO said that the exercises were an “opportunity for NATO allies and partners to train together to refine tactics, techniques and procedures increasing interoperability and capacity across the maritime domain.”