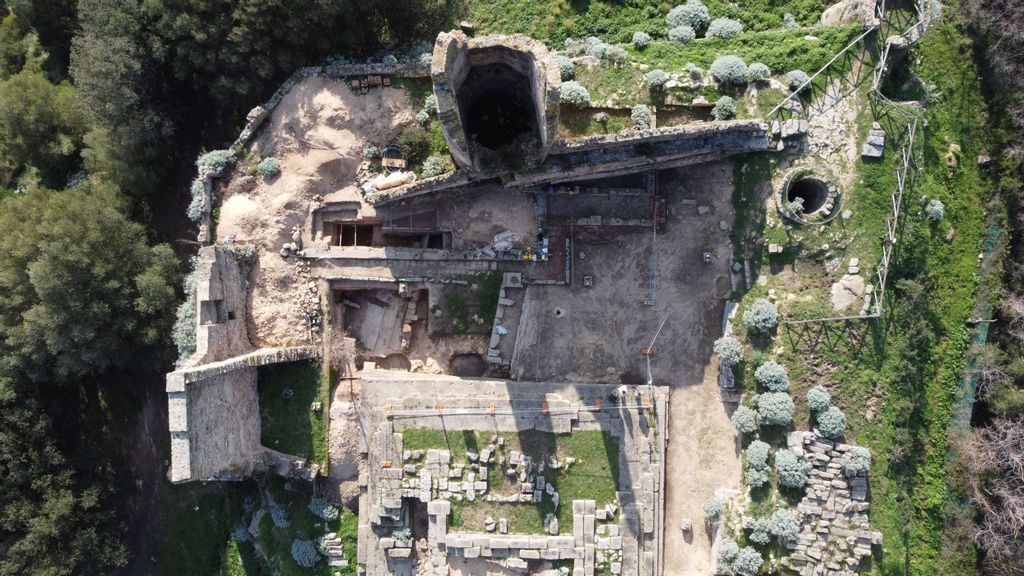 The remains of an archaic temple presumably dedicated to the goddess Athena, at the acropolis at the Elea-Velia archeological site in the province of Salerno in southern Italy. (Italian Ministry of Culture/Zenger)

Experts in southern Italy say they have discovered a site that seems to have served as an early forerunner to the Temple of Athena at nearby Paestum, dedicated to the Greek goddess of wisdom and war.

The ancient temple, unearthed at the acropolis at the Elea-Velia archeological site in the province of Salerno in southern Italy, is believed to date to 540 B.C. It contained painted ceramics, helmets, weapons and armor.

The treasures discovered inside the temple are believed to have been offered to Athena after the Battle of Alalia, which took place between 540 and 535 B.C. off the coast of Corsica. The battle was fought between the Greeks and the Carthaginians, who had formed an alliance with the Etruscans.

“It is important to continue investing with conviction in archeological research, which never ceases to return important pieces of the history of the Mediterranean,” Italian Minister of Culture Dario Franceschini said in a statement.

The Ministry of Culture said in the statement that archeologists working at the Archeological Park of Paestum and Velia, a UNESCO World Heritage Site, recently finished an excavation the unearthed a room that was rectangular and measured at least 59 feet long by 23 feet wide.

Inside, they said they found painted ceramics, vases and “numerous metal fragments pertaining to weapons and armor, including two helmets, one Chalcidian and another of the Negau type, in excellent condition.”

A number of items reportedly bore the inscription “IRE,” meaning “sacred.” The experts said the results of this research “shed light on the oldest and most incomplete phases of life of the city, founded around 540 B.C. by Phocaean settlers from Asia Minor.”

Phocaea was an ancient Greek city on the western coast of Anatolia. Colonists founded the city of Massalia, which is in France and known as Marseille today, as well as Emporion, which is known as Empuries in modern Catalonia, as well as Elea, in 575 B.C. in what is now Velia, in Italy.

“The archeological finds at the Acropolis of Elea-Velia suggest a sacred purpose for the structure,” said Massimo Osanna, Italy’s director-general of the museums and director of the Archeological Park of Paestum and Velia.

“In all probability, the relics offered to the goddess Athena after the battle of Alalia, the naval battle that saw the Greek refugees of Phocaea and a coalition of Carthaginians and Etruscans, between 541 and 535 B.C. approximately, off the Tyrrhenian Sea, between Corsica and Sardinia, were preserved in this environment.”

The temple uncovered at Elea-Velia predates the main Temple of Athena in Paestum, about 25 miles from Velia. Paestum was a thriving ancient Greek city, and its Greek ruins continue to attract visitors today.

The Ministry of Culture’s statement said the helmets still have to be cleaned in the laboratory and studied.

“Inside them, there could be inscriptions, which is quite frequent in ancient armor, and these could help to accurately reconstruct their history, who knows, maybe even the identity of the warriors who wore them,” the statement said.

The experts are now planning further investigations at the acropolis in a bid to reconstruct and find out more about the ancient Greek colony’s history.