VIDEO: Blind Cat Wakes Up Owner With Faintest Of Meows Every Day At 3 AM

Caring for a beloved pet “can teach you a lot about being selfless,” says the happy owner.
By Arian Movileanu February 3, 2022
Facebook
Twitter
Linkedin
Email 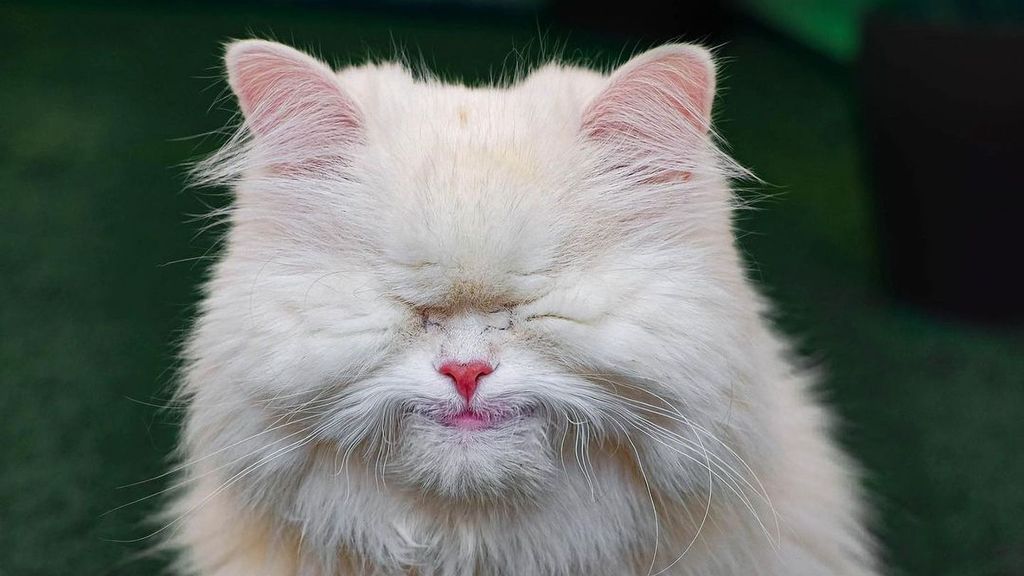 Social-media sensation Moet turned eight on Feb. 1. She lives with her British owner, Emily Shotter, in Oman, where she ws recently joined by another blind cat. (@moetblindcat/Zenger)

A cute, blind cat wakes up its owner with the faintest of meows at around 3 a.m. every day.

A video of the cat’s wake-up call, viewed 14 million times, was shared on TikTok by owner Emily Shotter from Nottingham, England, who runs the account Moet the Blind Cat. Shotter currently lives in Oman, where she works for a telecoms company.

Moet, who turned eight on Feb. 1, also has her own Instagram page.

“Moet and I love to have brush time together — it’s one of her favorite things, and she almost begs to be brushed,” Shotter said in an interview. “I only have to tap the brush, and she comes running, then lies there for ages while I brush her. We also have interactive playtime. But when I’m working at home, she curls up next to me. Or, she curls up against my legs in bed. She is so sweet and lovable.”

Shotter doesn’t have children, and says she views her cats has her “babies.”

“Animals can teach us a lot about unconditional love, about caring for a being that cannot care for itself,” she said. “It can teach you a lot about being selfless and also, they provide wonderful calming companionship.”

She also says she is “wary” of people who don’t love animals.

“I feel it tells you a lot about somebody’s character. It’s such a big part of my life, that I naturally associate and have an affinity to those who also love animals. That’s not to say all of my friends are huge animal lovers, but most ‘like’ them, even if they don’t have pets themselves.”

As for taking care of a special-needs cat, Shotter says caring for a blind cat is “easier than people might think.”

“Blind cats can get around like a normal cat. (They make mental maps of their surroundings.) They run, jump, play, climb and love to sit and ‘sense’ things even without eyes,” she said.

“Moet loves to sit in my enclosed garden and listen to the birds. The only thing to be mindful of are things that could cause danger. I have, for example, fully enclosed my stairs, so she can’t fall through the banisters. I also make sure I don’t leave anything dangerous lying around, and I don’t move furniture because she has learned where things are. That said, if I get a new piece of furniture or a cat tree, she soon learns to navigate it, but I ‘show’ it to her first.”

And a day in Moet’s life starts early.

“Moet wakes me up any time between 3 and 4.30 a.m. I usually try to wait until 4.30 to get up and then meet her breakfast demands and have a quick brush … She always comes and paws at my laptop to let me know she’s hungry for lunch.

“After that, it’s more playtime, perhaps some time in the garden and another nap until teatime. I feed her four small meals a day because she has a small tummy and doesn’t eat much in one go.”

“She’s definitely most active in the evening; demanding playtime, activity and outside time. If she doesn’t get her way, she’ll squeak and pester me until she does! When I go to bed, she usually plays by herself for a little while before either settling down to sleep in one of the cat trees or on my bed.”

As for Moet’s internet stardom, Shotter says it’s for a good cause.

“Moet has her own website, where people can find out more about her and read her rescue story. She also has an online store and donates 100 percent of profits from sales to needy animals in Oman.

“I’m part of a volunteer group called Omani Paws. It’s just a group of animal lovers who try to help as many animals as we can. There is no animal-welfare legislation in Oman, no government funding/support and there are no shelters. So, any rescue work relies solely on donations and the generosity of the public.

Emily recently adopted another blind cat from Santa Rosa, California. She says “she looks just like Moet and her name is Chandon, Chandie for short.”