“I don’t think this fight is going to go 12 rounds. If I see an opening, I’m going for the kill,” Barrios says 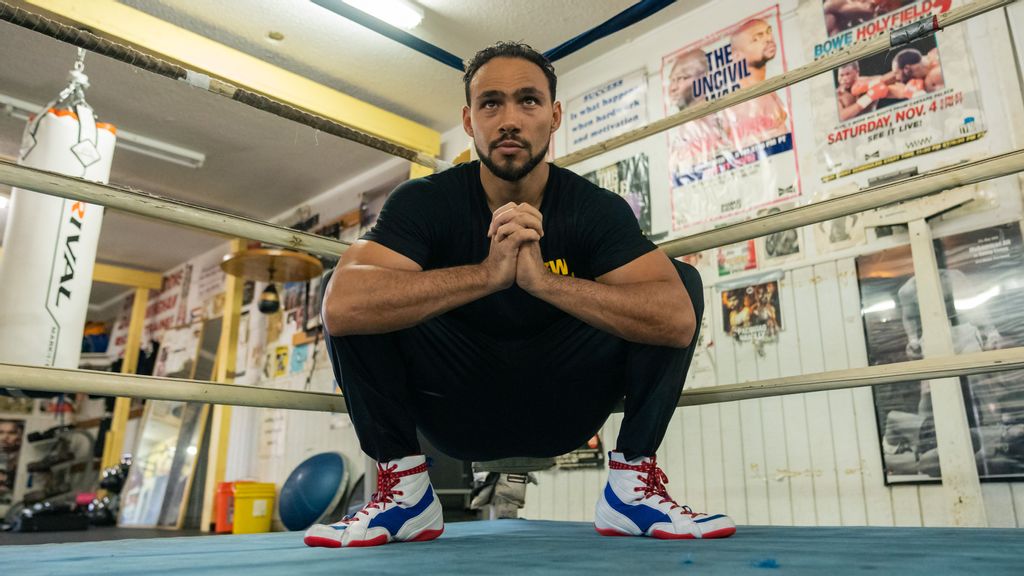 Former champions Keith Thurman and Mario Barrios are skilled, heavy-handed fighters aiming to knock one another senseless during their Feb. 5. 147-pound clash at Michelob Ultra Arena in Las Vegas.

Not only did each man hit the deck while losing for the first time in his last fight, but each says his weight was a factor against shorter southpaw titleholders who stood 5-foot-5 &half;.

“Keith Thurman and Mario Barrios will be looking to do whatever they can to get a big win in this fight,’’ said Tom Brown, president of TGB Promotions.

Thurman was dethroned as WBA 147-pound champion in July 2019 in a one-knockdown, split-decision loss to eight-division title winner Manny Pacquiao, who later retired after losing that crown in August by unanimous decision to Yordenis Ugas.

“I’m not less than after my loss. I’ll show greater skills to the fans in fighting Mario Barrios than I did against Manny Pacquaio,” Thurman said. “This training camp we started strength training earlier. We wanted to establish power early in the camp.”

“Our Pacquiao camp was really strict from the beginning as I had a big demand on my body to pull off 35 pounds before the fight,” Thurman, who is trained in his native Clearwater, Florida, by Dan Birmingham, added.  “For this camp, we started at a 25-pound marker, and the pull and taxation on my body have been gentler. At age 33, I’m young, willing and able, and it’s time to get back.”

Barrios (26–1, 17 KOs) rises in weight class after losing his WBA 140-pound title via 11th-round TKO to left-handed three-division title winner Gervonta “Tank” Davis (26–0, 24 KOs) in June. Davis floored Barrios twice in the eighth and once in the eleventh round in the fight.

“I thought I was boxing well from the outside against Gervonta until I got caught with a punch I didn’t see coming,” Barrios said. “Thurman only lost to the great Manny Pacquiao, so he’s seen it all. He’s a great, explosive fighter, who is much taller than Tank by a few inches.”

“Sparring has been going great. I’ve been working on my defense with some tough guys who have been pushing me. I’m going to be both boxing and throwing hard shots, trying to exploit Thurman’s vulnerabilities,” Barrios said. “I don’t think this fight is going to go 12 rounds.  If I see an opening, I’m going for the kill.”

From February 2016 through March 2018, Thurman’s career stalled from injuries to his neck and back, right elbow and left hand, limiting “One Time,” as he is known for his knockout punch, to the wins over Porter and Garcia.

Thurman wants to reestablish himself in a division whose champions are unbeaten southpaws Errol Spence (IBF/WBC) and Terence Crawford (WBO) as well as the WBA’s Ugas.

“I want my world titles back. Mario wants to come in and solidify himself as a name to be recognized in the 147 division should he surpass Keith Thurman,” said Thurman, who was forced to vacate the WBC title due to inactivity. &ZeroWidthSpace;“I see the welterweight division as a horse race. Everybody is running full speed trying to get to the finish line, and the finish line is where you are crowned king of the division.”

Thurman spent some time afterward vacationing in Japan with his wife, Priyana, who gave birth to their daughter, Ananda, in April.

“For my comeback, Mario Barrios had the best record out of the small handful of fighters presented to me. This is the first step to putting myself back in championship contention,” said Thurman, also a winner of third- and seventh-round stoppages of former champions Julio Diaz (April 2014) and Luis Collazo (July 2015).

Barrios “had an exciting performance against ‘Tank’ Davis. We’re two fighters who are talented, exciting and coming off their first career losses,” Thurman said. “It just seemed like it’d be a great challenge for both of us. With the right speed, determination and momentum, I have the skills to once again rise to the top and reclaim my number one spot in the welterweight division. It’s my time to rise. One time. It’s go time.”

A drained and weakened Barrios made 130-pounds for the last time in July 2016 against former European champion Devis Boschiero, earning a final-round knockdown during a shutout unanimous decision (120–107 three times).

Barrios then rose into the 140-pound division for his next 10 bouts, a move that led to him going undefeated with eight straight knockouts all under 2013 BWAA Trainer of the Year Virgil Hunter.

“My fight [at 130 against Devis Boschiero] was very difficult. In the later rounds, I didn’t have the power in my legs. That convinced me that I couldn’t fight at 130 anymore,” Barrios said. “When I first moved up to 140, it was a major blessing because it was killing me to make 130 pounds. That’s why I skipped 135 and went straight to super lightweight.”

“All those KO’s came because I was a lot stronger initially at 140 and was able to make 140 fairly easy. But that has changed. I’ve outgrown that weight class. I’m not one to make any excuses. Tank is a great fighter, but I walk around at about 160 pounds. Any deficiency in the ring was due to the struggle of making weight,” said Barrios of his final 140-pound battle with Davis.

“Since making the move to welterweight, I’ve stayed in shape since my last fight with Virgil Hunter, and the extra seven pounds has made a tremendous difference. My sparring has gotten me into perfect condition. I know what needs to be done. I believe I can execute the game plan we have in place. I’m still big for this weight as well. In this fight, we’re going to see if my power comes up with me. I’m confident that it will.”