A police car was destroyed while responding to a call about a vehicle deliberately driving at people.
By Joseph Golder February 1, 2022
Facebook
Twitter
Linkedin
Email 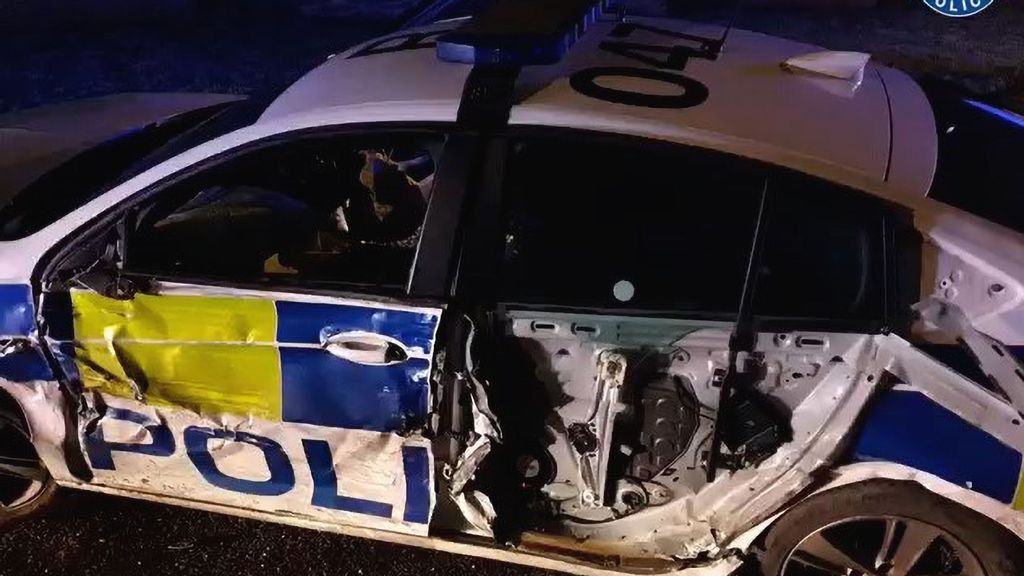 A van driver who was high on drugs and dressed only in his boxer shorts when he rammed a police car in Coventry, England, six times on Jan. 1, 2021, has been convicted.

Paul Neelan was found guilty of two counts of attempting to inflict grievous bodily harm on police officers on Jan. 27, 2022, at the Leamington Crown Court in Leamington Spa, England.

Police said Neelan will be sentenced on March 4.

West Midlands Police said the incident took place on Hancock Green in the city of Coventry. It left a police vehicle, a Vauxhall Insignia, with a repair bill “topping GBP 15,000” [$20,000], meaning the car “was written off.”

The footage, apparently filmed from the body-worn camera of the officer driving the police vehicle, shows the car being hit by a white transit van.

The police respond by chasing the vehicle, which crashes off the side of the road in a suburban neighborhood into what appears to be a low wall surrounding a residential property.

An officer can be heard shouting he has a taser, ordering the suspect to “stay on the floor.”

The suspect, who is only wearing underwear, despite the cold weather, is then handcuffed by the police and arrested.

The West Midlands Police said: “Two officers were helped from the car having suffered neck and back injuries, but thankfully neither were seriously injured.”

The police explained the officers had headed to the area after reports of a person deliberately driving a van at pedestrians when Neelan hit them with the large, white vehicle.

The police said: “They were heading to Hummingbird Avenue, Coventry, at 1:45 a.m. on 1st January 2021, when they spotted a white transit van being driven recklessly and mounting a pavement. There had earlier been reports of a serious disorder and a vehicle deliberately driving at people.

“We pursued Neelan into Hancock Green, but he suddenly put the van into reverse and careered backwards into the officers.”

The police said the car was rammed six times and the impact triggered the car’s airbags and tore off a door, before Neelan hit another police car.

The police said the man behind the wheel of the van was high on drugs and that he tried to flee the police, but crashed after failing to handle a roundabout, a circular area where three or more roads join.

“Neelan, from Cedars Avenue in Coventry, was chased down and found hiding in a garden nearby wearing only a pair of boxer shorts,” police said.

Investigating officer Detective Constable Bally Kaur said: “This was a shocking attack on two officers who were heading to the scene of a disorder to protect members of the public.

“One of the officers had to be carried off on a spinal board, but thankfully they turned out not to be seriously injured.

“Neelan could easily have injured more people and caused a serious crash as he sped away high on drugs. Anyone who assaults emergency-service workers must expect to pay a high price and spend time behind bars.”

«Previous Post
VIDEO: Teen Convicted Of Murder After Stabbing Ex-Girlfriend’s Father To Death»Next Post
For Fox Sake! Impressionist Painting Saved From Nazis To Be Sold At Auction For $47 Million