The ancient Maya liked chocolate a lot, and traded cacao beans throughout Mesoamerica. 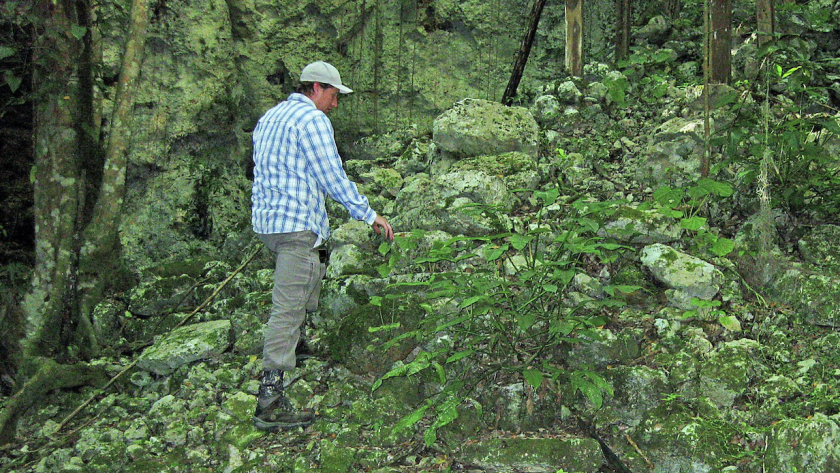 Researcher Chris Balzotti climbs stairs at a Yucatan sinkhole that once provided a microclimate for the ancient Maya to cultivate cacao trees in an otherwise hostile environment. (Richard Terry)

The next time you satisfy a craving by drinking hot cocoa or eating a chocolate bar, spare a thought for the ancient Maya who cultivated the cacao tree, believing it to be a gift from the gods.

Cacao, or cocoa beans, are the fruit of the Theobroma cacao, meaning “food of the gods.” The tree was first cultivated in the rainforests of Central America, especially in the Peten region of Guatemala and in central Yucatán, Mexico. The beans, which are actually seeds nestled inside large yellow pods, were even used as currency by the Maya.

Carefully cultivated by the Maya of northern Yucatán, where Europeans first made contact with Mexicans, cacao was carefully controlled in sacred groves. Some of these groves were recently discovered by Brigham Young University researchers Richard Terry, Bryce Brown and Christopher Balzotti, who published a study on their findings in the Journal of Archaeological Science Reports. Researchers from California and Mexico also contributed.

Cacao trees require very specific conditions for optimal growth. These include having sufficient shade, humidity and a calm environment. Northern Yucatán, which is a peninsula that projects into the Gulf of Mexico, is relatively drier than Central America. Moreover, because it is a raised ancient seabed made of limestone, little standing water remains on the surface during the dry season, which extends from November to May. The water-soluble nature of limestone created the region’s characteristic sinkholes, known as cenotes, as well as its underground caverns and rivers.

The drier climate of Yucatán does not favor cacao trees, but its sinkholes offer microclimates that are just right for growing them. The research team found that nine of the eleven sinkholes they examined showed signs of cacao biomarkers: caffeine and theobromine. The sinkholes also revealed other evidence of human intervention, including stone carvings, altars, staircases and ramps for processions, as well as sacrificial offerings such as jade and tiny ceramic copies of cacao pods.

“We looked for theobromine for several years and found cacao in some places we didn’t expect,” said Terry, who recently retired from BYU. “We were also amazed to see the ceremonial artifacts. My students rappelled into one of these sinkholes and said, ‘Wow! There is a structure in here!’ It was a staircase that filled one-third of the sinkhole with stone.”

In order to analyze the sinkhole’s soil for biomarkers, the researchers developed a new soil extraction method. They dried soil samples and passed them through a sieve, before covering them with hot water. The samples were then centrifuged and passed through extraction disks, and the extracts were analyzed using mass spectrometry. In spectrometry, samples are bombarded and ionized by a stream of electrons, which reveals their atomic composition.

For increased accuracy, the researchers compared these soil samples to seven control samples that had been exposed to the relevant biomarkers.

According to the scientists, the productive cacao groves were important in Maya ritual and economy. Cacao was shared across Mesoamerica (Central America and half of Mexico) and played an important role throughout the region.

“Now we have these links between religious structures and the religious crops grown in these sinkholes,” Terry said. He noted that because the beans were equivalent to currency, the “sinkholes were a place where the money could be grown and controlled. This new understanding creates a rich historical narrative of a highly charged Maya landscape with economic, political and spiritual value.”

The researchers looked at a sinkhole located about 45 minutes from Tulum, a Maya site notable for its ancient celestial observatory, which draws thousands of tourists annually. Found near the village of Coba, the Dzadz lon sinkhole yielded an arm and the bracelet of a figurine attached to an incense jar, as well as several ceramic representations of cacao pods.

At the site, they also found remnant cacao trees growing, leading them to believe that a sacred cacao grove was cultivated there during the Late Post-classic period (about A.D. 1000 to 1400).

The first European known to have reached Yucatán was Spanish explorer Francisco Hernández de Córdoba, who came with 100 soldiers and sailors in 1517. The local people resisted and killed 50 Spaniards and captured others, prompting the governor of Cuba, Diego Velásquez, to send conquistador Hernán Cortés in 1519. Cortés and native allies eventually defeated the Aztec empire at what is now Mexico City.

In his eyewitness account of the conquest of Mexico, Bernal Díaz del Castillo described a dinner officiated for the conquistadores by Aztec emperor Moctezuma, which featured golden cups filled with a frothy chocolate brew. It was a son of Christopher Columbus who, on one of the voyager’s later trips to the Americas, described the Maya people’s use of cacao beans as currency.