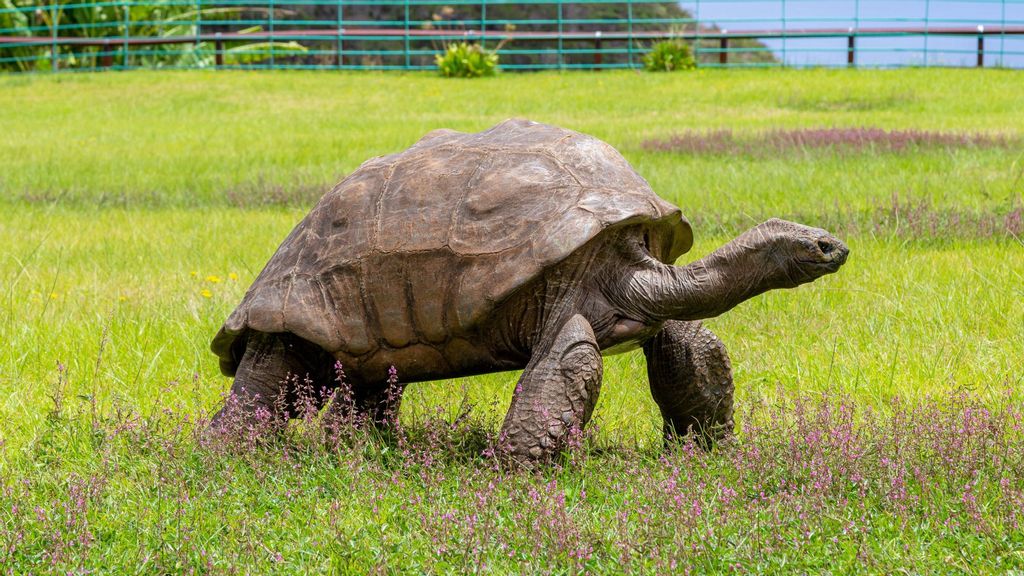 Jonathan, a giant tortoise turning 190 years of age in 2022, is seen on the remote island of Saint Helena, a British territory. (Mathias Falcone/Zenger)

Jonathan, considered to be the oldest living land animal, will have a record-setting birthday this year. Experts believe he will turn 190, making him the oldest tortoise ever known. Guinness World Records has certified Jonathan as the most elderly chelonian, an order of reptiles uniting all turtles.

Jonathan lives on Saint Helena Island, a British territory in the South Atlantic Ocean 1,210 miles off the coast of southwestern Africa.

Researchers say Jonathan was born in the Seychelles, an island country and former British colony in the Indian Ocean and taken by ship to Saint Helena in 1882, at which point he was already fully grown, and therefore at least 50 years old. Jonathan was a gift to Saint Helena from British colonial administrator Sir William Grey-Wilson, who would go on to govern the island from 1887 to 1897.

Jonathan has outlived the average lifespan of his species by many years. Age, however, has taken its toll in several ways. Jonathan is now mostly blind due to cataracts and no longer has a sense of smell. However, he has kept his appetite, and his favorite food is said to be lettuce.

Jonathan “grazes well now, but is unaware of food if we simply place it on the ground,” Guinness World Records says on its website, quoting Saint Helena’s government.

“The Veterinary Section is still feeding him by hand once a week to boost his calories, vitamins, minerals and trace elements, as he is blind and has no sense of smell,” the government says.

“His hearing though is excellent, and he loves the company of humans and responds well to his vet Joe Hollins’ voice as he associates him with a feast.”

Jonathan “enjoys the sun but on very hot days takes to the shade. On mild days, he will sunbathe — his long neck and legs stretched fully out of his shell to absorb heat and transfer it to his core,” Hollins said.

Jonathan has also maintained a strong libido, and he regularly mates with giant tortoises Emma and even sometimes with their fellow giant tortoise Fred.

In October 2019, the Saint Helena Post & Customer Services Center announced it would issue a Jonathan postage stamp. It depicted him and other tortoises on the grounds of Plantation House, the governor’s residence, which is their habitat on Saint Helena.

The Saint Helena Post & Customer Services Center said it was “fitting to commemorate [Jonathan’s] life and standing through a Christmas Stamp Issue.”

On Jonathan’s real age, Guinness World Records said: “In all likelihood, he is even older than we think.”