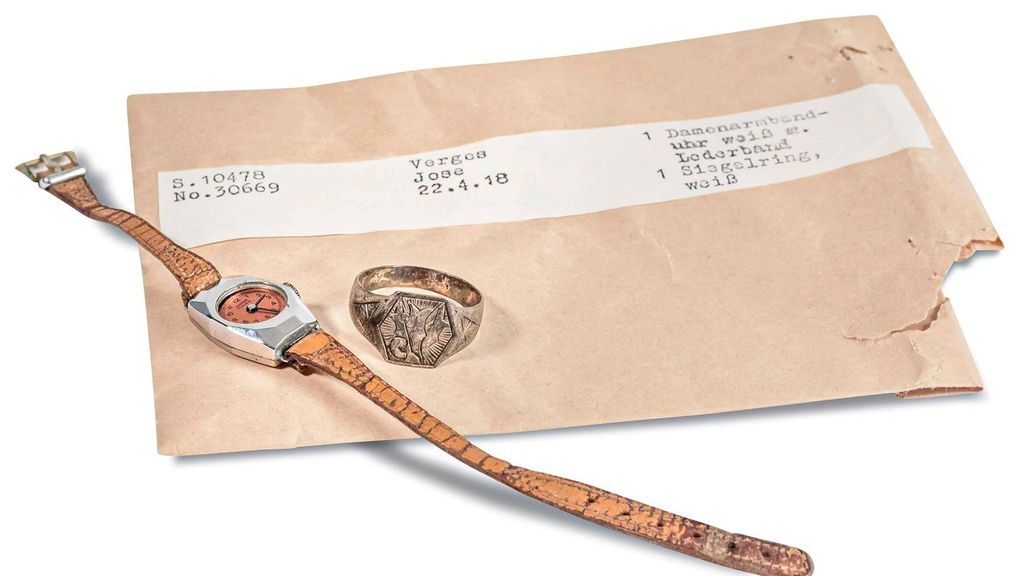 The watch and ring of Josep Verges, who worked for the French Resistance during World War II and died in the Neuengamme prison camp, were returned to his family. (Government of Catalonia)

A watch and a ring seized by the Nazis from a resistance fighter who died in a concentration camp in 1945 have been returned to his family.

The resistance fighter, Josep Verges, was deported to the Neuengamme concentration camp in Hamburg in northern Germany. He worked for the French Resistance and helped members cross the border between Spain and France, the Catalonia government in Spain said in a statement.

Vergas’ descendants’ were located at the end of 2020 thanks to an investigation into those deported from Girona to France. Verges’ possessions have been part of the Exile Memorial Museum (Museu Memorial de l’Exili) in the municipality of La Jonquera in Girona. The museum is dedicated to the history and memory of those who fled into exile due to the 1936–1939 civil war in Spain.

Verges’ watch and ring were part of the museum’s 2020 #StolenMemory traveling exhibition, which displayed the personal objects recovered from prisoners in various Nazi concentration camps.

Verges was born in 1918 in the municipality of Sales de Llierca in Girona.

Among his duties was collecting military intelligence from the Germans who were in the French Zone controlled by the Vichy government after the Nazis split the country in two. They then controlled the north while the south was put in the hands of French forces collaborating with the Germans.

In 1944, the Nazis arrested Verges and transferred him to the Royallieu-Compiegne prison before he was later taken to the Neuengamme concentration camp and assigned prisoner number 30,669.

According to the death certificate, Verges died in Neuengamme on March 1, 1945, from heart failure and a cold. But the testimony of another political deportee indicated he died on Feb. 28, 1945, completely consumed, in hut number 16. Verges was 27 years old when he died.

Verges’ grave in Salzgitter, Lower Saxony, Germany is in a cemetery that was created in 1943 to bury the thousands of men and women who died in the Neuengamme camp and its subfields.

Verges’ watch and ring had been kept in the Arolsen Archives, which preserves about 3,000 belongings and organizes exhibitions in various European cities. Also known as the International Center on Nazi Persecution, the Arolsen Archives provides documentation, information and research on Nazi persecution, forced labor and the Holocaust.

The Neuengamme concentration camp held more than 100,000 prisoners during World War II with a death toll estimated at over 42,000 people.

After the Nazis surrendered in 1945, the British Army used the concentration camp to detain high-ranking members of the SS (Schutzstaffel, or Protection Squads) and other top Nazi officials, according to the Neuengamme Memorial.