The endangered reptile — still in its shell — was sent through the mail.
By Georgina Jadikovskaall January 30, 2022
Facebook
Twitter
Linkedin
Email 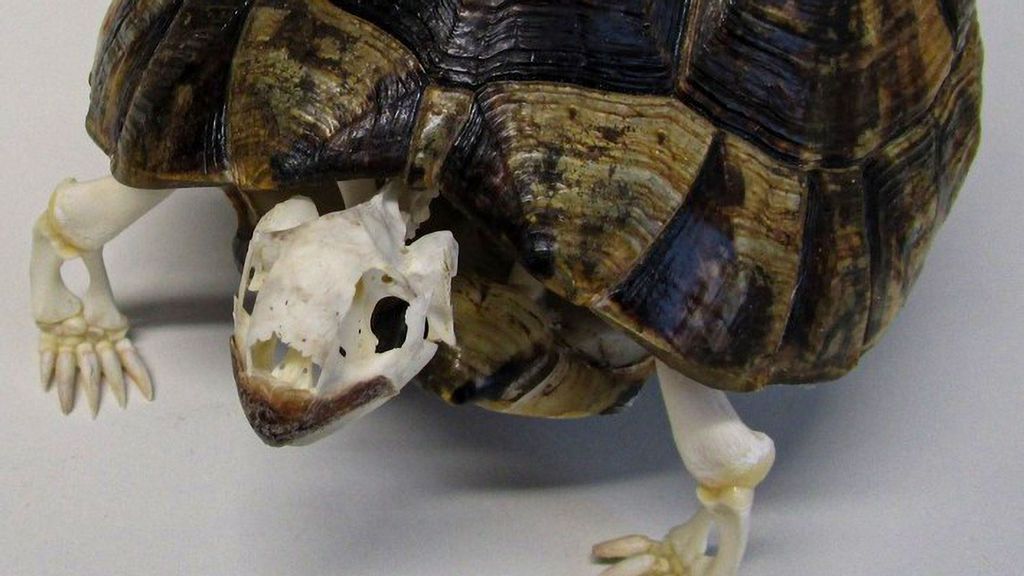 The tortoise skeleton and shell seen in this photo was found by customs officers in Donauwörth in Bavaria, Germany. (Main Customs Office Augsburg/Zenger)

German customs officers seized a protected tortoise skeleton this month along with its shell that was shipped from Switzerland to Germany to serve as a home decoration.

The Donauwörth Customs Office in Bavaria found the tortoise and its shell in a package on Jan. 19.

According to the police, the specimen is a Greek tortoise (Testudo graeca), also called a spur-thighed tortoise, which is listed as “vulnerable” on the International Union for Conservation of Nature’s Red List of Threatened Species.

Greek tortoises tend to live a long time, achieving a lifespan upwards of 125 years, with unverified reports mentioning some specimens reaching 200 years of age. They are native to North Africa, Southern Europe and Southwest Asia.

Testudo graeca is one of five species of Mediterranean tortoises, along with the Hermann’s tortoise, the Egyptian tortoise, the marginated tortoise and the Russian tortoise. Greek tortoises tend to be black, dark yellow, gold or brown.

According to research conducted by the University of Thessaloniki in Greece, the oldest known definitive Greek tortoise fossil originates from the Early Pliocene era (roughly 5 million to 3.5 million years ago).

It is believed that there are only a few tens of thousands of Greek tortoises remaining. They are seen frequently along the Mediterranean coast of Spain, in Southern Murcia and in Northern Almería.

The reduction and fragmentation of Greek tortoise habitat continue in part as a result of development on the Black Sea coast.

The Greek tortoise is strictly protected under the Convention on International Trade in Endangered Species of Wild Fauna and Flora (CITES).

“When importing endangered animals or plants into the European Union, a permit issued by the Federal Agency for Nature Conservation, a so-called CITES certificate, must be presented,” the main customs office in Augsburg said in a statement.

The package did not include the required paperwork, and therefore, the tortoise was confiscated by the Donauwoerth Customs officers.

The intended recipient of the package can submit the required CITES certificates within one month. It is unclear whether Swiss police are investigating the origin of the tortoise.