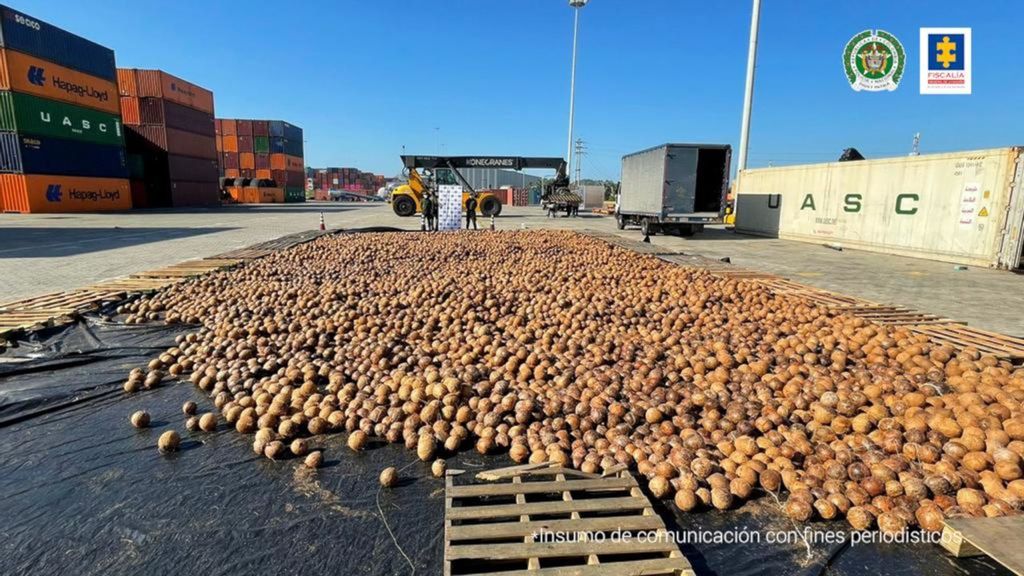 Police seized liquid cocaine located inside 19,780 coconuts in a container in the port of Cartagena, Colombia, headed for Genoa, Italy. (Colombian Prosecutor's Office/Zenger)

Colombian Police discovered more than 19,700 coconuts filled with liquid cocaine waiting to be shipped to Europe a few hours later.

The 504 canvas bags containing the fruit were seized in the port city of Cartagena, which looks out onto the Caribbean Sea in northern Colombia. The shipment was allegedly destined for Genoa in the northwestern Italian region of Liguria.

“Upon inspection, it was established that the water in the tropical fruit had been exchanged for liquid cocaine,” the Office of the Attorney General of Colombia said in a statement.

“The discovery was achieved thanks to the investigative actions carried out by the Prosecutor’s Office, through the Specialized Directorate against Drug Trafficking, and in a coordinated effort along with the Anti-Narcotics Directorate of the Colombian Police,” the statement said.

The attorney general’s office shared images of the bust on social media as the police had quickly determined that the water typically found inside coconuts had been replaced with liquid cocaine; 19,780 coconuts were sent to a laboratory to be analyzed to determine the exact amount of cocaine.

The Colombian authorities said they are in touch with their Italian counterparts in their investigations into the criminal network behind the cocaine smuggling ring.

Liquid cocaine is powder cocaine that has been dissolved in solvents that allow it to become liquid and to be later converted back to powder.

Dissolving cocaine into water has been a rather frequent method of trying to smuggle the drug. Swapping coconut water for liquid cocaine is certainly not a common way. But a shipment of coconuts was found at the Madrid airport in 2017 that had been injected with a total of 60 grams of liquid cocaine.

Juan Pablo Escobar, the son of Colombian drug lord Pablo Escobar, wrote in his 2014 book, “Pablo Escobar, My Father,” that his dad and the Medellín cartel members would soak shipments of denim in liquid cocaine. The denim would be then put in a special solution to extract it and the cocaine would be dried.

In November 2019, officials confiscated an estimated $400,000 worth of liquid cocaine inside two dozen shampoo bottles at George Bush Intercontinental Airport in Houston, Texas. A 26-year-old Colombian was detained for allegedly trying to smuggle 35 pounds of liquid cocaine in those bottles stashed among clothes in his checked luggage, according to a U.S. Customs and Border Protection press release.

“Our officers are the first line of defense at our ports of entry, so they are trained in the various smuggling methods people use to bring illicit goods into the U.S.,” the agency Port Director Shawn Polley said at the time. “We take every opportunity to intercept those illicit goods before they enter our communities, in this case it was 35 pounds of liquid cocaine.”

No arrests in connection with the Cartagena coconut shipment have been announced.

«Previous Post
VIDEO: BMW Driver Jailed For Smashing Into Volvo At Twice The Speed Limit»Next Post
Caiman Get Me Copper: Suspect Had ‘Gator Guard Dog When Police Raided His Home