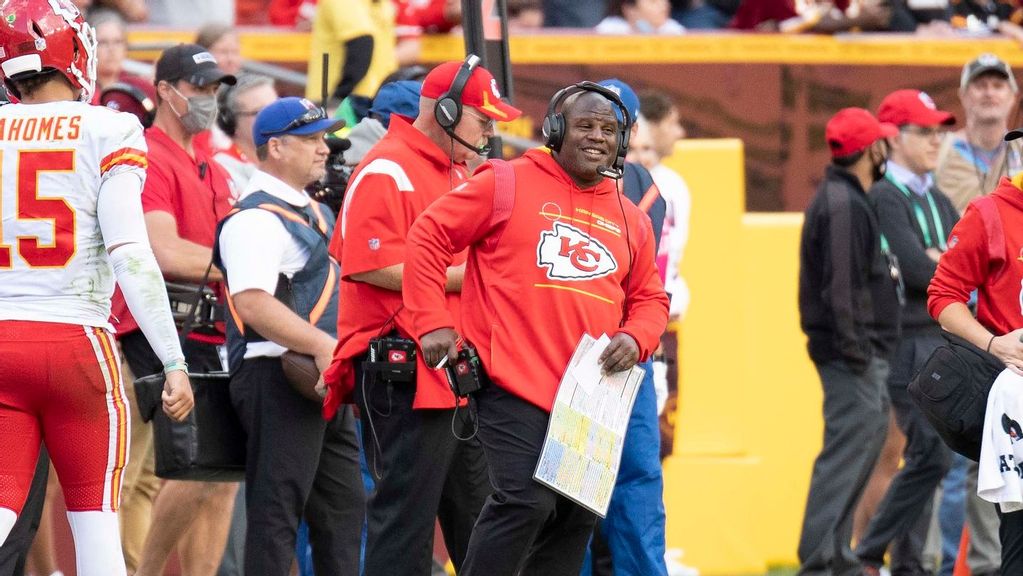 Eric Bieniemy, who is among the most highly regarded black assistant coaches in the NFL, could certainly land one of the vacant head-coaching spots, but his name isn’t among the early chatter. (All-Pro Reels/CC BY-SA 2.0)

As the coordinator of the high-octane Kansas City Chiefs offense, Eric Bieniemy has had plenty to do with their being one of the top teams in the National Football League the last four years. The run includes a Super Bowl championship in 2020 and last year’s loss to Tampa Bay for the league title.

Such success normally opens up a wealth of opportunities to become a head coach. But as the NFL starts to fill its current group of head-coaching vacancies, Bieniemy, who is black, is hardly mentioned.

Pittsburgh’s Mike Tomlin is the only current black head coach in the NFL after the Miami Dolphins fired Brian Flores after three seasons and Houston dismissed David Culley after one.

The first hires of this year’s coaching cycle were made when the Denver Broncos selected former Green Bay Packers offensive coordinator Nathaniel Hackett and the Chicago Bears hired Indianapolis Colts defensive coordinator Matt Eberflus to lead them. The New York Giants followed, hiring Buffalo Bills offensive coordinator Brian Daboll. All three new head coaches in a league in which nearly 70 percent of the players are black are white.

Bieniemy, who is among the most highly regarded black assistant coaches in the NFL, could certainly land one of those spots, but his name isn’t among the early chatter.

It remains a head-scratcher, especially in a copy-cat league such as the NFL. Kansas City’s success should breed imitators, but owners keep looking elsewhere.

The Giants took a leap of faith two years ago, diving deep down New England head coach Bill Belichick’s coaching tree to grab Joe Judge, who was fired not long after his second season in New York. Now the Packers offensive coordinator (Hackett) is a head coach after Green Bay was upset at home last week by the San Francisco 49ers, and the Colts defensive coordinator (Eberflus) is a head coach after Indianapolis suffered two losses to end its season short of the playoffs.

Through it all, Bieniemy keeps smiling, and there is plenty to smile about. The Kansas City Chiefs (14–5) are in the AFC Championship Game for the fourth straight year, scheduled to host the Cincinnati Bengals (12–7) on Sunday at GEHA Field at Arrowhead Stadium.

Bieniemy says he isn’t thinking about the head-coaching possibilities that exist and whether this is finally the year an owner will give him a chance to lead a team.

“I’m just glad to be a part of this organization and what we’ve done and what we’ve accomplished so far,” he told reporters during a virtual interview Jan. 27 in Kansas City.

What he and the Chief accomplished last week was winning one of the most exciting games in NFL history: Kansas City’s 42–36 overtime victory over the Buffalo Bills. The Chiefs forced overtime with a drive that began with only 13 seconds remaining. It took just three plays for them to get into position for the game-tying field goal.

Tight end Travis Kelce orchestrated the last two plays telling wide receiver Tyreek Hill where to go off his block on one play and for quarterback Pat Mahomes to look for him on a seam pattern on the other. Hill picked up 19 yards on the reception. Kelce’s catch went for 25. Harrison Butker drilled a 49-yard field goal to tie the game. Kelce caught the game-winning touchdown pass in overtime.

Bieniemy said there was never any panic. “We rehearse this stuff all the time,” he said.  “Every week we practice every possible scenario we could go through.”

Bieniemy called it “a great team victory” and “a historical event.” But that was last week.

While the newest NFL head coaches were announced on Thursday, Bieniemy’s focus was on preparing for the Bengals and trying to outscore Cincinnati quarterback Joe Burrow. The two teams met in Week 17, and the Bengals rallied from a 28–17 deficit to win, 34–31.

The Bengals outlasted the Las Vegas Raiders and beat the Pittsburgh Steelers to reach their first AFC Championship Game since they made it to the Super Bowl in 1988.

Mahomes completed 26 of 35 for 259 yards and two TDs in the first meeting against the Bengals. It was a clean game with no turnovers, though the Chiefs will have to find a way to play better to advance to Super Bowl LVI in Los Angeles.

“We’re trying to go out there and win the AFC Championship and get to the Super Bowl,” Mahomes said. “They’re a great football team trying to win a big football game. But I’m glad we’re at Arrowhead with a chance to use our crowd to our advantage.”

So is Bieniemy, which is why he’s still smiling.