Animal-loving police in Wales helped a deer in distress, careful to steer clear of its sharp antlers. 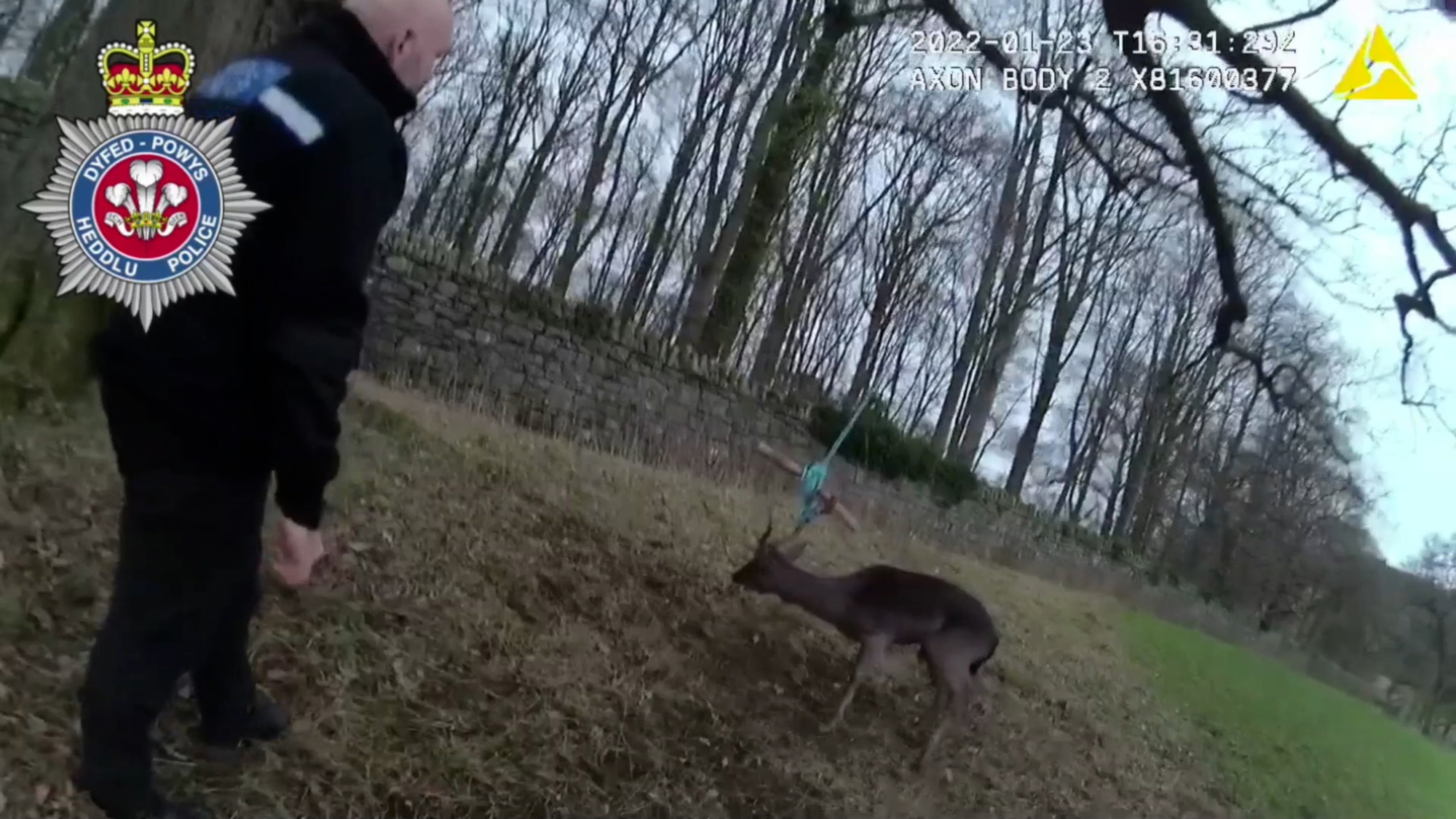 Police officers used a pair of scissors from their first aid kit to rescue a deer that was trapped in a rope swing in Wales in the United Kingdom. (Heddlu Dyfed-Powys Police/Zenger)

Welsh police officers rescued a terrified, semi-airborne deer after its antlers became tangled in a tree swing rope, using nothing but scissors.

The incident took place near the market town of Welshpool, located in Powys County, in Wales, U.K., on Jan. 23. Police officers had to proceed with caution; the sharp antlers could have caused them serious injury.

The police said the deer was so scared it tried to flee, but the rope held it back. It became airborne every time it tried to run.

The police said they received a call about a deer in distress, and despite having been relayed to the RSPCA (Royal Society for the Prevention of Cruelty to Animals), they decided to investigate.

Footage of the rescue was shared online by the Heddlu Dyfed-Powys Police, which said in a statement: “Two Dyfed-Powys Police officers literally went above and beyond the call of duty when they went to rescue of a deer tangled on a rope swing in Powys.”

The footage, filmed by a body-worn camera, shows the animal flailing and tangled in the swing. The police officers make calming sounds as they approach the terrified animal.

One of the police officers tries to grab the rope, but the deer launches off its hind legs and its antlers miss his face by inches. Eventually, the frightened animal tires and stops lunging.

A second officer then suggests using a pair of scissors to cut the rope. One cuts the rope as the other strokes the deer’s head to keep it calm.

PC Wilkinson said: “I saw the call come on the system and that it had been referred to the RSPCA. But as animal lovers, I suggested to Marcus that we go and see if we could help the animal and prevent any suffering it was going through.”

PC Wright said: “The poor thing was swinging by its antler and must have been exhausted and terrified. Fortunately, it calmed pretty quickly, which enabled us get to work … Within 15 minutes it was freed, but it sat there for a little while to catch its breath, and then it was off.

“As animal lovers, it was great to see, and a very rewarding experience for us both.”

The police reminded the public that while they were happy to help, citizens should call the RSPCA in such incidents.

There are 43 species of deer. The animals, which are most active near dawn and dusk, shed their antlers every year.