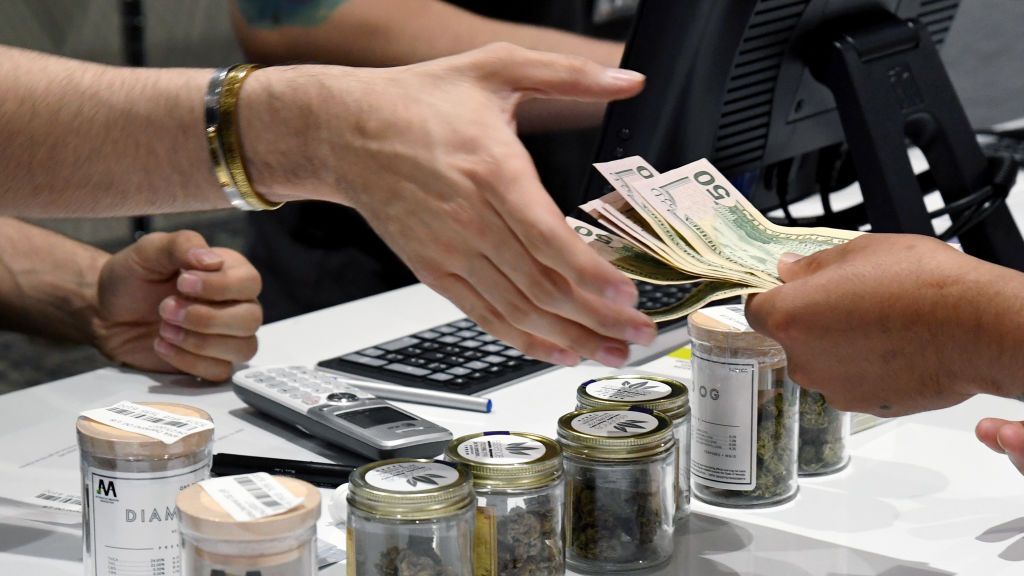 A complex mix of history, social, political and economic issues has made owning a cannabis business in the United States particularly difficult for black Americans. (Ethan Miller/Getty Images)

On the day Joseph R. Biden Jr. was sworn in as president in 2021, an eclectic mix of demonstrators convened at the Colorado state capitol building in Denver. Among them that January day was DonQuenick Beasley, who had a message different from others in the crowd.

The Bible-quoting black cannabis-rights activist held a sign saying “Give Us Our harvest” and at one point shouted down other demonstrators so she could talk about the injustice she sees in an industry dominated by white men while black men languish in prison for non-violent marijuana convictions.

“Give us our harvest” was her call for those prisoners to be released, trained and allowed to enter the legal cannabis industry, growing marijuana in fields where slaves once picked cotton.

“Give them their ownership,” Beasley told Zenger in a later interview.

A complex mix of history, social, political and economic issues has made owning a cannabis business in the United States particularly difficult for black Americans.

While about 14 percent of the U.S. population is black, only 2 percent of about 30,000 cannabis businesses in the nation are owned by black people, according to a study from Leafly, a cannabis education website and online marketplace.

Financing is an issue for the entire legal cannabis industry in the United States. The banking system is regulated at the federal level, where marijuana remains illegal, leaving banks open to charges of money laundering or aiding and abetting a crime unless they file an enormous amount of paperwork, experts say. Many banks don’t want the hassle.

If white people are having a difficult time with financing, then black people and other minorities are faring worse, said Kassia Graham, director of community and strategy with Cannaclusive, a marketing firm that promotes fair representation of minority cannabis consumers.

“Get people out of jail, give them a license, but how are they supposed to do anything if they don’t have any money?” said Matt Karnes, founder of cannabis research and consulting firm GreenWave Advisors.

Women of color in particular have trouble getting funding because of a perception that they can’t deliver profitable companies for investors, said Carmen Brace, founder of cannabis research firm Aclara Research.

Getting access to capital is the main barrier to women of color having leadership roles in the cannabis industry, Michele Harrington, head of strategic partnerships with Foria Wellness, said.

“Licenses are expensive to get,” she said. Her company produces hemp-derived health and sexual-wellness products.

In the early days of legalization efforts, state governments often set high license application fees and prohibited those with prior marijuana convictions from entering the business, according to the Leafly report. License fees now range from $25,000 to $500,000 depending on the state.

“These unnecessary barriers effectively shut out people of color,” the Leafly study said. “Some states have tried to make amends by offering equity licenses but without providing any way for equity applicants to find and obtain the necessary startup funding.”

Equity cannabis ownership programs are ineffective or non-existent in many states, Graham of Cannaclusive said.

Even in those that have social equity licensing programs, some large companies set up predatory partnerships in which a person of color is used as “window dressing,” said Morgan Fox, media relations director with the National Cannabis Industry Association.

Just because a state has an equity license program doesn’t necessarily mean black people will be proportionally represented. In Colorado, which along with Washington in 2012 was the first state to legalize recreational marijuana use, black people hold just 2.9 percent of cannabis owner licenses even though they make up 4.6 percent of the population, according to data from the state’s revenue department and the U.S. Census Bureau.

By 2025, legal cannabis sales in the United States could reach $43.5 billion, more than double the $20.3 million spent in 2020, according to cannabis business intelligence company New Frontier Data.

Tiffany Bowden, a diversity and communications consultant long involved in the cannabis industry, said people in the business in Los Angeles have told her they’ve been approached by consultants offering to pay them $250,000 for their social equity eligibility. Under such a scheme, they would be a 51 percent owner in a cannabis business on paper but wouldn’t gain anything further from the company’s expansion.

Despite the hardships, Bowden said inclusivity in the cannabis industry is improving. “We are making progress, but we still have a far way to go,” she said.