VIDEO: BMW Driver Jailed For Smashing Into Volvo At Twice The Speed Limit

Passengers in both cars were injured in the crash. The driver responsible for the accident was given a prison sentence.
By Peter Barker January 27, 2022
Facebook
Twitter
Linkedin
Email 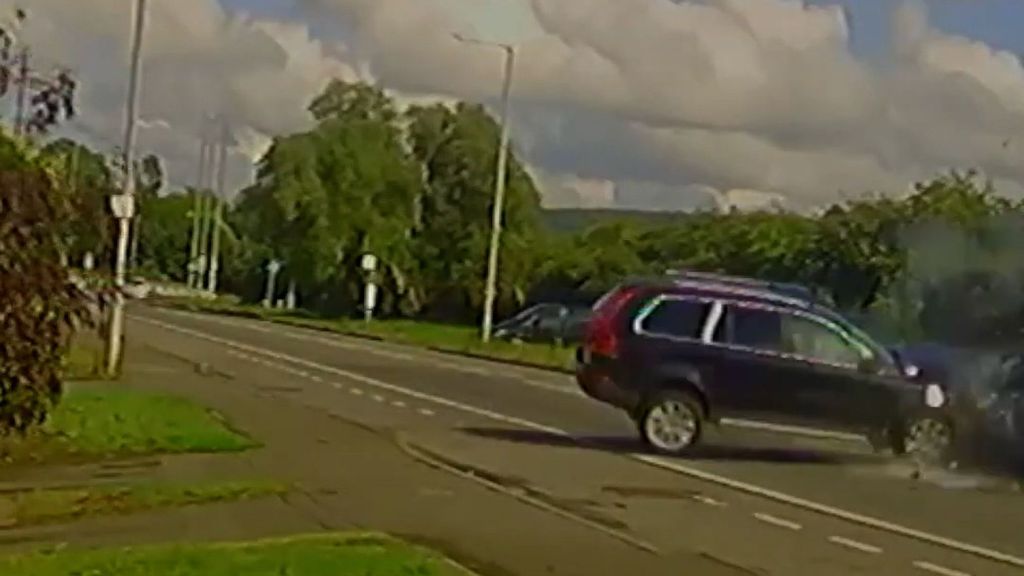 Geoffrey Hill smashed his BMW into the front of another car while speeding through the streets of Aylesbury, England, injuring both passengers.  (Thames Valley Police/Zenger)

A BMW driver smashed head-on into a black Volvo at twice the allowed speed, resulting in his being jailed for over two years on Jan. 21.

The crash took place in Aylesbury, England, in the county of Buckinghamshire, on June 8, 2020.

Geoffrey Hill, from Hemel Hempstead in Hertfordshire, pleaded guilty to two counts of causing serious injury by dangerous driving at Amersham Crown Court on Nov. 1, 2021. A third count of the same charge was ordered to lie on file.

The police said: “He was also banned from driving for four years and one month.”

Hill was found to be traveling at more than double the speed limit when the crash took place.

Thames Valley Police said in a statement on Jan. 26: “At just after 5.30 p.m. on 18 June 2020, Hill was driving his gray BMW 330D in excess of 80 mph in a 40 mph limit out of Aylesbury toward Aston Clinton and overtook another vehicle driving within the speed limit.

“Hill collided with another vehicle, a black Volvo, driven by a 60-year-old woman. The two vehicles collided head-on, and the driver of the Volvo suffered a broken ankle.

“Her passenger, a 22-year-old woman sustained a fractured back, while the passenger in Hill’s car sustained double fractures to both legs.”

Investigating officer PC Phil Duthie said: “This is an example of the dangers of driving at excess speed. Hill was traveling at well over twice the limit for the road. The speed he was driving his vehicle was completely unacceptable.

“Three people suffered serious injuries as a result of Hill’s dangerous driving, and it was only a matter of fortune that nobody was killed as a result of his actions.

“The driver of the Volvo could have not expected to be confronted with a vehicle driving at such speeds in this area, and had no time whatsoever to react.

“I would like to thank the members of the public who immediately came to the aid of the victims of this collision, and also the swift response from South Central Ambulance Service.

“Hill will now have to serve a prison sentence as a result of this appalling driving and when he is released, he will be disqualified from driving and will need to take an extended test in order to regain his license.

“Thames Valley Police will never tolerate driving of this nature and will always look to bring offenders to justice.”