The regeneration of limbs, and even organs, offers hope to the growing number of amputees.
By Martin M Barillas January 27, 2022
Facebook
Twitter
Linkedin
Email 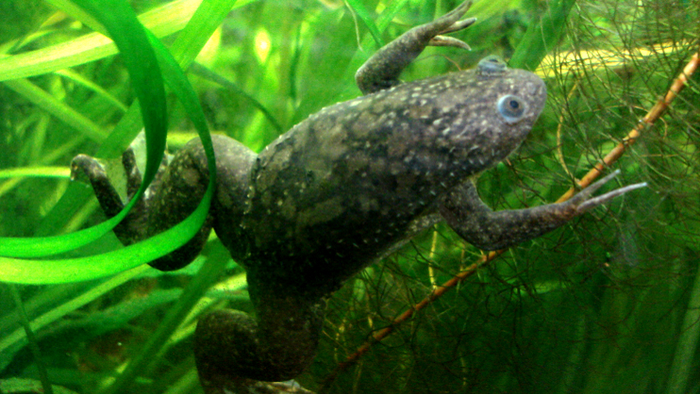 Scientists at Tufts University were able to regenerate the lost leg of an African clawed frog (Xenopus laevis) by using an acute multidrug delivery via a wearable bioreactor. Pictured here is a normal African clawed frog. (Pouzin Olivier)

Scientists have taken another step forward in advancing hope for patients who have lost limbs, by regenerating the limb of an adult frog with a combination of drugs and a unique delivery device.

The researchers applied a cocktail of five drugs to the stump of the limb, before covering it with a wearable silicone bioreactor dome. The medicine was sealed in place for 24 hours, which then started an 18-month process of restoring a functional leg.

Many animals, such as crabs, lizards, salamanders and sea stars, are able to regenerate limbs, but adult frogs do not have that ability. Microscopic flatworms that are diced up can regenerate into a complete organism from each piece. In their own healing process, human beings can close up wounds with new tissue growth. Human livers are able to regenerate even after a 50 percent loss of healthy tissue.

So far, no natural process has been found in humans or animals to restore any large and structurally complex limbs. The loss of a limb among humans requires surgery to prevent infection or further loss of blood, leaving significant scarring, which prevents new growth.

The stakes are high, according to the study. Human limb loss in the United States will increase substantially over the next 30 years, reaching 3.6 million individuals per year by 2050. These individuals will have limited options after an amputation. The authors suggest that their approach could aid in regenerating complex human organs.

The silicone cap or bioreactor, dubbed “BioDome” by the researchers, is made of a silk protein gel that contains a combination of five drugs. The bioreactor and drugs produce an environment and signals that favor regeneration instead of the natural tendency of scarring and sealing off the stump.

“It [was] exciting to see that the drugs we selected were helping to create an almost complete limb,” said lead author Nirosha Murugan of Tufts. “The fact that it required only a brief exposure to the drugs to set in motion a months-long regeneration process suggests that frogs and perhaps other animals may have dormant regenerative capabilities that can be triggered into action.”

Animals such as salamanders, which are capable of natural regeneration, are mostly aquatic. Following the loss of a limb, the first step of regrowth is the formation of a blastema — a mass of stem cells at the end of the stump, which gradually restores the lost limb. Within 24 hours of injury, the wounds are covered by skin cells that protect the tissue being reconstructed.

“Mammals and other regenerating animals will usually have their injuries exposed to air or making contact with the ground, and they can take days to weeks to close up with scar tissue,” said co-author David Kaplan, also of Tufts. “Using the BioDome cap in the first 24 hours helps mimic an amniotic-like environment which, along with the right drugs, allows the rebuilding process to proceed without the interference of scar tissue.”

During the study, the researchers watched as the treated frog experienced the dramatic growth of tissue to produce a nearly fully functional leg. The regenerated limbs had bone structure resembling that of a natural limb as well as toe-like appendages that grew from the end of the limb, though without the support of bone underneath. Internal tissues, such as neurons, also saw regrowth. The new leg responded to touches with a stiff fiber and other stimuli, and the treated frogs were able to swim much like any normal frog would.

Further research of the drugs and BioDome will be conducted to regrow functionally complete limbs.

“We’ll be testing how this treatment could apply to mammals next,” said co-author Michael Levin. “Covering the open wound with a liquid environment under the BioDome, with the right drug cocktail&mldr;is a strategy focused on triggering dormant, inherent anatomical patterning programs, not micromanaging complex growth, since adult animals still have the information needed to make their body structures.”