The animal was first seen in a Florida hotel, then escaped inside an SUV, where it got trapped. 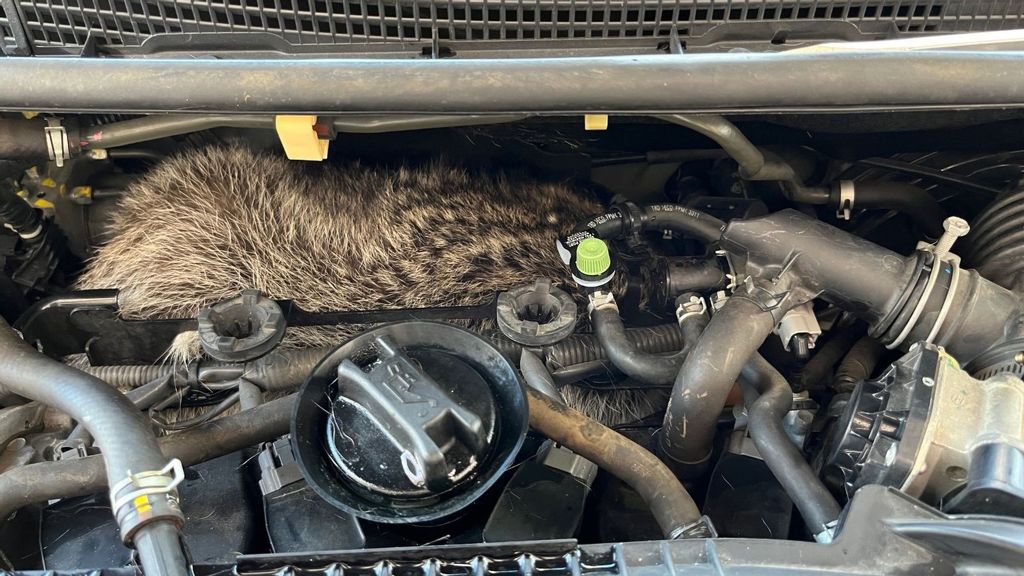 The hotel-invading raccoon was tightly compressed in the engine compartment of an SUV in Bradenton, Florida. (Wildlife, Inc./Zenger)

Volunteers rescued a sedated raccoon from inside a car engine at a Florida hotel.

The rescue was filmed outside the Bridge Street Hotel in Bradenton, Florida, on Jan. 13.

The Wildlife, Inc. Education and Rehabilitation Center shared footage of the rescue on social media with the message: “On the morning of Thursday, January 13th, a call came into Wildlife Inc. There was a raccoon on the third floor of the Bridge Street Hotel.

“One volunteer arrived within minutes and assessed it was a fully grown raccoon, which appeared to have a limp, but otherwise seemed healthy.

“During the rescue attempt, the raccoon squeezed through a narrow gap in the railing on the stairs. It scurried down the stairs to the ground floor confused, scared and potentially injured!

“Once on the ground floor, the raccoon quickly darted under the parked cars near its landing spot. Hotel staff and the volunteer continued to attempt to get it in the cage.

“This proved to be pointless as the raccoon wrangled its way up into the engine of a 2013 Nissan Sentra!”

The organization, which claims to be the largest wildlife rehabilitation and rescue center in Manatee County, Florida, said: “Just as Raquel Rangel, Celeste Maldonado and Misha Maldonado were preparing to leave, the staff and volunteer were attempting to find the owners of the raccoon’s newest home! The owners of the car were genuinely concerned for the safety of the raccoon, as well as other motorists.

“After several hours of trying to coax the raccoon out from the engine block … the raccoon proved to be stuck with no way to go forward and unable to turn around in the tight spot to leave the way it arrived!”

The center, which has taken in more than 3,000 animals since 1987 as part of its mission to rehabilitate injured and orphaned wildlife, said: “Dr. Bystrom administered a small sedative to the raccoon to relax it and give Gail the opportunity to safely remove the raccoon from the car’s engine block.

“Finally, the raccoon was taken to Wildlife Inc for a thorough examination and any needed rehabilitation.

The raccoon received a clean bill of health, and after a few days of recovery, was released.

Separately, two baby raccoons were trapped in the suspension system behind the tires of a car in the Cincinnati area in June 2021 and had to be rescued, reported Fox 19 Now.

Another raccoon, rescued as a baby by a Berlin vet, is now an Instagram star and lives happily with the doctor.

Raccoons are solitary animals, except during the breeding season, which runs from January to June.