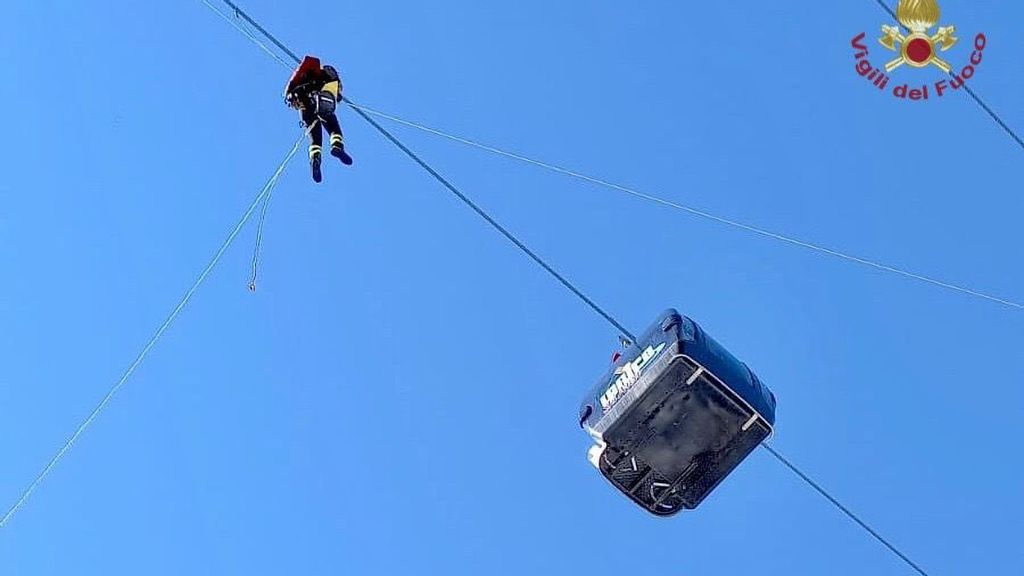 Six stranded employees were rescued from cable cars on a ski lift in Calabria, Italy, on Jan. 23. Their boss, Alessandro Marcelli, died in the accident. (National Firefighter Corps/Zenger)

Six people left dangling high above the ground were rescued after their boss was struck and killed by a cable car.

The incident that killed 60-year-old Alessandro Marcelli and left six others trapped took place at the Lorica ski resort, in Casali del Manco, in the province of Cosenza, in the southern Italian region of Calabria, on Jan. 23.

Marcelli was reportedly carrying out routine checks on the gondola lift and had his back turned, so he did not see another cable car coming toward him. He was hit by it and thrown to the ground.

The emergency services were alerted, but when they arrived on the scene, they could only confirm Marcellli had died.

As a security measure, the system was shut down after the accident, leaving the six people, all employees at the ski resort, stuck in the cable cars.

All six were successfully rescued during the operation, which took a few hours and was carried out by firefighters.

Following the incident, the mayor of the city of Cosenza, Franz Caruso, said: “In full compliance with the investigations in progress and which are delegated to the competent authorities, we cannot, as an institution, fail to stress once again the need to guarantee, at every level, basic safety conditions in the workplace.

“In the absence of which, we will continue, unfortunately, to count further victims, a number that increases every day throughout the country.”

The president of the Calabria Region, Roberto Occhiuto, expressed his condolences after the tragic event and said he hopes “the judiciary sheds full light” on the incident, Calabrian news station LaC News24 reported.

The police are investigating the incident in order to ascertain who is responsible for the event. It is currently unclear if the authorities plan to autopsy the victim.

There was a previous cable car accident in Italy in May 2021. Fourteen people were killed, including two children, when the brakes failed. The cable car was traveling at more than 62 mph when the cable broke.

Investigators say the emergency brakes had been disabled and the three members of the operating company were aware of the faulty system. The car dove 65 feet into the side of the Mottarone mountain near Lake Maggiore in northern Italy’s Alpine region, reported BBC News.