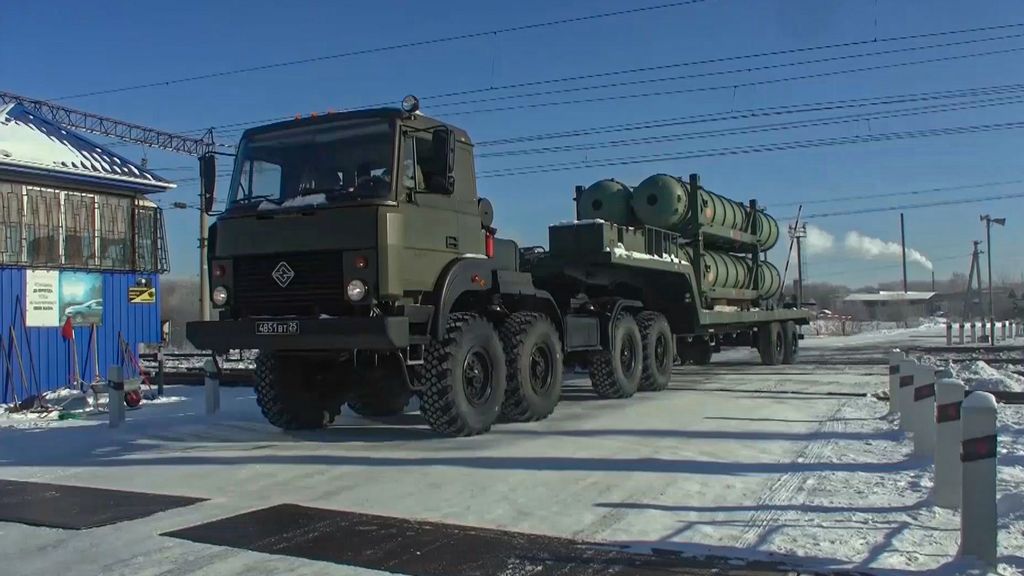 Two divisions of S-400 ‘Triumph’ air-defense missile systems of the Russian Air Defense Forces were loaded onto a train in Khabarovsk, Russia, to be transported to Belarus. (Russian Ministry of Defense/Zenger)

Russian missile systems were loaded onto a train in the far east of the country before being shipped west to Belarus amid rising tensions in the region.

The missiles were transported from the Khabarovsk Krai region amid rising tensions between NATO and Moscow, which have led many to speculate that the former Soviet superpower may be on the verge of invading its neighbor, Ukraine.

The footage shows Russian soldiers carefully waving the vehicles forward, helping their drivers maneuver them onto the open-top train wagon.

The soldiers can be seen placing various aids for the wheels of the vehicles to drive on as they are loaded onto the train.

“Two divisions of the S-400 ‘Triumph’ air defense missile system of the Air Defense Forces, … loaded equipment onto railway platforms in the Khabarovsk Territory,” the ministry said in a statement.

“Air defense units will march in a combined way on railway transport and on their own to unfamiliar training grounds in the Republic of Belarus.

“Upon arrival … the Russian military personnel will carry out equipment and camouflage of launch positions, maintenance of equipment and take up combat training for air defense as part of the Unified Regional Air Defense System of Belarus and Russia.”

The deployment will take place in two phases, the ministry said.

In the first stage, which will run until Feb. 9, the assignment of groupings of forces in Belarus will be carried out “as soon as possible,” the ministry said.

To follow will be the “organization of protection and defense of important state and military facilities, protection of the State Border in the airspace, verification of the readiness and ability of air defense forces on duty and means to fulfill the tasks of covering important objects on the territory of the Republic of Belarus.”

During the second stage, planned for Feb. 10 to Feb. 20, joint ‘Allied Resolve-2022’ exercises will be held. The exercise will cover “suppressing and repelling external aggression, as well as countering terrorism and protecting the interests of the Union State,” the ministry said.

“During the exercise, measures will be taken to strengthen the protection of the State Border to prevent the penetration of armed groups of militants, to block the channels for the delivery of weapons and ammunition, as well as to search for, block, and destroy illegal armed formations and sabotage and reconnaissance groups of a mock enemy.”

The S-400 missile system, officially codenamed Triumph, is a mobile surface-to-air missile system that went into service in 2007.