An Alaskan bear takes a break from his winter hibernation to check out his surroundings.
By Lee Bullen January 23, 2022
Facebook
Twitter
Linkedin
Email 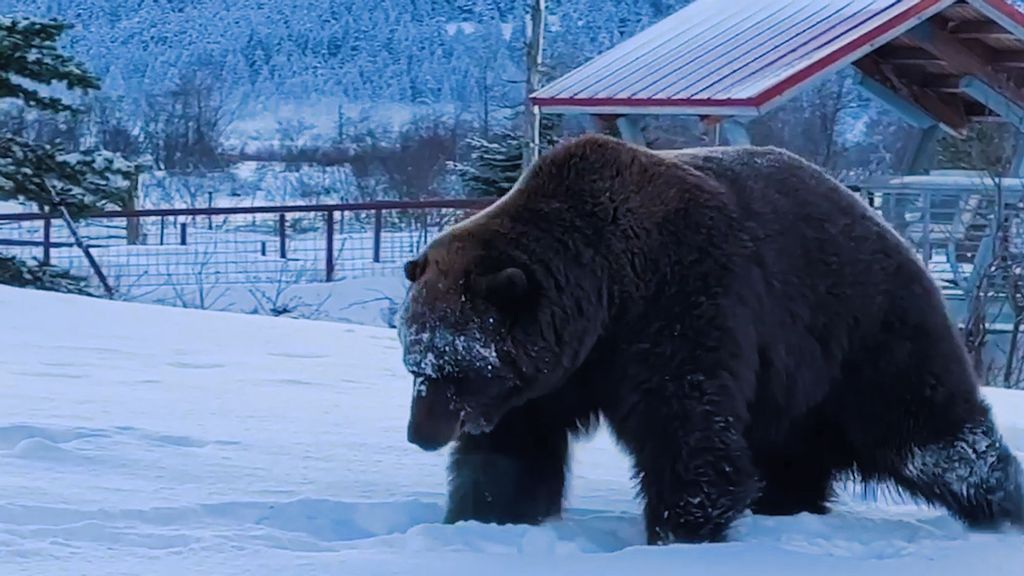 JB woke from his winter slumber and ventured outside his den in Alaska. (Alaska Wildlife Conservation Center/Zenger)

JB, a big brown bear, is supposed to hibernate during the winter. But he woke from his winter sleep at an Alaskan conservation center and decided to take a walk in the snow before bedding down again for additional nap time.

The video was filmed at the Alaska Wildlife Conservation Center in Anchorage, Alaska, on Jan. 16.

The center posted the video on social media on Jan. 17 with the message: “The big boy JB was out of the den today, checking things out!

“Go back to sleep JB, it’s only mid-January!”

Alex Roberto, social media and administrative manager for the center, said: “I took this video myself to share on AWCC’s social-media platforms. Some of our bears were awake and out of their dens this past weekend.

“Many animals once thought to hibernate, including bears, really only enter a lighter sleep-state known as torpor — an interesting fact that not everyone knows about!

“Occasionally, bears may wake during the winter and stumble out of their dens for a brief period of time, before eventually going back to sleep. Our curator Sarah Howard says: ‘When bears wake up, it’s not for long, and the cold and snow usually signals to them to go back to bed.'”

“The Alaska Wildlife Conservation Center’s animals are our greatest ambassadors. Most of the animals that have come to AWCC have either been orphaned or injured,” Roberto said.

“With consent from the Alaska Department of Fish and Game, animals taken in by AWCC are cared for by our staff and are given a permanent home at AWCC,” he said. “This particular video features JB, short for Joe Boxer, our male coastal brown bear.”

Brown bears, which are solitary creatures, live along the southern coast of Alaska, where they enjoy the plentiful spawning salmon. The coastal areas are also a rich source of vegetation they can use as food, as well as a milder climate. Brown bears are usually larger than black bears, with a more prominent shoulder hump, small, rounded ears and longer claws, which are helpful in digging roots or finding small mammals.

Large male brown bears usually weigh over 1,000 pounds and mate from May through early August. Grizzly bears and brown bears are the same species, though grizzlies are considered a separate subspecies.