The explosive exercise was part of an event dedicated to the 321st anniversary of the founding of the engineering troops.
By Joseph Golder January 22, 2022
Facebook
Twitter
Linkedin
Email 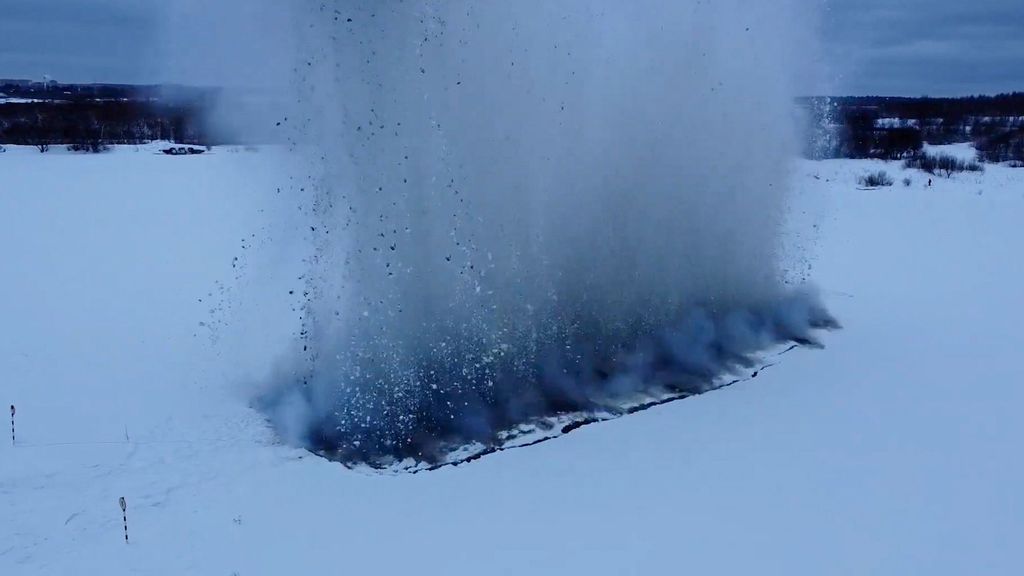 Russian army engineers cleared a river by using TNT to dislodge a massive amount of ice. (Russian Ministry of Defense/Zenger)

Engineering units of the Russian Guards Tank Army of the Western Military District blew up a frozen river in a special tactical exercise for an event dedicated to the 321st anniversary of the founding of the engineering troops, Russia’s Ministry of Defense said.

The ministry posted video of the engineers in action in the Moscow region.

“About 10 demolition teams carried out work to free the rivers from ice. More than 75 kg (165 pounds) of TNT was used to undermine the ice,” the ministry said.  “Floating transporters, towing and motorboats and a pontoon-bridge park were used to guide the crossing. The crossing was organized for the transfer of automotive and tracked vehicles.”

During the exercise, military personnel, with the help of mine detection dogs and an IMP-2 induction mine detector, also checked and cleared about 4.3 miles (7 kilometers) of roads, the Ministry of Defense said.

“In total, more than 600 military personnel and over 200 weapons, military and special equipment of the engineering units of the tank army of the Western Military District were involved in the exercise.”

The military is often called on to break up ice that clogs rivers, particularly in the far reaches of the Russian Federation.

“The first blasting operations of [2021] took place in the republic — on the Berlya River near the village of Chipmunks in the Kaibitsky district of Tatarstan. The riverbed is winding, while covered with ice, runs along the entire settlement, and with the rapid melting of snow can bring a lot of problems,” the ministry said.

“After 16 explosions, the ice broke, and the water flow went along the riverbed. In total, military engineers spent 25 kilograms [55 pounds] of TNT, blowing up the ice on an area of 300 square meters [3,229 square feet].

“Such preventive measures ensure the safe passage of water.”