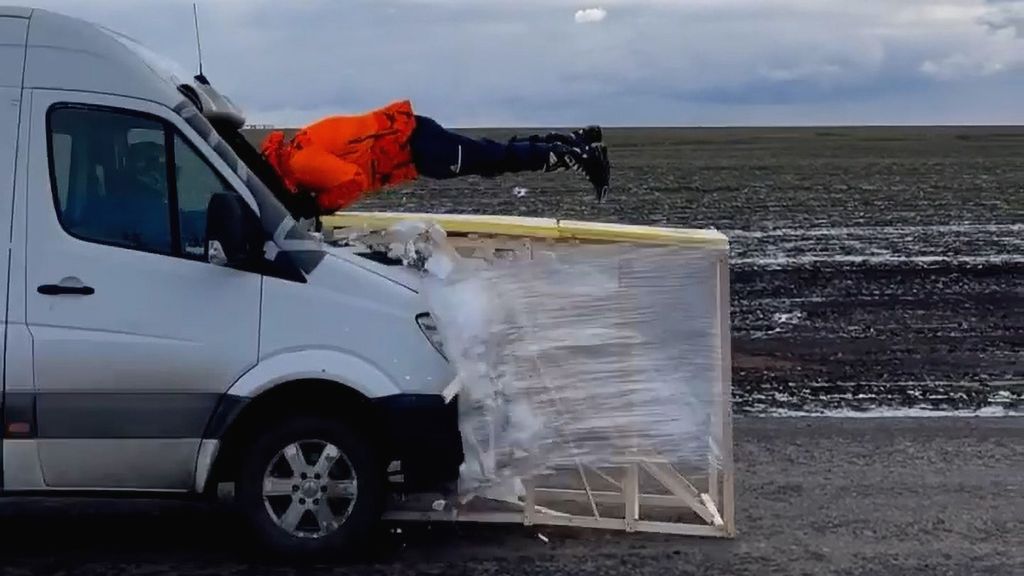 Evgeny Chebotarev flies through the windshield of a minibus going 50 mph in Russia. (@chebotarev_evgeny/Zenger/TMX)

A Russian stuntman who broke his back four months ago is captured on a video in another wild stunt where he flies through a minibus going 50 mph.

Evgeny Chebotarev, 30, fractured his spine while filming another video months ago, but returned this week to hurl himself through the windshield of the 23-foot-long minibus, which was carrying passengers in Russia.

The stunt influencer posted clips of his exploits on Instagram, where he has nearly 800,000 followers.

The video of him flying through the inside of the Mercedes minibus has gone viral, with 1.1 million views in four days.

“Rate the trick from 1 to 10 points. And what was the danger?” Chebotarev posted along with video of his most recent stunt.

In the footage, Chebotarev is seen lying on a wooden structure in the road as the minibus drives toward him at 50 mph (80 kph).

He raises his body slightly as the minibus slams into the wooden frame, and he hovers in the air as the vehicle passes, eventually flying through the open back doors and landing on the road.

Passengers are seen seated inside the vehicle, including one man who appears to be reading a book.

Chebotarev said he clipped his foot on the open windshield while carrying out the stunt, but was uninjured thanks to his heavy boots.

He called the stunt “the world’s first minibus flight.”

In September last year, Chebotarev told his fans that he fractured his spine while jumping 131 feet (40 meters) across a river in a BMW 5 E34.

“I am sitting here trying to understand – was I Superman or Spiderman?” he posted.

He got rave reviews from his followers.

After the incident in which he hurt his spine, he said from his hospital bed: “I will struggle to live a fulfilling life.”

But things started looking up when he posted that his team of doctors “put me on my feet in two days.”

He went on to make a quick recovery, saying: “Yeh I broke my spine… but I just got stronger.”

He told his followers: “I started with parkour and acrobatics… I’m always on adrenaline, very active and want to be on the move.

“I train a lot, lift weights in the winter and do acrobatics when it gets warmer… As far as I can remember, I’ve always liked extremes.