“I’m not trying to be the next Manny Pacquiao. I’m trying to put my own mark on the history of the sport,” said Magsayo. 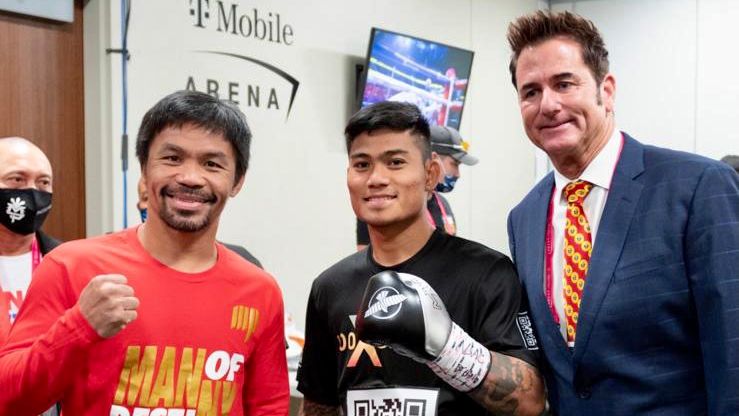 Manny Pacquiao says Mark Magsayo “reminds me of myself.”

The Pac Man made his assessment when he signed his Filipino countryman to a promotional contract ahead of “Magnifico” Magsayo’s 10-round split-decision over southpaw Rigoberto Hermosillo in October 2020.

Two fights and as many knockouts later, Magsayo (23–0, 16 KOs) hopes to join his childhood idol as a champion from the Philippines on Jan. 22 by dethroning southpaw WBC 126-pound titleholder Gary Russell Jr. (31–1, 18 KOs). The Premier Boxing Champions Event in Atlantic City, New Jersey, airs on Showtime.

Magsayo is fighting Russell exactly 27 years to the day after Pacquiao’s professional debut at 106 pounds in a four-round unanimous decision over Edmund Enting Ignacio.

“Gary Russell is a southpaw with speed just like Senator Manny Pacquiao is, but I’m not trying to be the next Manny Pacquiao. I’m trying to put my own mark on the history of this sport and for all Filipinos. I’m hungry to prove it all in the ring. My mindset is that I’m going to overcome whatever it is that I have to and win the fight,” said Magsayo.

“I can punch with my left and the right hands with equal power. I’ve prepared for 12 rounds, but if the opportunity presents itself, I will go for the knockout against Gary Russell. Whether it’s a knockout or a decision, I have no doubt that I will beat Gary Russell. I don’t predict the round, but I think I can get the knockout.”

Born five months after Pacquiao’s pro debut in June 1995, Magsayo grew up in the small coastal town of Dauis, in the province of Bohol. He worked in his family’s bakery and later entered a gymnasium he spotted as an 8-year-old while selling ice cream on the streets of Tagbilaran City.

That eight-year-old Magsayo watched Pacquiao, who had lost his first of three amateur fights, rise from a first-round knockdown in November 2003 to floor Marco Antonio Barrera in the third round of an 11th-round TKO.

“I got inspired seeing Manny Pacquiao’s fight with Marco Antonio Barrera. I thought, ‘Maybe I can be like him,’” said Magsayo, 26, who fights on American soil for the sixth time against Russell.

“Manny Pacquiao is my idol, ever since I was a kid. I started training at 8 years old because of him to one day become world champion. Now that time is here. I’m so happy that Manny signed me to his promotional company and I’m grateful.”

Fighting on the undercard of 42-year-old Pacquiao’s last career bout in August 2021 — a unanimous decision loss in to WBA 147-pound champion Yordenis Ugas — Magsayo rose from a fifth-round knockdown to win his last fight in a come-from-behind, 10th-round stoppage of former champion Julio Ceja.

Ceja was floored once each in the final rounds by Magsayo, who executed a highlight-reel backflip following a stoppage voted Knockout of the Year on Premier Boxing Champions’ Twitter and YouTube polls.

“I learned a lot from the Ceja fight. That gave me a lesson on how to adjust in the middle of a fight. It’s going to help me against Russell,” said Magsayo, who faces Russell in his fourth straight fight under Pacquiao’s former trainer, Freddie Roach.

“We haven’t talked to Sen. Manny Pacquiao about the fight because he’s in the Philippines, but coach Freddie is teaching me a lot about Gary Russell’s style, like how to use my angles to move in and out while also applying pressure like Manny Pacquiao does.”

Pacquiao (62–8–2, 39 KOs) retired as an eight-division title winner after falling to Ugas, having become the oldest man to win a welterweight title with a one-knockdown, unanimous decision over previously unbeaten WBA titleholder Keith Thurman in July 2019.

Gaballo, 25, was Donaire’s first defense of the crown earned as a 38-year-old in May 2021, when his three-knockdown, fourth-round knockout dethroned previously unbeaten Nordine Oubaali, making Donaire the oldest man to win a bantamweight crown.

“It’s my goal and my dream to become a Filipino world champion like Nonito Donaire and Manny Pacquiao, which is why I’ve been training for three months to fight Gary Russell,” said Magsayo.

“This is my first southpaw since Hermosillo, but Hermosillo is more of a come-forward fighter and Gary Russell has hand speed and footwork. I learned a lot about making adjustments in the Hermosillo fight.”

Russell is 7–0 (4 KOs) since June 2014, when he lost by majority decision to three-division champion Vasyl Lomachenko. “Mr.” Russell’s run includes knockouts of current or former champions Jhonny Gonzalez (March 2015), Oscar Escandon (May 2017) and Kiko Martinez (May 2019) in the fourth, seventh and fifth rounds, and a unanimous decision over previously unbeaten champion Joseph Diaz (May 2018).

In his last fight in February 2020, Russell successfully defended his crown by unanimous decision over Mongolia’s Tugstsogt Nayamar, who entered at 11–0 (9 KOs).

“I consider Manny Pacquiao a legend in the sport of boxing with a good eye to determine that he feels Mark Magsayo’s talented fighter. I see him as a good even-handed puncher, maybe he leans a little more to the right hand,” said Russell, 33.

“I don’t have any concerns with Magsayo’s power. He has good punching power, but none of that matters if you can’t hit your target. You very seldom see me have to come back on the scorecards. Magsayo had to come back in his last fight because he was losing on the cards. That shows some holes in his armor.”

“I told my promoter, [MP Promotions President] Sean Gibbons, I wanted Gary Russell Jr. I believe that my style is very well suited for his style. Gary doesn’t see me as being able to box and move in and out, but I’m going to prove myself in this fight. I’ve had great sparring partners to prepare me for Russell and give me the same looks that he’ll give me on fight night,” said Magsayo, who trains at Roach’s Wild Card Gym in Los Angeles.

“I get a lot of work with fighters like Jaylan Walker. I sparred with Jerwin Ancajas who is a champion and a great fighter. [Walker] has a similar style to Gary Russell’s, and Ancajas does a great job emulating Gary Russell as well. I don’t think Gary has faced anyone since he became champion that has the skills that I have. I’m going to go in there to show him something he’s never seen before and we’ll see how he reacts.”

Magsayo earned $4 per bout as an amateur “to buy food for my family.” Over the course of 200 fights, Magsayo emerged as a National Champion four times over various divisions at the annual Boxing Association of the Philippines tournament, twice earning the title of the event’s “Best Boxer.”

Seventeen-year-old “Magnifico’s” professional debut was a two-knockdown, first-round stoppage in May 2013 of Nelson Sandal, who was Magsayo’s first of three first-round stoppages that year as part of a 4–0 start. Magsayo’s four-round unanimous decision over John Rey Melligen (August) came over a fighter who entered at 2–0 (one KO).

Ending a 13-month ring absence against Hermosillo, Magsayo opened a cut over his rival’s right eye in the first round. A late replacement who entered at 11–3 (8 KOs), Hermosillo nailed Magsayo to the face on numerous occasions, out-landing the winner, 181–136 in overall punches.

“[Magsayo’s] one of the best punchers in the gym and knocks people down all of the time,” said Roach, who was training Magsayo for the first time. “But he wasn’t letting his hands go. I kept urging him to throw more combinations and use more power.”

Magsayo won his fourth and fifth bouts on American soil in 2021, scoring a pair of sensational knockouts in his defeat of Ceja and a three-knockdown, fourth-round TKO over Pablo Cruz in April.

Cruz attempted to rise from the third knockdown before the referee determined he had absorbed too much punishment and waved an end to the bout.

Ceja was floored by a perfect left hook from Magsayo in the first round and dropped Magsayo with the same punch in the fifth before being knocked cold by a straight right in the 10th.

“I kept working it round after round and when I saw he was hurt, I followed up. I expected his style to make it happen and I expected a knockout tonight. Whether I get knocked down, cut or headbutted, if I can see my opponent, he’s in trouble. I learned a lot from the Ceja fight,” said Magsayo, who trailed Ceja, 86–83 on two cards and 87–82, on the third.

”Being knocked down was a surprise, but I focused my mind on what I wanted, a world championship shot. It’s my dream. Coach Freddie said to me in that fight that our plan for the first half was to brawl, but once we recognized how hard of a puncher he was, we made our adjustments in rounds five and six and concentrated on punching without getting punched back. That gave me a lesson on how to adjust in the middle of a fight. It’s going to help me against Russell.”

Magsayo vows to be at the top of his game against Russell.

“This is the fight that I’ve wanted for a long time. I’ve been waiting patiently for my chance, and I’m going to show the world that I’m the best at this weight. I’m going to be the stronger fighter against Russell. We trained every day with Freddie Roach, and we’ve worked on a lot of different techniques we’ll use in this fight,” said Magsayo.

“I want to prove to the people everywhere that I’m the best featherweight in the world. I know he’s going to bring his talent into the ring, but I’m going to show everybody that I can deliver a great fight and become champion. I respect Gary Russell Jr. He’s a great champion, but I’m winning this fight on Jan. 22.”