Visitors will flip for the 14,360-pound frying pan, which highlights the culture of the Lodge Cast Iron company.
By Joseph Golder January 20, 2022
Facebook
Twitter
Linkedin
Email 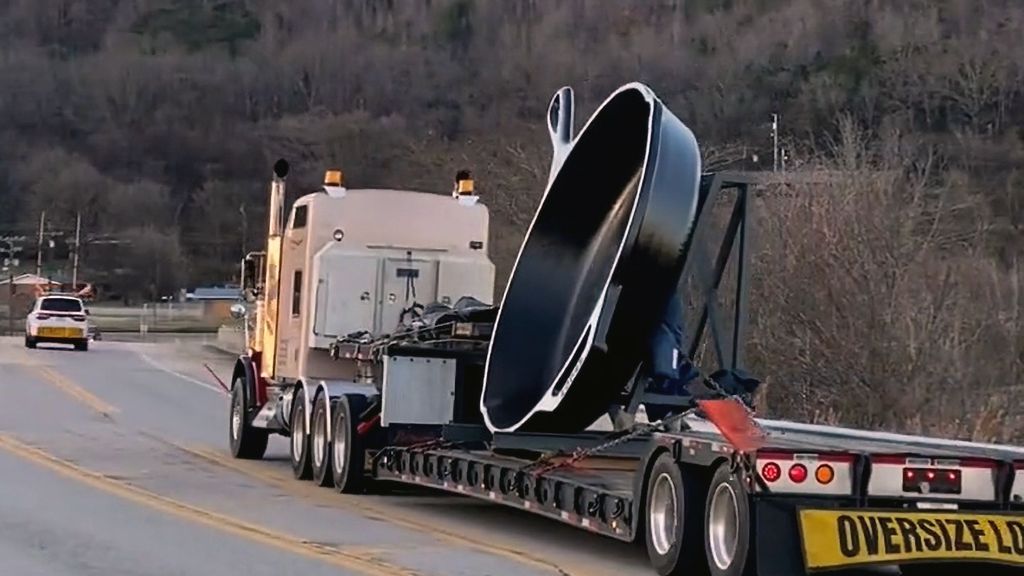 The world's largest cast-iron frying pan is on a Tennessee highway headed to the Lodge Cast Iron Museum in South Pittsburg, Tennessee. The museum opens in the summer of 2022. (Lodge Cast Iron/Zenger/TMX)

The world’s largest cast-iron frying pan was transported in mid-January to the Lodge Cast Iron Museum, now being built in Tennessee.

The museum, still under construction, is set to open in the summer of 2022. It is based in South Pittsburg, Tennessee, home of the famous Lodge Cast Iron pan-making company since 1896.

The footage shows the oversized frying pan, also known as a skillet, which was created by Lodge Cast Iron, on the back of a truck on Interstate 59 heading to South Pittsburg.

Lodge Cast Iron shared the images on social media and said: “If you were driving down I-59 yesterday [Jan. 12], you might have seen something special headed north! The World’s Largest Cast Iron Skillet made its way to our campus to find its home in the Lodge Cast Iron Museum that is currently under construction.”

Cast iron is iron that has been melted, poured into a mold and allowed to solidify. Cast iron is often used in deep-frying, as it holds heat well.

The museum will offer a variety of interactive experiences that guide visitors through three exhibitions: How It’s Made, a recreation of the foundry experience, Lodge History and Legacy, and Cast Iron Culture.

Visitors will also see rare cast-iron collections and learn the stories about the people behind them.

He called the museum “an exciting opportunity to celebrate our community and share Lodge with the world through this unmatched experience.”

Lodge Cast Iron said on its site: “Since 1896, Lodge has manufactured heirloom-quality cast iron cookware at its foundries in South Pittsburg, TN. Whether baking bread, grilling vegetables, or searing steak, Lodge’s long-lasting products are an indispensable part of daily life and work … The Lodge Cast Iron Museum, opening in late summer 2022, will bring this legacy to life.”

Lodge Cast Iron, officially the Lodge Manufacturing Company, was founded by Joseph Lodge and is one of the United States’ oldest cookware companies still in operation. The company is owned by descendants of the Lodge family.