Officer reached inside through smoke and flames to pull passenger to safety.
By Lee Bullen January 20, 2022
Facebook
Twitter
Linkedin
Email 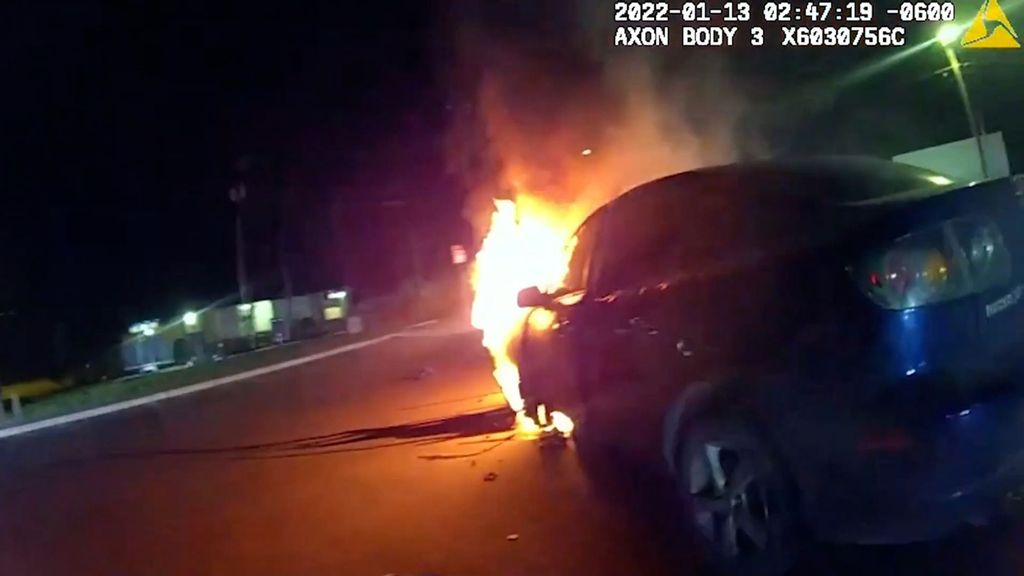 Video shows the dramatic moment a police officer in Texas rescues a trapped passenger in a burning car while trying to put the fire out with an extinguisher in the early morning of Jan. 13.

“San Antonio Police Officer Bianca Garcia jumped into action … when she was dispatched to a vehicle fire in a parking lot in the 2000 block of West Hildebrand Avenue. When Officer Garcia arrived on scene, bystanders told her a woman was still trapped in the vehicle,” the San Antonio Police Department posted online along with the video.

“Without hesitation, Officer Garcia quickly threw on a pair of gloves and ran toward the flames, trying to pry open the passenger’s side door. When that didn’t work, Officer Garcia went to the other side of the vehicle and reached inside as the flames continued to spread,” the police department said in its post.

Police said the female passenger was unconscious, but quickly regained consciousness after being pulled from the car. Neither the driver nor the passenger was seriously injured. They did not want to go to the hospital.

“You can always count on San Antonio Police to respond in any way we know how.”

After the incident, Garcia told KENS5 news: “I was like ‘if this thing was going to blow, let it blow, but I am going to continue to get her out the car.’

“I knew one way or the other I was going to get her out.”

Garcia was first on scene of the car that crashed and caught fire.

When she ran over the car, she told KENS5, “I actually couldn’t see her at first. All I saw was a bunch of smoke and fire.”

Eventually, however, she saw the unconscious woman’s hands.

“I just kept pulling and pulling until she finally started to come loose on the passenger side.

“Hearing my fellow brother officer’s sirens around the corner gave me even more confidence that if I can’t get her out, we are all going to get her out,” she said.

Garcia, who has been with the force for five years, told the news outlet: “I’ll lie if I say that wasn’t scary at all. It is just you have to put it to the back and just keep fighting and pushing.”