Santana Jackson, who is also a professional wrestler, submitted his attacker in a matter of seconds.
By Peter Barker January 20, 2022
Facebook
Twitter
Linkedin
Email 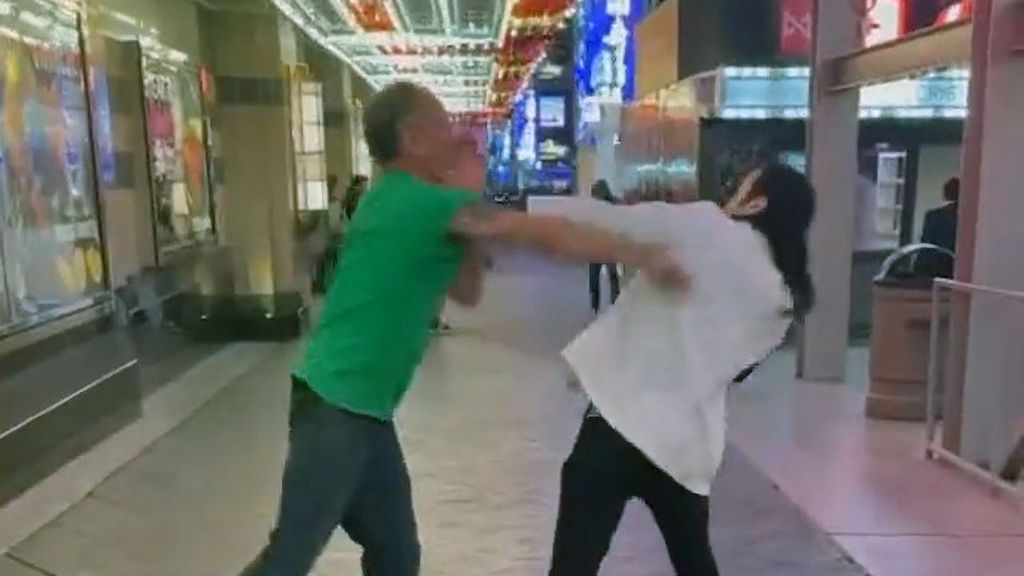 It took the tribute artist, Santana Jackson (right) about 20 seconds to subdue his attacker on the Fremont Street Experience in Las Vegas on Jan. 14. (Marcus Deegan/TMX/Zenger)

The artist, who is also a professional wrestler, showed he had the right ones against a heckler on the Fremont Street Experience in Las Vegas who walked up and punched him on the night of Jan. 14.

The incident was captured on video, which went viral on social media.

Dressed as the pop star, Jackson set himself up in a busker’s circle and was singing when the man approached. The unidentified man punched the Jackson tribute artist, clearly unaware he was a trained fighter.

“The aggressor couldn’t have known, either, that the entertainer had just gone through a breakup earlier in the day and was running pretty hot anyway,”  John Katsilometes reported in the Las Vegas Review-Journal.

“It all added up to Jackson, featured in ‘MJ Live’ at the Tropicana and dressed as the King of Pop, taking down the assailant within about 20 seconds.”

Jackson had appeared on a local TV show that same morning in his Jackson costume to promote “MJ Live.” The popular production reopens Feb. 7 at the Tropicana (it was previously at the Strat).

“That’s why I train. I’m not trying to hurt this guy just trying to restrain him from swinging at me. So I was performing and this guy came out of nowhere and started hitting me so I have to put him down for his own good. Please know I don’t think fighting is the answer so try to avoid a fight if u can. Stay safe.”

Jackson is one of the top Michael Jackson tribute artists in the world, according to “MJ Live” at the Tropicana.

“He has been a dedicated MJ fan since he was 6 years old and is committed to bringing the magic of Michael Jackson to audiences around the world in tribute to one of the greatest performers of all time. With his shocking resemblance to the King of Pop, electrifying dance moves, and extensive MJ wardrobe, Santana has been thrilling audiences internationally for over 14 years.

“Santana gains the most satisfaction from performing to bring smiles and inspiration to others and dedicating himself to the many worthwhile philanthropic events that surround us today. Volunteering his talents for countless hours at charity events, Santana received the prestigious ‘Entertainer of the Year’ award from the national nonprofit ‘Win Win Entertainment’ organization.

“He prides himself on being the best example he can to bring happiness to others through Michel Jackson’s music and starring as Michael Jackson in the ‘MJ Live’ show.”