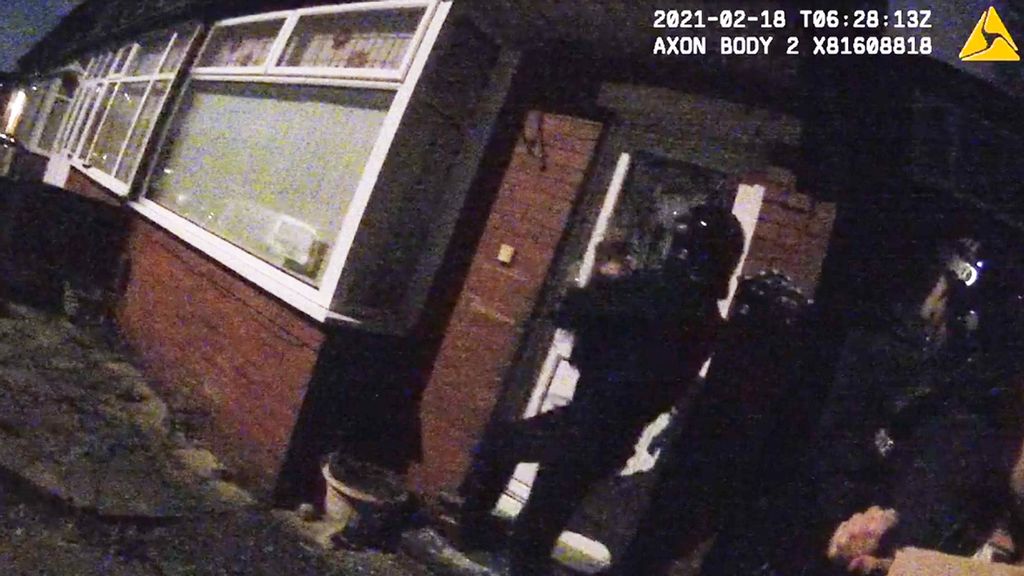 Police officers broke the windows and entered the suspect's property during a February 2021 raid in Greater Manchester in the U.K. They quickly found various drugs, guns and ammo. (Greater Manchester Police/Zenger)

Manchester police raided the home of two admitted drug dealers and seized a Glock handgun, ammunition and blocks of cocaine on Feb. 18, 2021. The two men were sentenced Jan. 17.

Newly released video of the raid shows police officers smashing the windows in their home before one can be heard shouting “go, go, go!” as they burst into the building. The police officers shout: “Police! Stay where you are!” as they storm the property, where they discovered the Glock handgun hidden in a plastic bag.

One officer tells his colleague he believes a small bundle contains ammunition, and after unraveling it, a handful of bullets are seen.

The footage was shared online by the Greater Manchester Police, which announced the two defendants were just sentenced on Jan. 17 at Minshull Street Crown Court.

They have been identified as Jack Wilde, 24, and Tegan Heywood, 20, of Brownwood Avenue, located in Offerton, a suburb of Stockport in Greater Manchester, in the United Kingdom.

They also said Heywood received “a 12-month community order, 15 days rehabilitation activity requirement” and a “two-month tag curfew” after pleading guilty to “being concerned in the supply of cocaine and cannabis.”

The police said: “Following intelligence passed to police regarding the supply of class A drugs in the Offerton area of Stockport, officers executed a warrant at an address on Brownwood Avenue, Offerton on Thursday, 18th February 2021.

“Inside the address at the time were Jack Wilde and Tegan Heywood.

“When questioned on what items they had in the house, Wilde admitted to cannabis, cocaine, two firearms, ammunition and knives being stored in the property.”

Police said officers located a Glock 48 pistol, 9x9mm bullets and body armor stored in a bag. They also located three 2-pound blocks of cocaine estimated to be worth around $32,000 to $47,000 each, wrapped in bags labeled Fendi. Further quantities of cocaine and cannabis were found in Wilde’s bedroom.

The police said they analyzed both defendants’ mobile phones and discovered “Wilde was heavily involved in the sale of drugs, and Heywood would often step in to provide the service when Wilde was unavailable.”

Police Constable Jenny Weeks of GMP’s Stockport Challenger Team said: “Although both Wilde and Heywood denied their involvement with the firearm and the supply of drugs, it became crystal clear they were lying, and they were both engrained into the chain.

“The drugs we seized will have ended up on the streets of Greater Manchester and these drugs not only have a devastating impact on not only those stuck within these supply chains, but also those who consume the drugs and the people who surround them.

“We will always do our utmost to ensure this type of activity is disrupted, and the perpetrators are identified and face the appropriate justice,” said Weeks.

Separately, two men were arrested and sentenced for their part in a nearly $83 million drug ring in early December 2021, after a package from Belgium was intercepted on its way to Greater Manchester, police said. The package contained 33 pounds of Class A drugs with an estimated street value of around $2 million, police said.