The biggest evolutionary benefit of early human food strategies may have been all the free time.
By Martin M Barillas January 19, 2022
Facebook
Twitter
Linkedin
Email 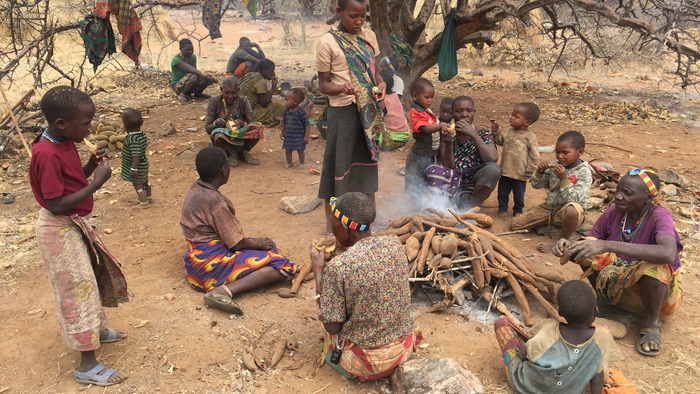 Early hunter-gatherers used risky strategies that promised great rewards as they sought food before agriculture was prevalent. But those rewards weren’t just in the form of calories — they also gained free time.

They spent more time and energy than great apes to find food, but they brought back calorie-rich things to eat — and share. The ability to share large meals afforded them time to rest and more time to accomplish other tasks, researchers say.

“Hunting and gathering is risky and inefficient, but the rate of return is enormous,” said Herman Pontzer, who teaches anthropology at Duke University. “We can share our food, and because we got so many calories before noon, we can hang out around each other in this new space, a free-time space.”

Human beings expend more energy than chimpanzees, orangutans and gorillas because we have large brains that require a far greater daily calorie intake, the researchers say. Also, humans live longer and have longer pregnancies that produce babies who rely on adults for years.

Researchers sought to find out how early humans obtained a high-calorie diet by comparing the energy budgets of the Hadza hunter-gatherer people of Tanzania and the Tsimané forager-horticulturalists of Bolivia to those of great apes.  While both groups gather wild animals and plants for food, the Tsimané also manage small-scale crops.

Energy budgets refer to caloric intake and expenditure and depend on how much food energy is absorbed and the time/energy expended to find food. Early humans were believed to have maintained their high-energy lifestyle by spending less time and energy seeking food as a result of using tools and techniques not used by primates.

In the study, published in the journal Science, the Hadza hunter-gatherers and the Tsimané forager-horticulturalists were shown to be highly intense but inefficient at foraging. The Hadza and Tsimané spend much more energy seeking food than great apes but tend to obtain it much more quickly. The result is highly caloric food. Therefore, they take risks for a maximum reward rather than minimizing their costs in their energy budget.

Great apes, however, which mostly eat fruits and plants rather than flesh, have a low-risk/low-reward strategy. While their food, such as leaves, is easy to find, it is high-fiber/low-energy in content, and it requires a great deal of time and energy to acquire enough to fulfill basic needs.

The Hadza and the Tsimané can also bring home enough food to share with the group.

Sharing, according to the study, offers a safety net while allowing some members of the group to hunt game and pursue other foods that involve great risk but also offer potentially great rewards. While they may be unsuccessful in their hunt, they can return to the group in the knowledge that there is other food to share. When there is surplus food, some members can stay behind and enjoy leisure time at the camp.

The theory that this “surplus time” led to cultural advancements has long been debated in anthropology. “This slight shift in the way that we go about getting our food has fundamentally made everything else possible,” Pontzer said. According to the study, having free time allows human beings to experiment, learn and create and feel free to communicate about matters unrelated to food.

Being accustomed to finding “energy bombs,” the authors claim, was and continues to be a good strategy for hunter-gatherers and forager-horticulturalists. But it can be a danger to modern people to freely raid refrigerators and cupboards full of highly caloric and delicious foods.

“We are hugely ravenous and inefficient, and that’s how we’ve evolved for 2 million years.” Pontzer said, “That doesn’t mean we can be careless with our energy today, and it doesn’t mean that we have to say, ‘well there’s nothing we can do about it’.” He recommended that modern people should be aware of the legacy of their evolutionary history.