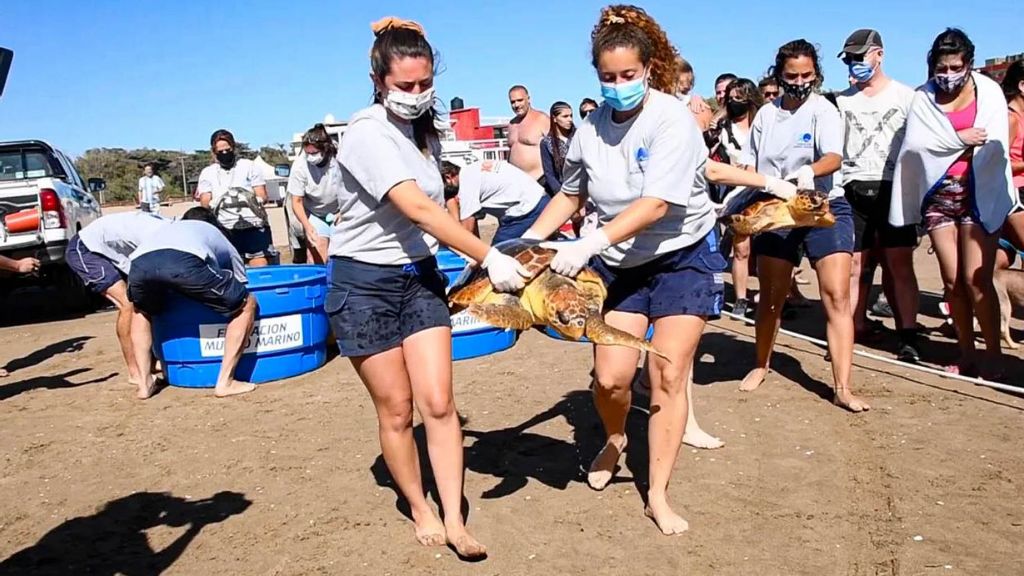 A sea turtle that made international headlines by expelling more than 10 different types of plastic was released back into the sea with five other rescued ones off the coast of Buenos Aries province in Argentina.

The six sea turtles, which included two greens and four loggerheads, were being treated at the rescue and rehabilitation center of the Mundo Marino Foundation in San Clemente del Tuyu.

The juvenile green sea turtle, which is about 14 inches long, was rescued in December and taken to the center, where it immediately began to defecate an alarming amount of manmade waste, including all the plastic.

A photograph of the scene shows fragments of plastic lids, hosepipe, nets, polystyrene, sachets, nylon, plastic seals, cellophane and other unidentified plastics, all of which were found in the turtle’s excrement.

“We observed that it still had foreign bodies both in its stomach and in the final part of its digestive tract, so it will probably continue expelling garbage in the coming days,” veterinarian Mauro Pergazere said.

The Mundo Marino Foundation has been looking after sick, oil-coated or stranded birds and marine animals since 1987.

The turtles’ return to the wild was carried out in front of a small crowd of onlookers, who filmed as the animals were carried down to the water and released into the waves.

“Here, it is important to recognize the commitment and responsibility of the fishermen, who, when these reptiles are found, are in charge of providing them with first aid and bringing them to a specialized rescue center,” Karina Alvarez, a biologist and head of conservation at the Mundo Marino Foundation, said in a statement.

Alvarez pointed out that turtles “expelling garbage was “something that is very recurrent and that we see repeated year after year” at the center.

“The importance of eliminating plastic has to do with avoiding both an obstruction and an intestinal perforation. In addition, in the case of obstructions, since these reptiles cannot evacuate well, an accumulation of gas is generated in the digestive tract that does not allow them to immerse themselves or dive correctly,” said Juan Pablo Loureiro, a veterinarian and technical director of the Mundo Marino Foundation.

Faced with this scenario, the turtles have difficulties both feeding themselves and migrating to warmer waters.

The loggerhead turtle is a species that, according to the International Union for Conservation of Nature’s Red List of Threatened Species, is “vulnerable.”

The experts said they believed the green turtle that arrived in Argentine waters had come from the volcanic Ascension Island, which is a British Overseas Territory. It houses the second-largest population of green turtles in the Atlantic Ocean, the Mundo Marino Foundation says. The green turtle is also classified by the IUCN’s Red List as “endangered.”