The nonprofit has rescued more than 2,000 people since the country fell to the Taliban in August 2021.
By Virginia Van Zandt January 17, 2022
Facebook
Twitter
Linkedin
Email 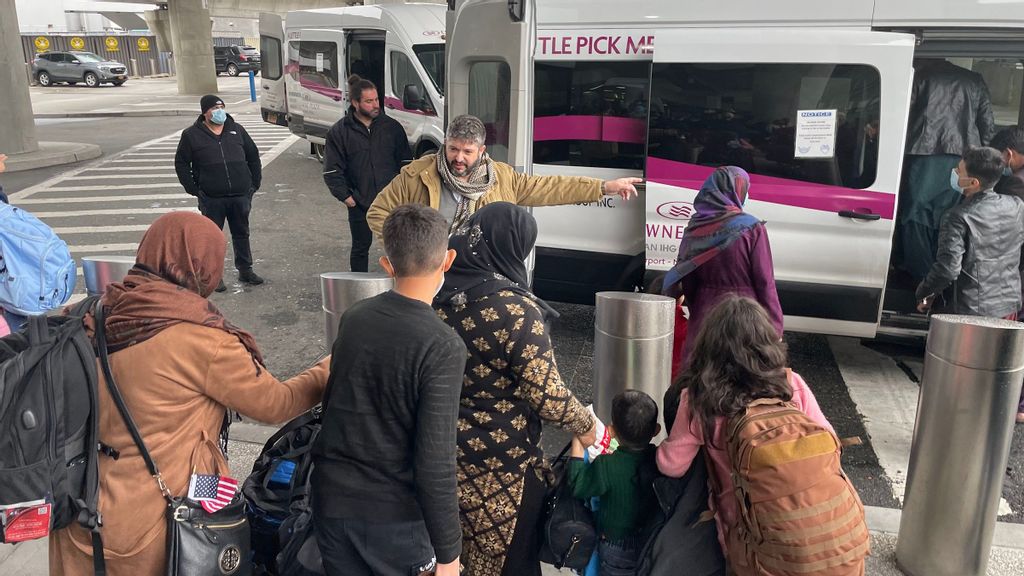 Mohammed Mojadidi is safely back home in Jacksonville, Florida, with his family after they spent six months stuck in Afghanistan in the aftermath of the tumultuous U.S. withdrawal in August 2021.

Project Dynamo came to their rescue in December in a mission that brought 47 American citizens and lawful permanent residents home.

Majodidi, his wife and four children, all U.S. citizens, traveled to Kabul six months ago for his father-in-law’s funeral. Mojadidi was able to return to work in the U.S. after the funeral, but he was not able to go back to Afghanistan in time to get his family out once the Taliban took over. He feared for the safety of his wife and four children.

“It took me almost a month [to return to Kabul],” he said. He finally made his way back on a commercial flight, but he couldn’t find a way to get his family out until he was referred to Project Dynamo, a nonprofit founded by current and former military members to rescue Americans from Afghanistan.

“They got us out in three days,” said Mojadidi.

He had hoped that the U.S. State Department could rescue his family before he got the referral to Project Dynamo.

“It felt like we were a million miles away from home. My kids lived there [Kabul] for six months, and it just felt like they were never going to get here.

“The good side of this is that my kids who weren’t really fond of school are studying really hard. For the first time I think they’re enjoying school,” said Mojadid, a financial adviser in Jacksonville.

Project Dynamo has rescued more than 2,000 people from Afghanistan since the country fell to the Taliban in August, according to Bryan Stern, one of the founders. Most of the evacuees were U.S. citizens, lawful permanent residents, or green card holders.

“These are legit people who follow the law, learn the process, follow the process and wanted to do it the right way. The idea that the reward for that is to leave them behind? I have a real problem with that,” said Stern.

Stern wants people to know that the evacuees are normal Americans, people who could be your neighbor or coworker.

One evacuee is a metallurgy engineer who lives in San Francisco.  Two families returned to their homes in Arlington, Virginia.

“These are citizens and green card holders. They’re normal folks. They have credit cards,” said Stern.

Stern said the hardest part of the missions was evacuating the children.

“On our last big flight, we had 100 or so people. Out of that 100, [there were] something like 59 children under the age of 11,” said Stern. “A lot of them are with single mothers whose husbands are in America. But the kids are hysterical. They give me gray hair, but they’re also a lot of fun.”

The missions, the last of which arrived in New York’s JFK airport a month ago, have been emotional.

“I’ve had grown, alpha Afghan men cry to me and kiss me. There is no shortage of thank yous when these things happen. We laugh together, we’ve cried together,” said Stern.

The nonprofit group must sort through thousands of applications and run them by the State Department before beginning to plan on-the-ground rescues. The process can take months.

“A lot of people don’t believe it,” he said, noting that many people had waited months.

Stern recalled meeting a family of nine who had been trying for green cards for years. The father drove the treacherous route from Kandahar to Kabul twice a month to make enough money for the application process (the average green card application costs $1,200) After meeting with Stern, the family was evacuated through Pakistan on a land-based mission planned by Project Dynamo.

“One of the reasons that Project Dynamo has been so successful,” he said “is because we took the time to drink the tea and have the coffee and smoke the hookah and eat the meals and meet the kids [in Afghanistan] and we did all the rapport building stuff in the 500 different areas that you need to do [in order] to do rescues, and that’s why we’re successful,” said Stern.

As with previous missions, the aviation costs were covered by Berry Aviation, a private company that has donated hundreds of thousands of dollars to Project Dynamo.

«Previous Post
Ozie Nzeribe Aims To Change The World As A Youth Advocate, Actor And Rapper»Next Post
Singer KELS: The Soul Of Pittsburgh