The newborn Sumatran tiger can grow as long as 12 feet and weigh up to 300 pounds.
By Lee Bullen January 16, 2022
Facebook
Twitter
Linkedin
Email 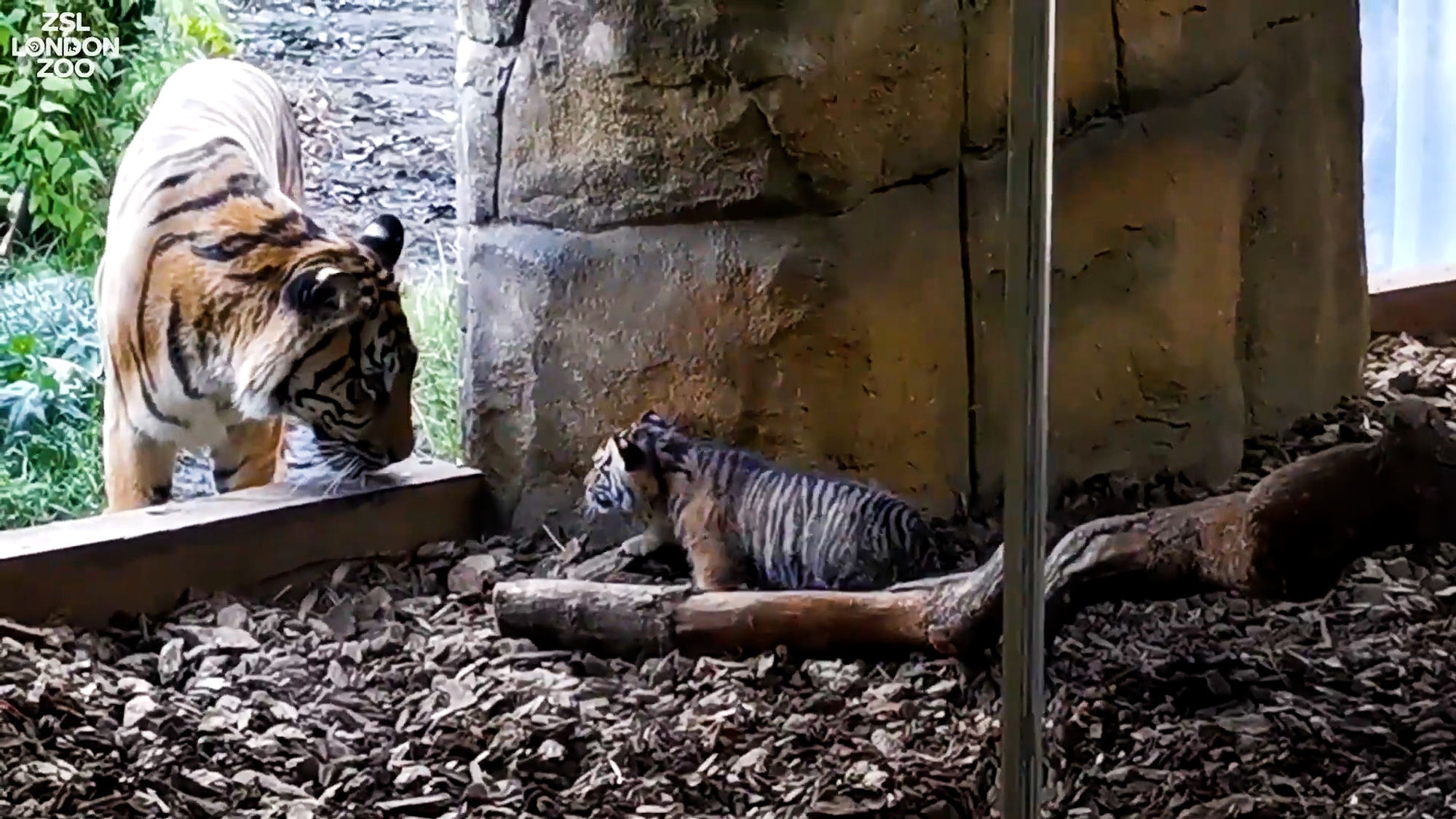 A Sumatran tiger cub took its first tentative steps outside its enclosure at the London Zoo.

The scene was filmed at ZSL London Zoo, the world’s oldest scientific zoo, in Regent’s Park, and the footage was shared on social media on Jan. 13 with the message: “Cute Alert! Brand-new footage from our zookeepers shows our adorable month-old tiger cub taking it’s very first wibbly-wobbly steps outside with proud mom Gaysha looking on.”

The zoo added: “Visitors may be lucky enough to catch a glimpse of our new arrival.”

The Red List of Threatened Species, compiled by the International Union for Conservation of Nature, categorizes Sumatran tigers as critically endangered.

“The cub has so far mostly stayed tucked up with Gaysha in their cozy behind-the-scenes cubbing den. But with such lovely weather yesterday, it’s clear she decided it was time for her little one to take its first steps in the outside world,” said London Zoo tiger keeper Kathryn Sanders.

“We were all holding our breath with excitement as the cub tottered around, using all its strength to clamber after mom. It was incredible to watch the youngster find its ‘tiger feet’ for the first time.”

The zoo will discover the as-yet unnamed cub’s gender at its first health check.

The World Wildlife Fund estimates the Sumatran tiger, the last of the Sunda island tigers, at fewer than 400 today. They survive in the remaining forests on the Indonesian island of Sumatra. The International Union for Conservation of Nature lists the tigers as a threatened species, due to poaching, habitat loss and human-wildlife conflict.

Carnivores, the Sumatran tigers hunt deer and wild pigs, but they will eat any available prey, including lizards, frogs, fish or crabs. Tigers, like all cats, have a specialized tongue with sharp structures called papillae. This allows the animal to clean meat from bones, as well as aid grooming.

Male tigers usually weigh 200 to 300 pounds, and females weigh between 180 and 300 pounds. Sumatran tigers grow 9 to 12 feet long, which includes the tail. In the wild, tigers usually live 10 or 12 years, but in zoos, they have a longer lifespan, according to Zoo Atlanta. They can live more than 15 years, which is considered old.

These animals are solitary creatures. The only exceptions are during mating, when males and females stay together for several days, or when females are with their cubs, which lasts about two years.