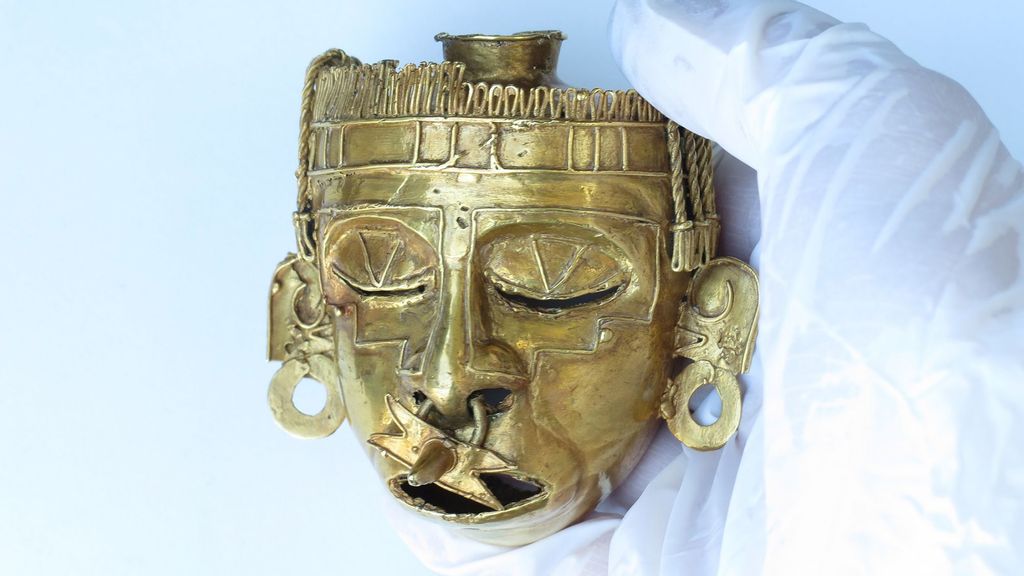 Restorers recovered shades and brightness in this Mixtec mask found in Tomb 7 of the Monte Alban archeological site in southern Mexico. (National Coordination for the Conservation of Cultural Heritage, National Institute of Anthropology and History/Zenger)

Restorers in Mexico have brought ancient Mixtec artifacts discovered in a tomb back to life by turning them from a dull black to their original shining colors.

Discovered in tomb number seven at the pre-Columbian archeological site of Monte Alban, the gold and silver ritual objects and ornaments date from A.D. 1250 to 1521. The Mixtecs were indigenous Mesoamerican peoples who lived in what is now southern Mexico.

Restorer Sara Eugenia Fernandez Mendiola of Mexico’s National Institute of Anthropology and History and conservation specialists removed layers of dirt and corrosion from the pieces, which are now part of a 200-object collection, including clothes, on display at the Museum of Oaxacan Cultures in Oaxaca de Juarez, Mexico.

“In ancient Mexico, it was believed that gold was secreted by the sun and was associated with the eternal due to its low changeability. Likewise, it was thought that the moon secreted bright silver,” Fernandez said in a statement.

She, Patricia Ruiz Portilla and Diego Jauregui Gonzalez were able to bring out several shades of gold from an almost greenish color to a reddish-yellow tone, based on the amount of silver and copper present, in several pieces including pectorals, earrings, rings, ear plugs, bracelets, clips, brooches and bells.

“We analyzed more than 3,600 beads that make up the 69 necklaces, bracelets and strands of this collection, defining 14 sizes in the smooth and decorated spherical beads, starting with the smallest (with millimeter diameters) and go in increasing order until they reach several centimeters. Likewise, 16 types of bells of varied shapes and sound qualities were defined,” the office of Mexico’s secretary of culture said in a statement.

The “association of gold with the divine, expressed in the objects of that deposit, has been studied by various researchers,” the statement added.

The experts used magnifying lenses, special lights, a stereoscopic microscope and also took X-rays to investigate the pieces on the inside to then determine how best to restore each object.

“It is essential to continue with the dissemination of these cultural assets that bear a wonderful artistic language. Their shiny surface reflects a worldview that survives among the Mixtec people; their mythical, dual and sacred origin is an important link between the ancestors of that society and its current heirs,” Fernandez said.