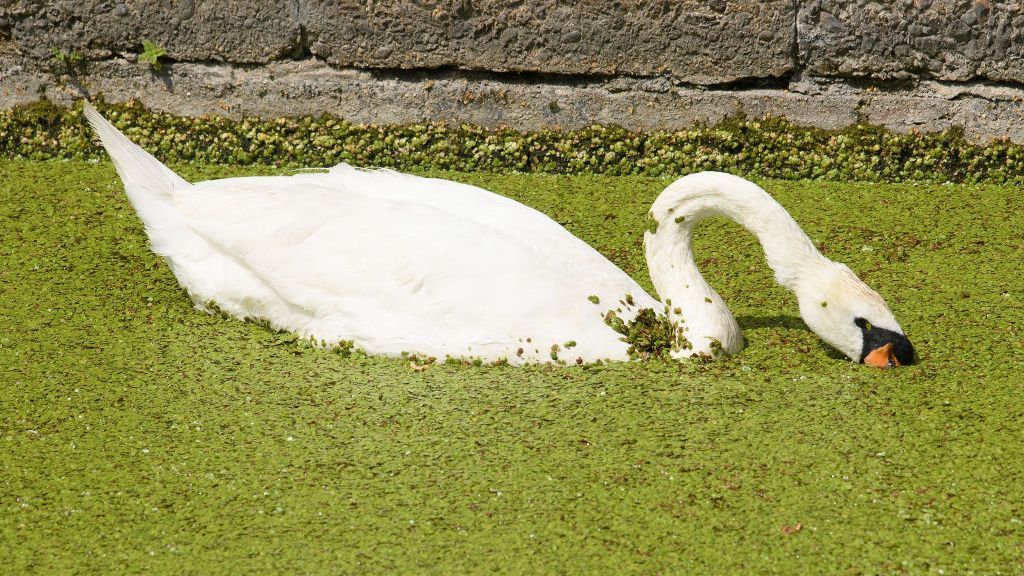 Duckweed is high in polyphenols and regular consumption is linked to reduced signs of brain atrophy.  (Leon Neal/Getty Images)

A green Mediterranean diet, high in polyphenols and low in red and processed meat, appears to slow age-related brain atrophy, according to a new international study led by Ben-Gurion University of the Negev.

The 18-month long randomized control trial among 300 participants from the Nuclear Research Center in Dimona, is one of the longest and largest brain MRI trials in the world.

Participants were chosen based on abdominal girth, and high cholesterol levels, and divided into three groups according to diet, and whole brain MRI measurements were taken before, and after the trial.

One group ate a regular healthy diet, another the Mediterranean diet, and the last a green Mediterranean diet — which included high polyphenol green components: 3-4 daily cups of green tea and a daily green shake of Mankai duckweed, as a substitute for dinner, with minimal consumption of red and processed meat. Walnuts, which are high in polyphenols, were also provided to the Med-diet participants.

All three groups were given free gym memberships and participated in physical activity programs based on aerobic exercise.

The trial, which was published in The American Journal of Clinical Nutrition, was led by Dr. Alon Kaplan and Prof. Iris Shai, professor at Ben-Gurion University and adjunct professor at Harvard University, together with several international teams of brain experts.

This is the first time scientists have explored the effect of diet on age-related brain atrophy, and they were surprised to discover a dramatic reduction in brain atrophy over the 18 months in those who adhered to both Mediterranean diets; with greater magnitude in the green-MED group, specifically among participants over age 50.

In addition, they noticed that an improvement in insulin sensitivity was independently associated with attenuated brain atrophy.

“The beneficial association between the green Mediterranean diet and age-related neurodegeneration might be partially explained by the abundance of polyphenols in plant-based food sources which have antioxidant and anti-inflammatory metabolites,” said Shai, the lead author.

“Polyphenols can cross the blood-brain barrier (BBB), reduce neuroinflammation, and induce cell proliferation and adult-onset neurogenesis in the hippocampus.”

“Our findings might suggest a simple, safe, and promising avenue to slow age-related neurodegeneration by adhering to a green-Mediterranean diet,” adds Kaplan.

This is not the first time employees at Dimona have taken part in large diet-related studies. Employees at the remote workplace do not leave the premises during the day, and lunch is provided on site.