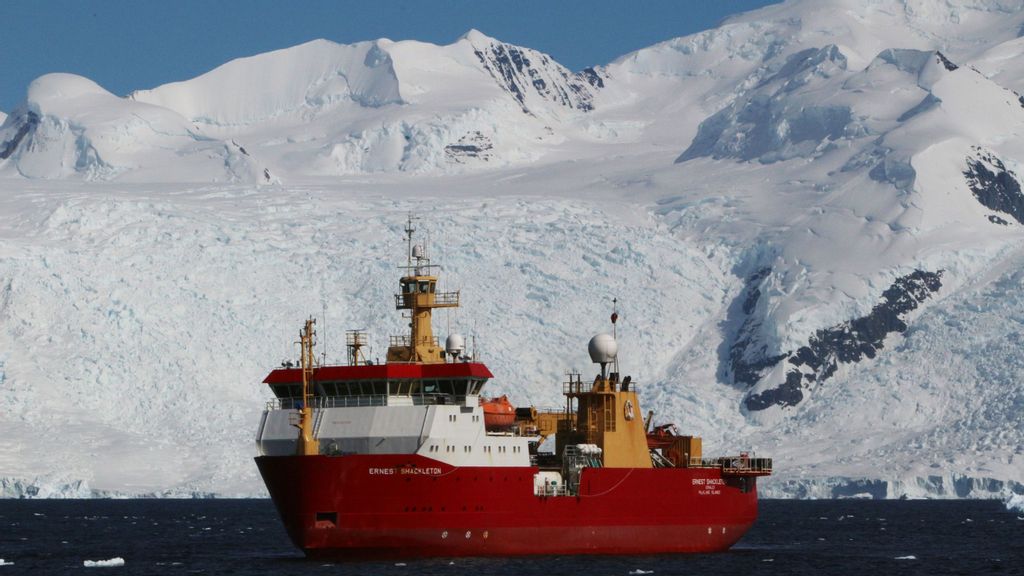 Non-native species have been getting attached to ships such as the British Antarctic Survey research ship Ernest Shackleton for a ride to Antarctica, posing a threat to local species. (Lloyd Peck)

Invasive species from around the world are hitchhiking on ships visiting Antarctic waters, bringing with them a threat to native species.

Fishing, research, supply and tourism ships from 1,581 ports linked to Antarctica may be transporting algae, barnacles, crabs and mussels. These species attach themselves to the ships’ hulls in a process dubbed “biofouling” that exposes the once pristine continent to visitors from around the world.

“Invasive, non-native species are one of the biggest threats to Antarctica’s biodiversity — its native species have been isolated for the last 15-30 million years. They may also have economic impacts, via the disruption of fisheries,” said Professor David Aldridge of Cambridge University.

Aldridge is a co-author of a new report about the ship-traffic threat to Antarctica that appeared in the online journal PNAS.

Of great concern are species from the North Pole region, which are already adapted to a cold climate, that hitch rides on research or tourist ships spending time in the Arctic before heading to the Antarctic for the antipodal summer season.

“The species that grow on the hull of a ship are determined by where it has been. We found that fishing boats operating in Antarctic waters visit quite a restricted network of ports, but the tourist and supply ships travel across the world,” said study co-author Arlie McCarthy of Cambridge University and the British Antarctic Survey.

Research vessels stay longer in Antarctic waters, the report found, than ships on tourist jaunts. But fishing and supply vessels stay even longer. Researchers had already found that the longer the stay, the more likely that invasive species will take hold.

“We were surprised to find that Antarctica is much more globally connected than was previously thought. Our results show that biosecurity measures need to be implemented at a wider range of locations than they currently are,” McCarthy said. Although there are strict regulations intended to bar invasive species, McCarthy said their success “relies on having the information to inform management decisions.”

The researchers hope that the study may help in detecting non-native species before they become problematic.

The study used port call data and satellite observations from 2014–2018, which showed the ships sailed most frequently from southern South America, Northern Europe and the western Pacific Ocean to Antarctic waters. The Southern Ocean surrounding the icy continent is the Earth’s most isolated marine environment, supporting a fragile and unique ecosystem of plants and animals. So far, it has no known invasive species. But additional ship traffic is increasing the likelihood of accidental introduction of non-native plants and animals.

Invasive species may endanger the Southern Ocean’s krill fisheries. Krill are tiny shrimp-like crustaceans that are at the bottom of the food chain and are consumed by species ranging from baleen whales and penguins to fish and squid. They are also important as human food because they are used in feeding fish in aquaculture and in the pharmaceutical industry. A drop in the biomass of krill could lead to starvation for filter feeders, such as the gigantic blue whale.

“Biosecurity measures to protect Antarctica, such as cleaning ships’ hulls, are currently focused on a small group of recognized ‘gateway ports’. With these new findings, we call for improved biosecurity protocols and environmental protection measures to protect Antarctic waters from non-native species, particularly as ocean temperatures continue to rise due to climate change,” said researcher Lloyd Peck of the British Antarctic Survey.